If your kid starts complaining of an itchy head, be very afraid. Within days, your household could start to feel like something out of a B-movie: Invasion of the Super Lice.

The lowly head louse has evolved. Hardy and resilient, today's lice are increasingly immune to the neurotoxins used in medicated shampoos. Like antibiotic-resistant bacteria, these mutant parasites are getting tougher to wipe out.

Scientists have identified three genetic mutations that affect the insect's nervous system, making it less vulnerable to pyrethroids – the pesticides used in most over-the-counter lice treatments.

Lice with these mutations have spread throughout North America, said Kyong Yoon, an assistant professor of biological and environmental sciences at Southern Illinois University at Edwardsville. The new breed of lice is more likely to survive our chemical warfare, he said: "It's natural selection."

Parents, meanwhile, are discovering they are losing the main tool in their lice-busting arsenal, after years of relying on pesticide shampoos and inadvertently helping lice get stronger.

Kyra Cocco of Vancouver said her two children had lice repeatedly over a three-month period about two years ago. Lice infestations kept sweeping through her daughter's kindergarten class for a total of six months, she said.

Cocco used an insecticide shampoo on her children's hair for longer than recommended on the bottle, but after the treatment, she still found live lice.

She repeated the treatment as directed and kept inspecting her daughter, then 5, and son, 2, for lice and nits (eggs) each day. Cocco said it would take her three to four hours per child to comb through their thick curly hair.

"It was a nightmare," she said.

Over the past 10 years or so, lice resistance to topical insecticides has become the most common cause of treatment failure, according to numerous studies.

Overuse of pyrethroids since the early 1990s has led to "knockdown resistance," which means the insects no longer wriggle their legs in the air and die shortly after pesticide exposure, said Yoon, a world expert on genetic mutations in lice.

Evidence of knockdown resistance "is almost at saturation levels," he said.

In a study released in August, Yoon and colleagues collected head lice samples from individuals in 30 U.S. states. Out of 109 head lice populations, all but five showed high levels of mutations associated with lower effectiveness of pyrethroids.

In a 2012 study, Canadian researchers analyzed head lice from 92 participants in Ontario, Quebec and British Columbia. They found that 97 per cent of the head lice showed these mutations.

To be clear, these studies did not prove that lice can no longer be killed with pyrethroids. But as Yoon pointed out, previous research has shown that these mutations increase the chances that lice will bounce back after pesticide exposure. "All of them tend to be less sensitive to a degree."

Yoon does not recommend using larger amounts of an over-the-counter product, however. Even though pyrethroids are considered safer than many other pesticides, "you're dealing with your child's head."

Children exposed to a large amount of pyrethroids on the skin may get feelings of numbness, itching, burning, tingling or warmth that could last for a few hours, according to the U.S. Centers for Disease Control and Prevention.

As medicated shampoos lose their potency, parents such as Cocco are resorting to the ancient art of nitpicking. For many, exterminating lice has become a Sisyphean task.

Cocco ended up cropping her kids' hair short when the lice returned for the fourth time in three months. She credits meticulous combing and spraying with an aromatherapy product for eradicating the pests. She added that she wouldn't try a chemical shampoo again, "because it does nothing," she said.

Public health agencies do not collect data on the prevalence of lice infestations, since head lice do not communicate diseases or pose a risk to human health. But since children have a high risk of multiple infestations in the school years, professional nitpickers insist that physical removal is a safer and more effective alternative to pesticides.

"Those products only address the mature live lice," said Darlene Miller, president of the Greater Vancouver Lice Clinic. "They have no effect on the nits themselves or the newborn babies." By combing through wet hair with a high-quality nit comb, "you can address both problems at the same time."

She added that medicated shampoos tend to irritate the scalp "and sometimes it's hard to distinguish whether you're itchy because you have an active case of head lice or because you're having a reaction to the pesticide you've used."

Nevertheless, the Canadian Paediatric Society continues to recommend over-the-counter products as well as prescription lice treatments, which are more expensive and involve a doctor's visit.

Dr. Joan Robinson, a spokesperson for the society, noted that parents are strapped for time. "I think it's much simpler to use a topical product than to sit there and pick out all those nits."

Yoon cautioned that unless the public stops relying mainly on pyrethroids, head lice may develop other protective mechanisms in addition to knockdown resistance. Once this happens, he said, "it will be almost impossible to control this insect with pyrethroids any more."

In the meantime, he said, parents should realize that if they use an over-the-counter product to zap lice, "they are contributing to the resistance problem."

Wet combing is a tried-and-true method of clearing up head lice without using chemicals, says Darlene Miller, president of the Greater Vancouver Lice Clinic. Here's how to do it at home:

1. Saturate dry hair with a liberal amount of creamy white hair conditioner. Use a regular comb to detangle hair.

2. Using a high-quality nit comb, such as the LiceMeister, comb through smaller centimetre-wide sections of hair, one at a time, working from the hair root to the tip on both the underside and topside of the hair.

3. After each pass through the hair, wipe the comb onto a white cloth and check for live lice and nits (eggs), which look like specks of yellowish or tan-coloured sand.

4. Continue the technique though each hair section and then do a final comb through of the entire thickness of the hair, all around the head.

5. Rinse out the conditioner and wash all tools in hot soapy water.

Wet combing is time-consuming, but needn't be done every day. A high infestation with thousands of nits and hundreds of adult lice may require wet combing every three to four days, Miller said. For mild to moderate cases, she recommends wet combing once every five to six days. That should be enough to interrupt the insect's reproductive cycle and remove nits and juvenile lice before they grow into egg-laying adults.

A head is considered clear when no lice or nits have been found after two wet-combing sessions, 10 days apart. After that, Miller recommends inspecting a child's dry hair once a week for any signs of an infestation and "making it a part of the family's hygiene routine."

Germs and infections to prepare for as kids head back to school
August 18, 2015 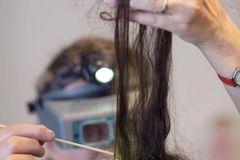