Regulators in the United States have officially granted permission for the first human clinical trial of Canada's experimental Ebola vaccine, a step that comes as experts from around the globe convene in Geneva to figure out how and to whom the world's minuscule supply of barely tested Ebola drugs should be distributed.

NewLink Genetics Corp., the Iowa-based drug company the Public Health Agency of Canada licensed to produce the vaccine, announced Thursday that it has received approval from the U.S. Food and Drug Administration to start Phase 1 safety trials, the first of which is expected to be conducted south of the border in the coming weeks and involve about 40 healthy adult volunteers.

Subsequent human trials will also take place in Switzerland, Germany, Gabon and possibly other countries, said Brian Wiley, the vice-president of business development for NewLink Genetics, which sent representatives to the meeting in Geneva.

"These will all be Phase 1 trials in healthy volunteers and enroll between 40 and 100 patients each and will test the safety of the vaccine as well [as] measure whether volunteers develop the same levels of antibody response shown in monkeys that were protected against the virus in preclinical studies," Mr. Wiley saidby e-mail.

Canada announced in mid-August that it would donate to the World Health Organization (WHO) between 800 and 1,000 doses of an experimental vaccine developed at the National Microbiology Laboratory (NML) in Winnipeg, where the doses remain in storage.

Since then, the Ebola crisis in West Africa has grown steadily worse, with the WHO now reporting a death toll of nearly 1,900 and warning the outbreak could kill as many as 20,000 and take as long as nine months to quell.

That bleak assessment means there could still be time for experimental drugs – which are in short supply and generally take months to make – to be used more widely used during this outbreak, although the WHO has been careful to stress that supportive health care and the tracking of each patient's contacts is the best way to halt the virus.

"We need to try to see what we think is logical based on scientific evidence, feasible based on the very challenging logistics, and, of course, ethical in terms of compassionate use care," Daniel Bausch, a professor in the department of tropical medicine at the Tulane University School of Public Health and Tropical Medicine in New Orleans, said in an interview before the Geneva meeting, which he is attending as an adviser.

"And then we need to try to learn all we can but I don't think that can be an impediment [to offering experimental drugs.]"

The Canadian vaccine, known as VSV-EBOV, is one of two potential vaccines and eight possible treatments that are being examined in depth at the Geneva conference Thursday and Friday.

Ten Canadians were scheduled to participate in the meeting, including Gary Kobinger, the chief of special pathogens at the NML.

Two of the most promising therapies on the agenda have a Canadian connection: TKM-Ebola, an anti-Ebola RNAi therapy, is being developed by British Columbia's Tekmira Pharmaceuticals Corp.; and ZMapp, a cocktail of monoclonal antibodies, was developed by scientists at the NML.

In a draft background document assessing the benefits and risks of 10 experimental tools, the WHO recommends the Canadian vaccine be "considered" for use, pending human safety trials – a less enthusiastic rating than the "definitely consider" bestowed on the other leading vaccine candidate, which is based on a chimp cold virus and is being developed by drug maker GlaxoSmithKline Inc. and the U.S. National Institute of Allergy and Infectious Diseases.

The WHO document also points out some of the logistical difficulties in delivering experimental drugs in poor countries where health-care systems have collapsed. Both vaccines need to be stored at -70 C, which requires special freezing facilities using liquid nitrogen.

TKM-Ebola and ZMapp are both delivered intravenously, meaning staff expertise and supplies to hang an IV bag are necessary.

Fewer than 30 treatment courses of TKM-Ebola are available, but 900 or so could be made by the first quarter of next year, the document says. A few hundred doses of ZMapp – which has run out after being given to at least seven patients – could be ready by the end of this year, it says.

As for who would be first in line for the experimental drugs, the document concludes by saying only that "given the very limited quantities available, it is anticipated that first treatment or vaccine doses will be allocated according to [a] transparent process."

However, the document is a draft and more details are expected Friday when the meeting wraps up. 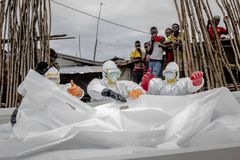 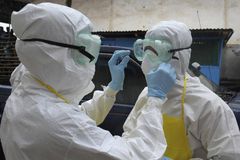 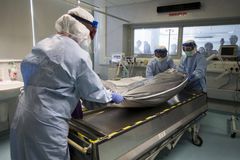