There's mounting evidence that getting too little sleep night after night is a risk factor for abdominal weight gain and obesity. Theories as to why weight gain occurs include hormonal changes, a slower metabolism and an increased desire for unhealthy foods.

Now, new research from King's College London in Britain suggests that going to bed earlier and sleeping longer can help you reduce your intake of added sugars by 2 1/2 teaspoons (10 g) a day.

The randomized controlled trial, published last month in the American Journal of Clinical Nutrition, enrolled 42 healthy adults, ages 18 to 64, who were habitually short sleepers, meaning they slept less than seven hours a night. Its aim was to determine if counselling people about sleep habits could increase sleep duration and, if so, whether sleeping longer influenced diet.

For the study, half of the participants were assigned to the "sleep extension" group. They met with a health psychologist and received personalized sleep advice.

Participants were given a list of four sleep-hygiene behaviours most relevant to their lifestyle, such as avoiding caffeine late in the day, not going to bed too full or too hungry, establishing a relaxing bedtime routine and maintaining a consistent sleep schedule. They also keep detailed food and sleep diaries.

Nearly 90 per cent of those who received personalized sleep advice increased time in bed by about one hour, and half increased their sleep duration, ranging from 52 to 90 minutes.

Extending sleep patterns led to a healthier diet. Compared with their usual diet, participants in the sleep-extension group reduced their intake of added sugars by 10 g a day and improved their overall healthy diet score.

The study isn't without limitations. The use of self-reported food diaries is prone to error; people may underreport their true food intake.

The study was also short (four weeks), making it impossible to know if improvements to sleep habits and sugar intake persisted.

Even so, the new findings strengthen the link between too little sleep and poor diet uncovered by previous studies.

A 2017 review of randomized controlled trials found that people consumed an additional 385 calories when partly sleep deprived. Research has also revealed that reducing sleep from 8.5 hours to 5.5. hours a night caused people to consume more calories from carbohydrate-rich snacks, particularly in the evening.

Lack of sleep has also been shown to increase blood levels of ghrelin, a hunger hormone that stimulates appetite and eating, as well as cortisol, a stress hormone associated with abdominal obesity.

Getting adequate sleep is also thought to dampen the brain's reward pathway that drives food intake when presented with unhealthy foods.

Research suggests that compared to normal sleep, sleep deprivation may reduce they body's resting metabolic rate by 20 per cent. As much as 75 per cent of your daily calorie-burning comes from the calories you burn at rest.

What to eat to sleep better

If you don't get the recommended seven to nine hours of sleep each night, consider your diet. While a lack of sleep can impact your food choices the next day, what you eat can also influence how well you sleep.

Missing out on REM sleep can cause daytime drowsiness and poor concentration.

Keep your evening meal small and eat it least three hours before bedtime to prevent digestive upset that can keep you awake.

Leslie Beck, a Toronto-based private-practice dietitian, is director of food and nutrition at Medcan.

Will a soup cleanse help me safely lose weight?
February 18, 2018 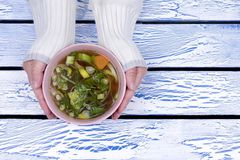 Soy, coconut, almond or rice: How do non-dairy ‘milks’ stack up nutritionally?
February 2, 2018