TORONTO — Parkinson's medication and protein don't get along.

Most Parkinson's patients take the medication levadopamine. But if they take levadopa, as it's known, too soon before or after eating protein-rich foods, the drug and the protein fight each other to get taken up into the blood stream.

The protein always wins, leaving patients with far less bang for the medication buck than they expect or need. So at many stages of Parkinson's, patients may be urged to follow what is called a protein redistribution diet, with daytime meals light on protein and a protein-heavy evening meal to compensate.

The idea is to time the medication and meals in such a way as to maximize the impact of the drug, which helps Parkinson's patients control tremors and stay in an "on" state physically and mentally during the day.

Dopamine is a chemical that permits parts of the body to communicate with each other — allows the brain to send a message to the hand to twist a doorknob or squeeze a tube of toothpaste, for instance. With Parkinson's disease, the brain cells that make dopamine start to die.

Synthetic dopamine — levadopa — can top up brain levels. But because of vagaries like how the medication interacts with a person's diet, it is hard to keep consistent levels of dopamine in the system, explains Dr. Galit Kleiner-Fisman, a neurologist who specializes in movement disorders.

"We never get it quite right. So we kind of overshoot and undershoot. And as time passes, people have this kind of rollercoaster like day where they take their pills, they kick in, 20 minutes later they're mobile," she says.

"But then they might be hypermobile and they're moving around too much. Then when the medication wears off they become frozen, they can't move. Then they have to take medication and wait for it to kick in again. And it's really debilitating."

Making sure diet isn't getting in the way of the drug helps to even out the peaks and valleys of the disease's symptoms. But protein redistribution can be easier said than done, says Julia Gluck, 63, who is the primary caregiver for a Parkinson's patient — her husband, Ted Overton, 76.

Overton takes his medication every three hours. He cannot eat for two hours before taking levadopa, and should wait 30 to 45 minutes after taking a pill before eating food with protein. That leaves a tiny window in which to eat a breakfast with eggs, for instance.

Should anything go wrong — a restaurant order taking longer to arrive than anticipated, or a friend arriving late for lunch — the schedule can fall apart pretty quickly.

"I tell you, to manage this and keep his energy up is really a challenge," Gluck says.

Help is on the way, thanks to a collaboration between Kleiner-Fisman's clinic — the Jeff and Diane Ross Movement Disorders Clinic — and George Brown College, both in Toronto.

It comes in the form of a new website called Live Well With Parkinson's, which offers a variety of tips and strategies for people coping with the disease. The site is to go live on June 20.

Among the offerings is a scheduling tool which will allow patients or their caregivers to plug in information like body weight and levadopa dosages and schedules. The tool will generate a daily plan that shows people taking the medication how much protein they can have and when they should consume it during the day to meet their nutritional needs.

Gluck can't wait for the scheduling tool to be available online. "I'm thrilled," she says, noting that while protein redistribution isn't rocket science, she and Overton haven't found it easy to do.

Kleiner-Fisman isn't surprised. The president and guiding force behind the website, she is the medical director of the movement disorders clinic, which based at the Baycrest Centre for Geriatric Care. She knows from years in the field that a protein redistribution diet can be hard for patients to adhere to.

"It can become really complex for people because they may be taking medications every three hours. Or maybe even every two hours, depending on where they are in their condition. And so there's never a time where medications and food don't potentially interact," she says, adding that many people simply give up.

Complicating issues further is the fact that many people don't understand that protein comes from a variety of sources, not just meat, fish or eggs. Many other foods contain protein. So what, beyond fruit, are the options open to people who are trying to limit the protein they eat during the day?

That's where George Brown College comes into the equation. Students from the school's culinary management nutrition program were recruited to come up with some protein-light breakfast, lunch and snack recipes, as well as some protein-dense dinner suggestions.

Winnie Chiu, director for the innovation and research studio in the college's centre for hospitality and culinary arts says most people don't know that a slice of bread or a cup of broccoli each contain three grams of protein.

People on the redistribution diet are told to restrict themselves to between seven and 10 gms of protein through the day, with 40 or so in the evening.

The students needed to be creative, Chiu says, to find work-arounds to make foods like zucchini and chocolate cranberry muffins (the recipe calls for gluten-free flour) or vegetable stew (thickened with cauliflower).

"One of the challenge is if they need to use alternative ingredients, they need to ensure that the taste and textures and other attributes of the recipe profile do not change," Chiu says.

The idea was to create recipes that are simple enough that people with Parkinson's or their caregivers could easily make them at home. They also have to be tasty and in the case of the snacks, transportable, like fruit bars made with tapioca flour that contain only a single gram of protein per serving.

Controlling how much protein one consumes and when can really make a difference, says Keith Goobie, 53, who has Parkinson's.

Diagnosed with the disease in April 2010, Goobie was initially skeptical of the idea that the efficacy of his medication could be eroded by what he ate and when he ate it. But over time, he has become convinced.

So has Roslyn Patrick, 53, his wife. "It makes a huge difference when he takes his protein. It's very obvious to me, because I'm hypersensitive. But to others as well. They'll say: 'Oh, his pill didn't really take effect.' ... It is noticeable."

Says Goobie: "It's the difference between talking to a rocket scientist and a dummy at times." 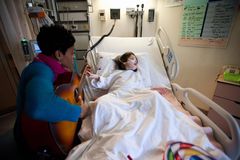