I’m getting bored with brown rice and quinoa. What other healthy gluten-free grains do you recommend?

If you’re following a gluten-free diet, brown rice and quinoa are go-to grains for carbohydrate and fibre. If you’re in a rut, though, there are grain alternatives that also deliver on the nutrition front. And if you eat quinoa for its protein content, two other gluten-free grains have even more.

Even if you don’t avoid gluten, grains such as amaranth, buckwheat, millet and teff are worth adding to your diet. You’ll find them in large grocery stores and natural-food stores (Bob’s Red Mill offers a wide selection). Here’s how they stack up nutritionally, how to cook them and how to add them to your diet.

This nutty-tasting tiny grain – actually a seed – originates from South America where it’s a staple food. Amaranth is a good source of protein (it’s got more than quinoa), dietary fibre, iron, calcium, magnesium, copper and manganese. It’s also a source of complete protein, meaning it contains all the essential amino acids – the building blocks of protein – the body can’t make on its own.

Amaranth can be cooked as a cereal, popped like popcorn, sprouted or toasted.

Despite its name, buckwheat is not a type of wheat. In fact, it isn’t even a grain seed – it’s the seed of a fruit that is related to rhubarb and sorrel. (It’s considered a grain because that’s how it is classified in the culinary world.) Buckwheat is a good source of fibre, B vitamins, magnesium and zinc.

To cook, add 1 part buckwheat groats to 2 parts water. Bring to a boil. Reduce heat, cover and simmer until tender, about 12 minutes.

Enjoy cooked buckwheat as porridge topped with fruit and Greek yogurt. Use buckwheat instead of brown rice in pilafs and stuffed peppers. For salad, mix cooked buckwheat with lentils, chopped red pepper, parsley and a little goat’s milk cheese. 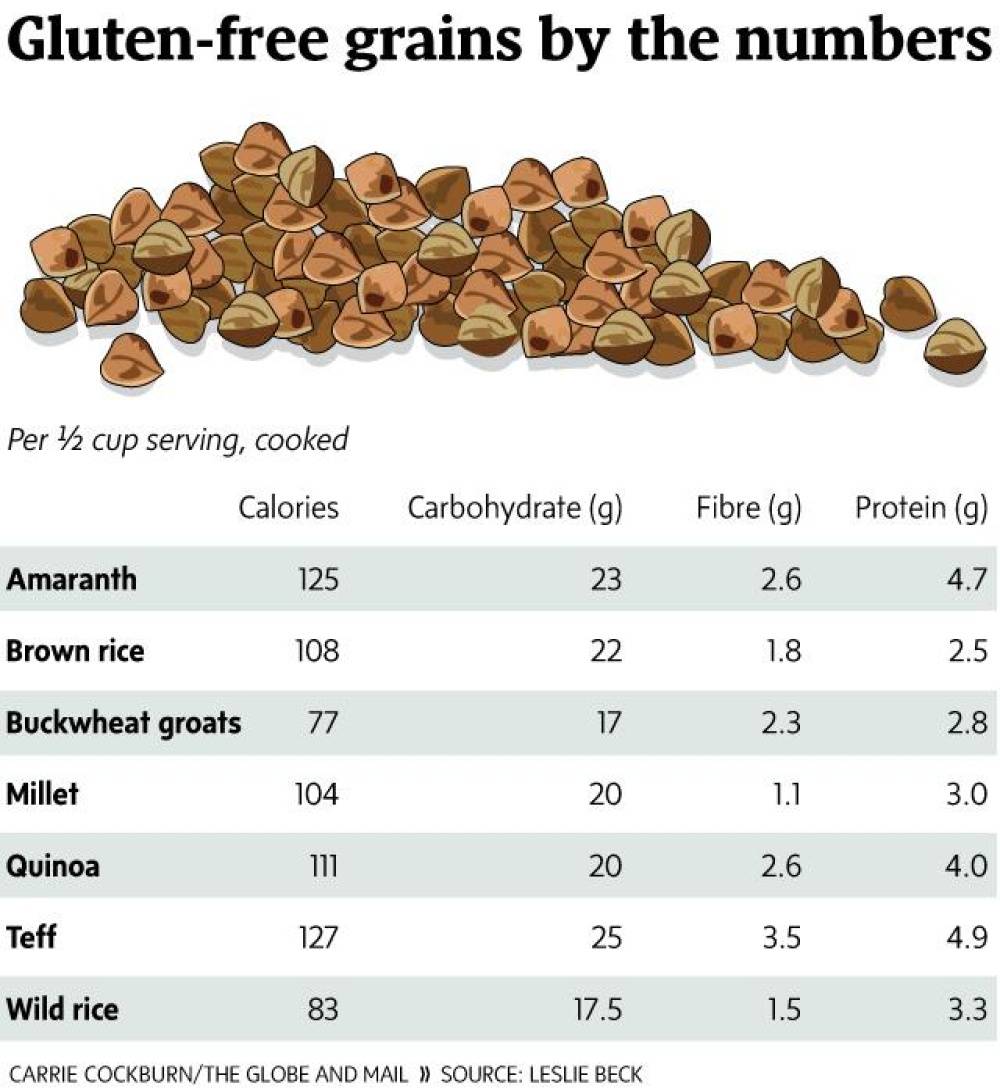 About the size of a mustard seed, millet was first farmed 10,000 years ago, predating rice and wheat in parts of Asia, India and Africa.

The tiny, pale yellow grain is a good source of B vitamins, iron and essential amino acids.

To cook, add 1 part millet grains to 2.5 parts boiling water or low-sodium broth. Cover, return to a boil, then simmer for about 25 minutes, stirring occasionally. For a nuttier flavour, toast millet grains in a dry skillet before cooking.

Millet’s mild flavour makes it versatile. Serve it as a hot breakfast cereal or as a side dish instead of mashed potatoes. Add uncooked millet grains to muffin and quick-bread batters for a little crunch.

A type of millet, teff is a staple food in Ethiopia where it’s made into a sourdough flatbread. This tiny grain is very high in resistant starch, a type of fibre that helps control blood sugar and body weight and maintains digestive health.

As far as grains go, it’s also a decent source of minerals including calcium, magnesium, potassium and zinc.

To cook, add 1/2 cup teff grains to 1.5 to 2 cups of boiling water. Cover, reduce heat and simmer until water is absorbed, about 20 minutes.

Teff grains – red, brown or white – range in flavour from mild and nutty (white) to sweet and molasses-like (brown). The grain can be cooked as porridge, used as an ingredient in muffins and baked goods, made into polenta, and mixed with other grains in salads and pilafs. Cooked teff also works well added to burgers and meatloaf.

Leslie Beck, a registered dietitian, is based at the Medisys clinic in Toronto. She can be seen every Thursday at noon on CTV News Channel’s Direct; lesliebeck.com.