And so, the great concussion debate is entering its most delicate, difficult – and potentially most dangerous – stage.

Now that we know what it is, what do we do about it?

A new scholarly paper published this week by two Canadian experts in head injuries is calling for nothing less than a complete transformation of all sports, soccer included, where contact to the head poses a health threat.

Not only that, but the authors of the paper, which appears in Neurosurgeon, the online publication of the American Association of Neurological Surgeons, argue that society has an ethical responsibility to move beyond more research and discussion and act.

They argue that the facts have been well established and it is now time for society to make an "urgent statement" on the issue.

Echlin believes it's not about improved helmets and mouthguards but about changing the very sports that society has come to treasure.

"It's about a shift in the way that we allow our youth to play games."

That means "dramatic rule changes," the paper argues. The intention would be to "eliminate all purposeful and intentional head contact."

And this, of course, is where the shouting begins.

There is little doubt that there is some "concussion fatigue" out there. NHL teams avoid the very use of the word "concussion," preferring to call it "whiplash" or, more often, saying nothing at all.

Equally, there is no doubt it is a genuine issue.

There have been lawsuits launched by former professional football players and college players who suffered head injuries, by NHL players and, most recently, a class-action suit launched by soccer parents and players in San Francisco against FIFA and various U.S. soccer organizations.

What, then, is the answer? Can you pay out hundreds of millions of dollars, as the NFL did, and hope it goes away? Can you stop youngsters from playing the games they love? Do we need helmets on soccer players and divers?

Or, the largest question of all, can you change the game but keep the sport?

Echlin and Upshur muse about increasing playing surfaces and decreasing the number of players. The "header" could, conceivably, be banned in soccer – but would it then be soccer? And what of football – do you eliminate the line?

The ridicule will come, and is fully expected, but there is a growing sense that the research is in and conclusive – contrary to what U.S. President Barack Obama's recent Concussion Summit suggested – and that it is time for action.

Echlin and Upshur hope that comes from parents, coaches and children themselves, but others are convinced it will need to come from the top down or change will never happen.

Dr. Charles Tator, the founder of ThinkFirst Canada and Canada's leading expert in the field, sees that the public perception has changed dramatically but feels the critical leagues, both amateur and professional, "are lagging behind.

"The leagues have more that they could do, but they have chosen not to do," Dr. Tator says. "Some leagues are doing more than others. Governments and ministries have also moved – but not far enough."

Ken Dryden, the Hall-of-Fame hockey goaltender whose writing on head injuries has been pivotal to the debate, admires the work of Echlin and Upshur but is not sure if this is the way to go.

"What is clear," says Dryden, "is that the NFL, NCAA, FIFA, like the NHL, are not going to go this far. So go where they may be willing to go – and push them always to go a little further."

Both Dryden and Tator say the research must continue, but at the same time change can be made. Sport knows that a blow to the head is not a good thing by any measure, whether players or financial health, and that frequent, hard blows are clearly a danger.

"In concept," Dryden says, "you can't play football, soccer and hockey without these blows. But if you get some practice at playing this way, it might be more possible than one thinks.

"It has to be demonstrated that these games can be played a different way or these studies can keep on coming and nothing will change because owners, coaches and players don't want to put their leagues at risk."

And so it keeps coming back to the opening question:

Now that we know what it is, what do we do about it?

NCAA teams test a new football helmet in a quest to prevent concussions
May 12, 2018 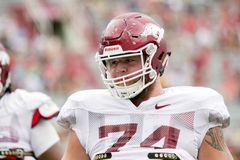 new
Protocols for concussions advised for amateur sports
May 12, 2018

Concussion sensor gets a cool reception from sports helmet firms
May 12, 2018