Earlier this month, Barack Obama unveiled a grand, new U.S. government initiative called BRAIN (Brain Research through Advancing Innovative Neurotechnologies) that he said would provide "a dynamic picture of the brain in action" and help humanity "better understand how we think and how we learn and how we remember."

The brain-mapping effort is set to cost $100-million in 2014, and hundreds of millions more in the years to come. This follows last year's move in Ottawa to create a Canada Brain Research Fund with up to $100-million in matching funds to the Brain Canada Foundation.

For Mr. Obama, it may be a way to put a triumphant stamp on the presidential legacy, but to those familiar with the field, the new program is a question mark.

Mr. Obama compared BRAIN to the Human Genome Project for its potential return on investment. The comparison is also apt on another level: Like genetics in the past decade, neuroscience seems to have reached a peak in the public consciousness.

And that's big business not just for science, but for the media and publishing industries. Peruse bestseller lists during the past few years and you'll find a host of titles in neuroscience and cognitive or social psychology, from Thinking, Fast and Slow and The Brain That Changes Itself to Proof of Heaven: A Neurosurgeon's Journey Into the Afterlife and How to Create a Mind: The Secret of Human Thought Revealed.

The well of material is virtually endless – after all, every aspect of the human experience can be tied, somehow, to the brain. As a result, the hype can be bottomless too. Lately a wave of "neuroskeptics" have been calling for more sober second thought.

One cautionary tale is Jonah Lehrer, author of the bestsellers Imagine and How We Decide. Even before his plagiarism scandal last year, Mr. Lehrer embodied many problems with popular thinking on neuroscience. His pat explanations of the brain's complexities, his skill for extracting grand truths from limited data and his knack for drawing unlikely connections all made him a hit. They also led to his downfall.

Even prestigious publications can be guilty of similar sloppiness. Around Valentine's Day, The Wall Street Journal ran a story called "How Neuroscience Can Help Us Find True Love" that breathlessly proclaimed, "When you see a 'special someone,' it's neurons gone wild!" These wild neurons transmit messages across synapses that "neurologists call 'action potential' – and what we call 'Wow!' "

"Science journalism is going through a bit of a crisis right now in terms of getting the proper message across," says Noah Gray, a senior editor at the journal Nature who specializes in neuroscience. "Part of this is due to the accelerated news cycle and the extreme pressure to be first. But it also stems from the fact that complex scientific findings often demand critique from a seasoned, experienced individual familiar with the history and present of that particular field."

Too often, journalists do not bother to seek out those individuals. But into that void have emerged several smart blogs – often written anonymously by scientists – such as The Neurocritic, Neuroskeptic and Mind Hacks, specializing in criticizing pseudo-neuroscience.

When the U.K. tabloid The Daily Mail claimed that a neurologist had discovered a "dark patch" in the "central lobe" of killers and rapists, where "evil lurks," the sites had a field day. For one thing, the brain doesn't have a central lobe.

"These evildoers have grown another lobe!" joked Vaughan Bell, a clinical psychologist in the U.K. who writes for Mind Hacks.

But many media outlets more respectable than tabloids have been found to misrepresent research routinely. Almost 3,000 articles on neuroscience were analyzed in a recent British study, and a large number of them distorted or inflated the scientific findings they were reporting.

The search for 'sexy'

Scientific results don't just get overhyped by the press, however. Sometimes the journals themselves are to blame. "Scientific journals prefer to publish results that are positive and 'sexy,' just like other media," points out the Neuroskeptic blogger. "This along with other pressures distorts science."

Scientists can also be the culprits, overstating the importance of results to win funding in an increasingly cutthroat profession. In a few recent high-profile cases, that's led to outright fakery.

Last year, the social psychologist Lawrence Sanna stepped down from the University of Michigan after several of his research papers were retracted for having data that was a little too perfect.

In one study, Prof. Sanna claimed that people behaved more altruistically if they rose up vertically. His data seemed to show that mall shoppers who had recently gone up an escalator were more likely to contribute to charity than a shopper who had ridden down.

One widely used experimental concept that's come in for criticism is the "goal-priming effect," the idea that people adjust their behaviour when they are first "primed" in certain ways. A famous case recounted by Malcolm Gladwell in his bestseller, Blink – that people walk slower if they are primed with words associated with being old – has proved impossible for other scientists to replicate.

Last year, a group of researchers began the Reproducibility Project, a collaborative attempt to replicate dubious or head-scratching results.

New York University psychology professor Gary Marcus, writing for The New Yorker, placed some blame on the vogue for functional magnetic-resonance imaging studies, or fMRI, in which parts of the brain seem to "light up" as a result of certain behaviour.

The results can be seductively easy to misinterpret. In one demonstration, a group of American post-doctoral psychology students led by Abigail Baird and Craig Bennett put a frozen, dead salmon in an fMRI machine: The data seemed to reveal that the dead fish was thinking. Of course, this was hogwash, or at least fishwrap. What it really showed was that the colourful images from fMRI studies show only probabilities, with lots of false positives.

"I'm so tired about hearing about 'the brain lighting up'," Mr. Bennett told BoingBoing.net. "It makes it sound like you see lights in the head or something. That's not how the brain works."

Pretty fMRI pictures seem to imply the part that "lights up" is solely responsible for the behaviour being tested. In reality the brain is a much more intricate orchestration of parts working in concert – "different pieces of tissue working together," Prof. Marcus wrote. "Saying that emotion is in the amygdala, or that decision-making is in the prefrontal cortex, is at best a shorthand, and a misleading one at that."

One deeper problem for the average reader or journalist is that the public is discouraged from reading most original research papers by steep paywalls.

"Media literacy in science journalism," says Parker Higgins of the Electronic Frontier Foundation, "is really stunted by the fact that we don't have access to the primary sources."

Even the British media study – with its reader-friendly revelations about the popular press – is hidden. To see the full text, published in the journal Neuron, you'd have to pay $31.50.

"You can't expect the public to have a good understanding when they don't have access to the thing they're supposed to understand," says Mr. Higgins.

This is the issue that moved information activist Aaron Swartz to download millions of scholarly-journal articles surreptitiously, for which he faced charges when he died by suicide in January.

If we could look at the studies, however, could we read them competently? Modern neuroscience is still an emerging field; it began in the 20th century, and isn't taught in every high school like physics or chemistry. Although it's becoming a more popular university option, few journalists have neuroscience backgrounds, even among the few who have science degrees.

Of course, you don't need a degree in a subject to write an accurate article. But consider, too, the financial crisis in print media, in which many journalists and editors find themselves fielding multiple areas at short-staffed publications.

This does not excuse the numerous errors Mr. Lehrer, for example, made on his popular Wired.com blog Frontal Cortex. But it's true that his posts (unlike his articles in print) were not fact-checked, and his editors turned a blind eye.

How can readers learn to be more skeptical? "Certainly," says Nature's Mr. Gray, "I would strongly recommend to anyone interested in learning more about neuroscience that they read the blogs of the Neurocritic, Neuroskeptic and Mind Hacks. … Those are actual practicing neuroscientists who are experts in their respective fields."

Meanwhile, no matter how many millions governments throw at them, it's important to keep in view that knowledge about the brain is in infancy. On NPR after Mr. Obama's BRAIN announcement, Francis S. Collins, the head of the U.S. National Institutes of Health, mentioned "very beautiful videos" that had just been released in a study that imaged 80 per cent of the neurons of a zebra fish larva. "We don't quite know what the fish is doing," he added, "but it's beautiful to look at."

At least it was a live fish this time. But it's a long way from a map of the human mind.

Geeta Dayal is a culture and technology writer based in San Francisco. She has a degree in brain and cognitive science from the Massachusetts Institute of Technology.

Editor's note: An earlier version of this article incorrectly described a British study on neuroscience articles. The study found that the media often extrapolated neuroscientific findings beyond what was originally reported, but the study made no attempt to quantify the percentage of media coverage that did so. The article incorrectly said roughly two-thirds of the articles were distorted.

Opinion
Put your money where your brain is, Canada
April 12, 2013 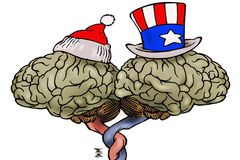 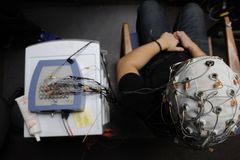