There's a good chance that someone in your bed snores. And if your nights are continually disrupted by the sound of buzz-sawing, you're probably desperate for a remedy.

Forty years ago, snoring was considered little more than an annoyance, something you might have teased your Uncle Al about for keeping the neighbourhood awake all night.

But, in recent years, research has shed light on the harmful health effects of snoring and its more extreme form, obstructive sleep apnea, which can include a heightened risk of cardiovascular disease and mortality.

And with rates of snoring believed to be on the rise, partly because of an aging and increasingly overweight population, snorers (and their bedmates) are increasingly in search of solutions.

"People are becoming more aware of snoring because their spouses are less likely to put up with it, now that they know there might be some kind of treatment," says Douglas Bradley, a Toronto respirologist.

Bradley notes that an estimated 45 per cent of men and 28 per cent of women 30 to 60 years old habitually snore.

The prevalence increases with age, he says, as more than 50 per cent of men and around 40 per cent of women among those aged 50-plus snore.

But easy fixes are hard to come by. The global market for surgery and anti-snoring devices, which range from mouthpieces to chinstraps to specially designed pillows, is expected to reach $1.8-billion (U.S.) by 2024, according to the U.S. market research firm Grand View Research Inc.

But, as the firm cautioned in a news release in August, market growth will likely be hindered by factors such as the prohibitive cost of the products and their limited efficacy.

The search for better treatments is impeded by the fact that how and why people develop snoring is still a mystery.

The mechanics of snoring are pretty straightforward: It occurs when there is a narrowing of the airway that creates turbulent airflow, which produces vibration of the soft tissues at the back of the throat, Bradley explains. In obstructive sleep apnea, which he says affects about one in five habitual snorers, the airway becomes blocked altogether.

But why this happens is complex and not well understood. Scientists are only beginning to learn about the pathogenesis of snoring. While some indicate that genetics may be involved, others hypothesize that our dietary inclination for easy-to-swallow foods may be to blame and still others suggest that our sedentary lifestyle is likely a contributing factor.

In some individuals, the bone structure of the chin and jaw may cause the tongue to thrust backward into the throat, says Dr. Geraldo Lorenzi-Filho, a researcher and associate professor of pulmonology at the University of Sao Paulo in Brazil. And in people who are obese, the accumulation of fat in the pharynx area may contribute to snoring.

But Lorenzi-Filho also raises another hypothesis that may help to explain why snoring has become such a common problem.

"In our modern society, we don't bite a lot of food," he says. At least, not compared with our earlier ancestors, who gnawed on roots, fruits, leaves and unprocessed meats. The lack of effort needed to chew and swallow our daily meals may leave our throat and tongue muscles underused, he suggests.

Whatever the underlying reason, some sleep experts suggest that there is a promising remedy for snoring (beyond the conventional recommendations to avoid alcohol, sleep on your side and lose weight) that costs nothing: exercise – and not in the way you may expect.

Lorenzi-Filho has been studying the effects of oropharyngeal, or mouth and throat, exercises on snoring and moderate sleep apnea. These exercises, which include sliding the tongue back along the roof of the mouth or lifting the soft palate and uvula while saying "Ahh," were originally developed for speech therapy, he says.

In a 2015 study published in the American College of Chest Physicians journal CHEST, Lorenzi-Filho and his colleagues found that participants who performed eight minutes of these exercises three times a day for three months experienced a 36-per-cent decrease in the frequency of their snoring and a nearly 60-per-cent drop in the power of their snoring.

Granted, the study size was small; it evaluated only 39 patients. But the case for strengthening snorers' oropharyngeal muscles has also been supported by researchers in Switzerland. In a 2006 article in the BMJ, the Swiss researchers said that playing the didgeridoo, a long cylindrical wind instrument, was effective as an alternative to the primary treatment for obstructive sleep apnea: continuous positive airway pressure, or CPAP, machines, which are used during sleep and many find uncomfortable.

Lorenzi-Filho believes that the exercises work by strengthening the dilator muscles in the throat, which are the ones that contract when you swallow to push food down, as well as the tongue, soft palate and chin muscles. He acknowledges that it's unclear why these muscles would require strength-training in individuals who snore, but similar to other muscles in the body, it is believed that they weaken with age.

Bradley, director of the sleep research laboratory of the Toronto Rehabilitation Institute and Toronto General Hospital, believes that our sedentary lifestyles may also be causing more of us to snore. Instead of zeroing in on the throat muscles, he has been looking at the effects of exercising a different body part: the legs.

Walking squeezes blood out of your legs up into the heart, he says. But when you spend long hours sitting, gravity causes you to collect fluid in the legs, which you may not even notice, says Bradley, who is also co-founder and medical director of BresoTec Inc., which makes home sleep apnea tests.

When you lie down at night, gravity moves that built-up fluid toward the head, he explains. "Unfortunately, it goes into the lungs and into the neck," he says, which can cause the narrowing of the throat that leads to snoring.

In a new study yet to be published, Bradley and his colleagues asked participants to sit for four hours, with some using foot pedals under their desks like on a bass drum to activate their calf muscles. The researchers found that using the foot pedals prevented fluid buildup in legs. And participants who had pre-existing narrow throats had a reduction in their snoring, compared with those who did not use the foot pedals.

Bradley is skeptical of some of the anti-snoring devices on the market, such as nasal strips – "people buy them, but I don't know why." And he says certain oral appliances that are custom-made by dentists may work, but not for everyone and they tend to be expensive. Surgery known as uvulopalatopharyngoplasty, which removes tissue with a scalpel, laser or cryotherapy, is often initially effective, but in many people, snoring eventually returns at a different frequency or with different characteristics, he says.

A big hurdle to finding an effective remedy is that snoring is "in the ear of the beholder," typically reported only by a bedmate, Bradley says, which makes it difficult to accurately measure.

Yet, he notes, "As people become more sensitive to this, I think it's going to be more important that we get objective measures so that the treatment of the condition is objectively verified. And that's really not going on right now." After all, he says, if you plan to spend hundreds or thousands of dollars on a solution, "you ought to be fairly sure that the thing's working."

Is snoring hereditary? Research by Dr. Maninder Kalra, medical director for the sleep centre at Dayton Children's Hospital in Ohio, suggests it may well be.

In a 2006 study published in the journal CHEST, Kalra and his colleagues found 12-month-old babies were more likely to snore if they had atopy, or a genetic tendency to develop allergies, if they were African-American, or if they had a parent who snored.

But children who snore don't necessarily become snoring adults. Kalra says an estimated 10 per cent of children snore, though the prevalence varies depending on their age. Snoring is more common in children between the ages of 2 and 6, when the size of their tonsils enlarge rapidly, he says. The tonsils and adenoids, whose function is to help fight the frequent infections that kids are exposed to, then tend to shrink around the age of 6, which typically results in less snoring.

Kalra recommends children should be checked by a doctor if they snore loudly and frequently – three or more times a week – and if it seems they stop breathing intermittently while sleeping. If large tonsils and adenoids are the cause, they can be removed by surgery, Kalra says.

Turns out sleeping can help you shed those extra pounds
August 15, 2016 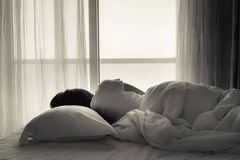