The Liberals have promised things will be different now that they are in power. Aside from high-profile initiatives, such as helping tens of thousands of Syrian refugees enter the country and pushing forward with the legalization of marijuana, several of the "real changes" Prime Minister Justin Trudeau is promising involve Big Food – and would upset quite a few industry players along the way.

This represents a significant departure from the near-decade-long tenure of Stephen Harper's Conservatives, whose underlying mantra when it came to consumer health policy appeared to be "Let the industry figure it out."

Case in point: The Tory government disbanded a sodium-reduction task force it had created after the group made several strong recommendations calling on food manufacturers to lower salt levels. The task force was replaced with a group influenced by the food industry. While one of the government's stated priorities was to lower the excessively high levels of sodium Canadians consume (largely as a result of salt added to products), Health Canada did not survey companies to see if they were living up to the goal and no progress reports were made public.

Health Minister Jane Philpott declined an interview request or to provide more detail on policy decisions or when they might be made. The question now is whether the government will follow through on its proposed consumer health agenda – and whether it is willing to go further and make some badly needed decisions on pressing files.

Canada still doesn't have a ban on trans fats, despite rock-solid evidence that they are dangerous to heart health. The United States has moved ahead with plans to eliminate them, something the Conservative federal government promised it would do here as early as 2009. The Liberal platform promises to bring in regulations similar to what the United States has in place. The decision is a no-brainer, and the government should move quickly on it.

Another welcome campaign pledge was to add new national restrictions on marketing of unhealthy food and beverages to children, modelled after rules already in place in Quebec. That province adopted legislation in 1980 banning advertisements aimed at children under 13. A 2011 study by researchers at the University of British Columbia found that children in Quebec consumed less fast food than their counterparts in other provinces, where the ban isn't in effect. While many food industry companies have signed on to voluntary guidelines to limit advertising to children in the rest of Canada, a study published last year in the journal Obesity found that, over all, some major food companies are targeting children and adolescents in advertisements for unhealthy food more than they were seven years ago. Many health experts have long called for stronger restrictions on advertising to young people to help combat rising rates of obesity and Type 2 diabetes. If Ottawa were to follow Quebec's lead, it would be an impressive feat. Simply adopting a version of the industry's own self-imposed guidelines would not.

Sugar has been a hot-button issue in the past few years, particularly following the publication of a study that found people who consume even moderate amounts of sugar have an increased risk of heart disease. Then, last March, the World Health Organization adopted guidelines declaring that people should limit their consumption of free sugars – those added to food or drinks as well as those naturally found in fruit juices, syrups, concentrates and honey – to no more than 5 per cent of daily calories. In response to mounting pressure, the Conservative government said it would overhaul nutrition labels. But what it ended up proposing was a nutrition facts panel that wouldn't differentiate between naturally occurring or added sugars and would, in effect, make sugary items, such as soda pop, seem healthier than they are.

To arm Canadians with the information they need to understand the amount of free sugars in their diet – and how to limit them – the government needs a much better plan. A starting point would be to create a nutrition facts panel that uses the WHO policy of limiting free sugars to

5 per cent of daily calories as a guide.

The science around the dangers isn't as clear-cut. Some studies suggest food dyes may be linked to everything from attention-deficit hyperactivity disorder to allergies to cancer, while others suggest the risks are minimal. Still, many companies have been voluntarily pulling artificial dyes from their products in response to public pressure, such as Kraft's decision to replace the artificial colour tartrazine in its Kraft Dinner with natural ingredients. If you are concerned enough that you want to avoid certain food dyes, good luck. While there have been discussions to require food makers to spell out which artificial colours are in their products, no rules are in place. The Trudeau government could start there. But why not commission some high-quality studies while they're at it, to better understand the potential risks of these dyes?

The Liberal platform promises to "reduce salt in processed foods." What that means in practice is anybody's guess. As noted above, the Conservatives decided to let the food industry drive the bus on salt, with a goal of reducing average sodium intake for adults 14 and older in Canada to 2,300 milligrams a day (it is now around 3,400 milligrams, which far exceeds the safe upper limit). Although several conflicting studies have disputed the health effects of a high sodium diet in recent years, most experts agree that too much sodium can lead to high blood pressure – a risk factor for cardiovascular disease – as well as other problems, including kidney stones, stomach cancer and thinning bones.

Under the previous government, food companies pledged they were committed to reducing levels, but slowly, over time, so as to avoid mass consumer rejection of soup and pasta sauce that don't contain half a day's recommended sodium intake. If the Liberal government decides to follow suit and adopt a voluntary industry-led approach, it seems unlikely much will change. What is needed is a strong system that holds industry accountable through surveillance and published reports, as well as educational campaigns to make more consumers aware of the problem of excessive sodium and how to avoid it. Britain adopted that type of comprehensive program in the early 2000s and was beginning to make significant progress until a change in government stalled progress.

There are plenty of other consumer health issues the Health Minister ought to act on, including regulation of e-cigarettes and following the lead of several provinces by banning menthol in tobacco products. Are she and the rest of the Liberal government prepared to stand up to the interests of the industries involved? 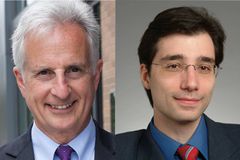