Canada's top health officials say the risk that Ebola will reach this country remains "very low," despite the killer disease arriving in the United States carried by a traveller who flew from Liberia, the West African country hit hardest by the outbreak.

But if Ebola does find its way to Canada, the country's airports, hospitals and public-health laboratories are prepared to contain the lethal virus, Gregory Taylor, Canada's chief public health officer, said Wednesday.

More than 3,000 people, including hundreds of health-care workers, are known to have died from Ebola already in West Africa's current outbreak.

"Canada is well-prepared with a number of systems in place to identify and prevent the spread of serious infectious diseases like Ebola," Dr. Taylor said at a news conference with federal Health Minister Rona Ambrose in Banff, Alta.

There are no direct flights to Canada from Sierra Leone, Guinea and Liberia, the three African countries hit hardest by the epidemic, Dr. Taylor said.

Still, the Canada Border Services Agency has stepped up its Ebola screening procedures at airports, including programming an automatic reminder on all CBSA officers' computers screen to ask travellers from Ebola-affected countries if they feel sick. If the answer is yes, travellers will be sent immediately to a quarantine officer for a full assessment.

"That's new," Dr. Taylor said. "That's very specific in terms of trying to detect anybody coming from the area who could possibly be ill at the time."

Canada is holding in reserve some vials of the vaccine it has offered to the World Health Organization in case front-line health workers in Canada need it, Dr. Taylor said.

Four provincial laboratories will soon be capable of performing preliminary Ebola diagnostic tests; Quebec's lab already has that capability, as does the National Microbiology Laboratory in Winnipeg.

The Public Health Agency of Canada has sent guidelines to hospitals warning them to be on the lookout for patients who have travelled to Africa and are displaying the symptoms of Ebola, which include fever, vomiting and diarrhea.

Dr. Taylor said that, so far, about 20 suspect patients have been identified and isolated at hospitals across the country. All tested negative. "This is good," he said. "This is a high index of suspicion. People are thinking about this."

A U.S. man, confirmed the first case of the viral hemorhaggic fever diagnosed outside Africa, is now isolated and deathly ill in a Dallas hospital. He felt sick six days after landing in Texas on Sept. 20, where there is a large Liberian expatriate community. He sought medical treatment but was inexplicably sent home despite telling emergency room staff he was visiting Liberia.

Mai Wureh identified herself as the sister of the Ebola victim, naming him as Thomas Eric Duncan, and said he was given antibiotics and told to go home. When he returned two days later, even sicker, he was admitted to Texas Health Presbyterian Hospital.

Others who came in close contact with the Ebola carrier are at risk, said Thomas Frieden, director of the U.S. Centers for Disease Control and Prevention. "It is certainly possible someone who had contact with this individual could develop Ebola in the coming weeks," he said.

Texas health officials said 12 to 18 people who had been in contact with the patient were being monitored. They also said health workers who took care of the patient have so far tested negative for the virus and there are no other suspected cases in the state.

LIBERIA: U.S. CASE MEANS 'THE ENTIRE WORLD IS NOT SAFE'

In Liberia, where an impoverished nation is struggling to cope, an Ebola victim in the United States raised hope that the world will be prodded into greater action.

"It means the entire world is not safe," Tolbert Nyenswah, Liberia's assistant health minister, said in an interview. "It means we should all be making frantic efforts to stop Ebola in West Africa. Disease has no borders."

Mr. Nyenswah said of the man stricken in Texas: "My heart goes out to him," adding the that the disease's spread beyond Africa was "inevitable." The man had no symptoms on departure, so screening at the airport would find nothing amiss.

NORTH AMERICA: 'WE WILL STOP THIS IN ITS TRACKS'

Fears of a widespread outbreak in North America are groundless, U.S. officials said.

"We will stop this in its tracks in the United States," Dr. Frieden said.

Still, the announcement of the first case in North America barely a week after the CDC warned that Ebola could strike 1.4 million people – and kill more than half of them by January in a worst-case scenario – sent shock waves across the United States.

Mr. Obama, who has ordered 3,000 troops to West Africa to build and secure isolation clinics, called last week for other nations to help battle the Ebola outbreak. 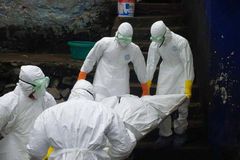 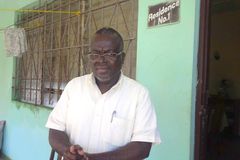 How a cold call led to a Canadian experimental Ebola treatment
September 29, 2014 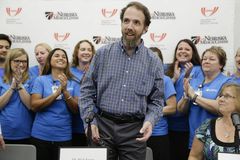 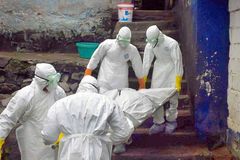 Follow Kelly Grant, Paul Koring and Geoffrey York on Twitter @kellygrant1 @PaulKoring @geoffreyyork
Report an error Editorial code of conduct
Due to technical reasons, we have temporarily removed commenting from our articles. We hope to have this fixed soon. Thank you for your patience. If you are looking to give feedback on our new site, please send it along to feedback@globeandmail.com. If you want to write a letter to the editor, please forward to letters@globeandmail.com.
Comments