If your child is carrying excess weight, it's natural to be concerned for his or her health and happiness or worry about bullying at school.

Deciding how to address a child's weight problem, though, deserves careful consideration. How you tackle the issue can have harmful and lifelong consequences.

Several studies have found that encouraging children and adolescents to diet in order to lose weight is associated with unhealthy weight-control behaviours, lower self-esteem and poor body image. Until recently, it's been unclear whether these unhealthy effects last into adulthood.

According to a study published this month in the journal Pediatrics, they do. But that's not all. The results revealed that the practice of encouraging kids to diet is passed on to future generations.

For the study, researchers from the University of Minnesota in Minneapolis followed 556 adolescents for 15 years into adulthood. Surveys were completed at high school in 1998-99 and again online in 2015-16 as young adults.

Like previous findings, participants whose parents encouraged them to diet were more likely to practice unhealthy weight-control behaviours, binge eat and report more depressive symptoms, body dissatisfaction and lower self-esteem when they were teenagers than participants who didn't experience parental encouragement to diet.

The researchers found that many of these weight-related and emotional effects tracked into adulthood. Participants who were told they should go on a diet to lose weight during adolescence had a higher risk of dieting, binge eating, being overweight and reported low body satisfaction 15 years later as adults.

One limitation of this study is that it relied on self-reported weight and height information to calculate participants' body mass index. It's possible that some participants inaccurately reported these measurements.

Even so, the study strongly suggests that encouraging kids to diet to lose weight not only has negative physical and emotional effects, it can also shape a person's values, beliefs and weight-control practices which they pass on to their own families.

Adults who have grown up hearing comments about their weight and being told they should diet may think that these are normal conversations and ones they should engage in with their own children.

If you're concerned your child is overweight, keep in mind that it's not always easy to recognize a weight problem. Kids grow at different rates and changes in body fat differ among girls and boys. Ask your pediatrician to review your child's growth charts with you.

The following tips can help parents foster healthy habits in children in a positive and supportive way:

Talk to your child about healthy eating and physical activity instead of body weight. Don't talk about calories, a number on the bathroom scale or the evils of junk food.

Make conversations around food about energy for sports, fuel for learning, healthy skin and so on. Ensure both parents are on the same page so mixed messages aren't sent.

Stock your kitchen with nutritious foods such as fresh fruit, cut-up raw vegetables, yogurt, cheese, trail mix, hummus, guacamole and whole-grain crackers. Keep healthy snacks front and centre so kids will be more likely to reach for them.

Limit the amount of time your child spends in front of the television, computer or tablet. Suggests ways that you can be physically active together.

Make it a family affair

Don't single out an overweight child; use the same healthy eating approach for the whole family. Involve kids in planning, shopping, preparing and cooking healthy meals.

As often as possible, eat together as a family without distractions (e.g., no TV, tablets, cellphones). Studies have found that kids who regularly eat family dinners also eat more fruit and vegetables and are less likely to be obese.

Consider your own eating and exercise habits to see if you're setting a good example. Research suggests that positive role modelling is a better way to improve a child's diet than trying to control his or her food intake.

Avoid complaining about your own weight (or anyone else's) or talking about wanting to lose weight in front of your children.

If your child has opened up about their weight concerns with you and has expressed an interest to get healthier, consult a registered dietitian who is trained to develop a nutritionally balanced meal plan for growing children and adolescents. 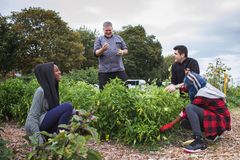