The alarm went off on her mother's bedroom door, and Thuy Nguyen-Crawford got up, as she often does many times in a night, to see what was wrong. Her mom regularly mixes up the clock - thinking it's morning, when it's really midnight, not registering the darkness outside her window. Sometimes, she doesn't make it to the bathroom, and Thuy, already exhausted, has to change the sheets, just as she's done for her three young children.

Her mother often hallucinates during those early morning wake-ups, imagining the cat trapped outside or her daughter sitting at the end of her bed. On this summer night, Tuyet Nguyen was convinced that she saw Thuy's father climbing the lamp post in the driveway. Her daughter coaxed her back to bed. "That's okay, mom," she said. "I'll go and get him down."

The next morning, she remembered enough to ask: Was he okay?

Thuy's explanation satisfied her: "Dad was fine. I told him not to do it again."

Caring for her mother part-time is a struggle itself, but a diagnosis of dementia has also caused tension in her family over how to provide care, and what should happen in the future. Thuy shares the duty right now with her father, who at 82 watches her mother and handles her hygiene for long spells on his own.

Her parents have an apartment in her brother's house, but she worries that something will happen while everyone is at work. Her father has refused outside help - in Vietnamese culture, families handle the job alone. But he has his own health problems; two years ago, he passed out at home from a bleeding ulcer and her mom was able to call Thuy for help. "Now she can't even dial the phone. If that happened today, he would bleed to death."

Thuy knows that, at some point, a nursing home will have to be a consideration but it's not a subject easily raised with her siblings. In Vietnam, she says, "if you send your parents to a nursing home, you are sending them to die."

At the same time, she knows that sitting home watching television all day is not healthy for someone with vascular dementia, who needs mental stimulation - which is why she makes her mom chop the carrots for dinner and takes her to her grandsons' soccer games and swimming lessons.

Tuyet Nguyen was diagnosed with dementia after suffering her first major stroke in November, 2008, while watching an episode of Survivor with her grandchildren. Thuy was in the kitchen preparing a bottle for then 1-year-old Lauryn, when she glanced over, and saw her mother staring oddly into space. She didn't answer when her name was called, and even when she appeared to become aware of her surroundings, her words were slurred and her hands shook. Her son-in-law, Darren Crawford, called the ambulance, and Thuy slept by her beside in the hospital for two days, to make sure she was safe and to translate when the doctors ran tests.

It was a frightening time for Thuy, the youngest of five siblings in a family that had arrived from Vietnam as part of the "boat people" influx in the winter of 1980. She was extremely close to her mom, who often stayed with her family in Burlington, Ont., helping with her grandchildren.

When she watched her mother her mom struggle to draw a house during the memory tests, she was shocked: "This is a woman who could knit without a pattern." In the hospital, Thuy learned that her mother had suffered smaller strokes unnoticed - the cause of the minor memory issues they had noticed. This stroke had done major damage: She could no longer dress herself and obsessively pulled at her hair, leaving bald spots on her scalp.

Slowly, Mrs. Nguyen relearned how to do simple tasks - to lift a spoon to eat, or soap her hands. But she developed odd habits too - picking lint off the carpet floor, or spitting into a Kleenex over and over at dinner. She craved sweets, and suddenly disliked Vietnamese soup, a dish she had once masterfully prepared. Even now, she forgets to eat unless coaxed by Thuy, who now serves her eight small meals a day to make sure she gets enough food.

Sometimes, she uncharacteristically snapped at her grandchildren. "You're such a bad girl," she might say to Lauryn, now 3. "I don't like you." And Thuy would have to explain that "Ba" was sick, and didn't know mean it. She assigned each of her children a specific job: Lauryn would help Ba with her shoes and find her slipper; Tyler, 6, will lead her to the table for dinner and pull out her chair; Tristan, 9, is responsible for opening her bottle of Ensure, a dietary supplement.

Thuy misses many parts of their relationship - she feels a pang when she asks her mom to wash the lettuce for dinner, knowing she'll never get her advice again on how to cook a family favourite. When they are home alone, though, Mrs. Nguyen rarely leaves her daughter's side. (Darren and Ida Vitor, the family's nanny, also help, but Mrs. Nguyen regularly insists on Thuy's assistance.) "If anything, it's brought us much closer," says Thuy. "If I am not around, she's always looking for me."

But dementia is an unpredictable disease, and in August, while grocery shopping with her family, Thuy noticed a strange hesitation in her mother's step, as though she were confused by the entrance to the store. At the meat counter, Mrs. Nguyen froze, her hand bent in a strange position. Thuy and Darren rushed her to the hospital and, as the nurse was interviewing her, she had a major seizure.

Thuy and her father have returned to splitting the primary care, but her mother's disease appears to have advanced. She is more confused, waking up at night more often, and has become incontinent. Eating is a time-consuming struggle.

A tough conversation about the future lies ahead, but for now, Thuy says, "I am just going to try to keep my mom as active as possible and hope for the best."

Scotland's secret: 'Terrorist' tactics in the war for better dementia care
September 23, 2010
'Families take care of their own'
September 22, 2010 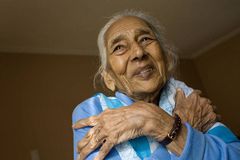