It is Thanksgiving. And I would like to take a moment to give thanks to someone I did not know and will never meet.

This person passed away, I believe, the day before Thanksgiving, 2005. I am not sure how he or she died but, while alive, this person made a commitment that his or her organs should be available for donation.

I am not the recipient of one of those organs, but a resulting transplant that occurred on Oct. 9, 2005, a Thanksgiving Sunday, has had a profound impact on my life.

My "little buddy" Kaila (I also liked to call her "Champ," though she commented, "It sounds like a boy's nickname") was one month into Grade 9 that Thanksgiving weekend. At 4-foot-10 and 95 pounds, Kaila, despite her shyness, was a powerful and confident presence, projected through the happiest and brightest pair of eyes. And, at 14, she was the recipient of that transplant, a heart.

I had met Kaila that September - her mother and I had friends in common. At that time, because of a diminished heart capacity resulting from the chemotherapy she had endured while battling cancer at the age of 2, she had difficulty climbing the six steps that led to her front door. I did not witness the precise moment of her return from the Hospital for Sick Children in Toronto, but I know she bounded up those stairs. And in January, 2006, Kaila returned to her class and ended the year with straight As.

In the years that followed, I became Kaila's chauffeur when her mom was not available. I picked her up at school and, after sometimes checking the glove compartment for surprises, my little buddy would tell me what she had learned that day. When I took her to and from work, we compared notes on our respective bosses. I occasionally brought her to her numerous medical appointments, but more often I picked her up from them and we almost always included a stop for tea. I provided transportation to friends' houses to do homework or, as Kaila got older, to party.

There always seemed to be a new friend in a different part of town. I had trouble keeping track. I remember once, while driving Kaila to a new friend's house, I asked, "Who is this person?"

"They're my best friend," Kaila responded.

"But what about the best friend from last week?"

There must have been several hundred drives. Every one ended with my little buddy saying, with a hint of a giggle, "Thank you, Steve."

The driving, I am thrilled to say, was later reciprocated. Kaila, who wanted very much to get her licence, drove me to a number of places, beginning with the final 300 metres to her house. That was an evening shortly before Kaila went to Bangkok to compete in and win a cycling gold at the World Transplant Games.

We had put air in her bike tires at the gas station and were driving home when I pretended to be too tired to continue driving. I pulled to the side of the road and began to ask whether she would be willing to take over. I got as far as, "Do you think …" before she started to climb into the driver's seat.

We adjusted everything and took off, rather, inched our way down the road to the turn for her street. We eventually got through the turn, then, Kaila realized she would have to turn again. This time, into her driveway. "Oh no," she said in a panic, "where else can I park?"

I wanted to say the driveway, as much to see whether or not we would end up on the lawn, but instead said, "You can park at the side of the road, Champ."

Kaila brought the car to a stop, jumped out and quickly disappeared into her house. The car was in the middle of the road. After I reparked and brought her bike into the backyard shed, I found Kaila on the phone telling one of her many best friends all about her driving experience.

Sadly, there are no more drives. On Feb. 28, five weeks after celebrating her 19th birthday with more new best friends made in her first year at McGill University, Kaila passed away. She donated her eyes for transplant.

Had Kaila not received her new heart in October, 2005, none of these few of many memories - simple and routine as they are - could have happened. That is the beauty of these memories: their simplicity.

A few days before she died, Kaila, an only child, said to me as I was helping her with something at the hospital, "Steve, you are like my big brother. Together we make a pretty good team."

It was a moment of clarity. And I finally told her why I called her Champ. It is a name one of my brothers calls me, I explained, and I felt that she was my little sister.

We never spoke much about all the health stuff she had endured through her life. We never really needed to, but I often wondered what stories Kaila would tell. I did ask her once what she thought of her heart transplant and she replied, "It was a miracle." Yes it was.

In August, 2007, I signed my organ donor card with Kaila as my witness. On March 4, at her funeral, I got to say thank you to my little buddy for the lift she had given me and for being an inspirational figure in my life. Now, I would like to say to whomever it was who during life decided in the event of death his or her organs could be used by others, thank you. 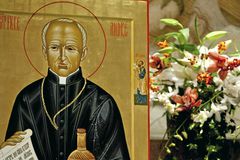