I first donned running shoes 10 winters ago, after my brother and I chanced upon a running guide while wandering through a bookstore. My brother breathed in; his expanding waistline obligingly retracted. I ran my index finger over the sags under my chin. We bought two copies of the book.

My brother went on to run two marathons before I had finished Chapter 5. While he was testing the limits of his body and mind, I was cajoling my running partners into short jaunts along the Toronto shoreline that ended in long, fattening meals at local restaurants.

Then, at 32 and at the end of a significant relationship, I decided to leave my teaching job, pack my runners and head for Namibia. It was there that I finally made peace with my running shoes and my life.

Namibia had long been a country divided. Almost 100 years of enforced segregation, ethnic separation and economic disparity had left its mark. Vast commercial farms owned and operated by a white minority cover the southern 90 per cent of the country. The less fertile land to the north remains the home of the black majority. By the 1960s, this division was manifest in a literal line in the sand. Guarded by the military, the Red Line is a residual reminder of the great divide between blacks and whites.

I came to live above the Red Line. With the onset of apartheid, the people of Oshikuku, the village in which I lived, were subject to war, restricted movement, banishment from education, beatings and torture.

I spent my time in the village teaching students who perched narrow slabs of wood on their knees as makeshift desks. I would leave them preparing to study into the night by the light of one dangling bulb. Then I would run away the day along a diminutive canal where bits of debris bobbed like unhappy ducks in a polluted pond.

Within weeks, my solo runs disappeared. Without any comment or query, little feet began to lightly pound the sand behind me. As I looped the canal, there they would be: boys and girls aged 6 to 12, running barefoot under a slowly fading African sun. If I ran, they would come.

We didn't talk about life on our runs - we didn't need to. I already knew enough of the stories deep in the hearts of the children surrounding me. Loide's father had seen too much in the war against the South African Defence Force and had taken his life with his own gun after the war ended. Maria's aunt had been held in a dark, snake-filled hole in the earth for a full week by the occupying army. When her family found her, she returned to her village but never spoke again. Angelina ran with a dream dancing in her head: to be white, the only ticket out of poverty that her years had taught her. Many carried stories of mothers who couldn't afford to feed the family, and of a silent killer running through their veins.

Every evening they ran defiantly on the land, feet scraping the earth that concealed an unsolvable riddle of land mines, a constant reminder that even their own soil could betray them. Yet during our sessions, their bodies were light and their goal simple - to run, just run.

The club was always welcoming new runners. We never lost any in return. As our numbers swelled, we began to mark our progress. On a warm night in June, we held our first Oshikuku Running Club party.

On the designated night, a procession of children entered my sandy yard dressed in their Sunday best. The 30 or so kids with invitations were amongst a crowd of double that number, determined to be part of the festivities - runner or not.

For several hours, children bobbed for apples, ate cake and navigated their first game of musical chairs. As the sun was swallowed by the horizon, full and tired children plodded home, limp hands laced within their parents' fingers, most leaving the first official party they had ever attended.

In the two years that we ran, our feet became great instructors. We never crossed any finish lines, but we ran countless laps around the canal. Along the way, this is what I learned: Everything you need to run isn't on you but in you. You don't need a fancy outfit, equipment, even shoes. All you need is your heart, your feet and hope - that if you put one foot in front of the other, that action will move you forward and bring you somewhere new.

It turned out that the finish line isn't as important as I had once thought: Showing up and staying in the race is just about enough. This lesson came from young children who were strong enough to leave behind apartheid, the country's darkest hour, and come through to the other side, still ready to run on.

It has been eight years since I returned to Canada, but every once in a while, a letter arrives from a sandy village in the desert of Namibia to remind me that the Oshikuku Running Club runs on.

I have some small feet to thank for teaching me what running, and life, is really all about. 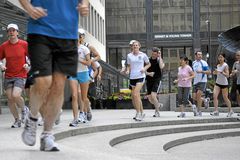