Spend some time at the Ottawa Hospital and it likely won't take long to catch a glimpse of an e-health digital revolution taking shape.

Doctors use iPads for interactive bedside checkups, explaining a diagnosis with digital images of X-Rays, MRIs or other test results. A patient's full medical file can be pulled up on the iPad, as well as pages from reference books and other medical resources that a doctor might have once pulled off a bookshelf.

Observers might notice the custom-made lab coats sported by doctors, which have extra-large pockets sized to hold their iPads.

Nurses might be spied managing a patient roster on an iPod touch. And even janitors and other support staff members can be seen poking at a small screen as part of their work.

The Ottawa Hospital has made a commitment to go digital in a big way, with around 2,800 iPads in service or ready to be deployed, and a new phase of a digital plan set to roll out in July.

So far, it's been an overwhelming success, says hospital CIO Dale Potter.

"They feel more engaged, the patients love it because it's a discussion, it's not just a doctor talking," Mr. Potter says.

He first started investigating how to use iPads in the hospital as plans were being developed for a new computerized physician order entry system, which digitized paper forms like prescriptions and orders for tests. The next logical step was to digitize every piece of paper a doctor might encounter and get it on an iPad.

"Any information that a physician could see about your health record they can see on an [iPad] so that's all the consult notes, lab tests, diagnostic images - you can see an X-ray, or MRI or anything on the device - essentially what it has done is eliminated the need for [doctors]to get to a workstation, print a bunch of paper and carry it around."

The hospital's first order was for about 300 iPads a year ago, and hundreds more were delivered in the following months. In July, the hospital will start getting iPads out to even more staff members, including pharmacists, respiratory technicians and physiotherapists.

As for the question of whether the tablets might become breeding grounds for bacteria, Potter says that hasn't been the case.

"A physician typically has a cellphone, they certainly have a stethoscope, they often can wear a tie, they're carrying folders that come and go from records, and what we did is we had these things swabbed. And we took iPads that had been in service for some time, swabbed them, and the iPad was actually the lowest in terms of any colonization of bacteria or microbes or anything else," he says.

"Our hospital is covered with antimicrobial swab cloths. The residents and physicians, whenever they're just standing talking, you'll see them wiping their iPads, it really hasn't become a worry in that regard."

Given all the stories of long wait times and budget cutbacks, some might question how an institution in the cash-strapped health-care sector could afford to purchase hundreds of shiny new toys.

But Mr. Potter says the investment is radically changing how care is provided and in the process is creating time-saving efficiencies that make the devices pay for themselves.

"I get full return on my investment in a matter of a day or two," he says, adding that it's the software, not the hardware, that really costs the hospital a lot of money. He found there was no ready-made software that suited the hospital's needs so he had to get it designed from scratch.

"I would've had to wait 18 to 24 months for the vendors to catch up and I just wasn't willing to do that," he says.

"So we've made significant investments, I would say probably to date around $1-million in development and this year we have about $3-million planned for development."

While Research in Motion has built a reputation for offering the most secure mobile devices for corporate IT structures, Mr. Potter says he's satisfied with the iPad's security.

"The iPad is fully, fully encrypted, even the encryption keys are encrypted so it's a very secure device. And we have a secure network, certified by the province, so the network's not a worry," he says.

Given the investment the hospital has made in Apple devices it wouldn't make much sense to start supporting other brands of tablets or smartphones. But Mr. Potter did briefly consider RIM's tablet, the PlayBook, before quickly moving on.

"We gave PlayBooks to two doctors and the same day they handed them back and said they were not interested." 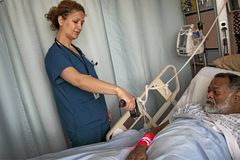