We used to think of caveman life as nasty, brutish and short. But we spent millions of years adapting to the hunter-gatherer lifestyle; in contrast, we've only had agriculture for about 11,000 years. That means our genes are still optimized for life on the savannah, according to advocates of the "paleo" diet. So what exactly did this lifestyle entail?

THE SPEED OF EVOLUTION

The paleo diet depends on the assumption that our genes haven't had time to adapt to the "modern" diet. Since evolution depends on random mutations, larger populations evolve more quickly because there's a greater chance that a particularly favourable mutation will occur. As a result, our genome is now changing roughly 100 times faster than it was during the Paleolithic era, meaning that we have had time to at least partly adapt to an agricultural diet.

The classic example: the ability to digest milk, which developed only in populations that domesticated dairy animals. More than 90 per cent of Swedes, for example, carry this mutation. Finnish reindeer herders, in contrast, acquired genes that allow them to digest meat more efficiently, while other populations can better digest alcohol or grains. The "ideal" ancestral diet is most likely different for everyone.

DON'T JUST EAT IT – LIVE IT

Here are six key elements of the Paleolithic lifestyle, according to Pedro Carrera-Bastos, a Swedish health researcher specializing in the effects of "ancestral" diets, and his colleagues.

Getting enough vitamin D is crucial to bone health, and may also play a role in preventing cardiovascular disease and some cancers. The simplest way to meet your needs: sunlight. But modern office-bound humans rarely spend enough time outside to get enough. Some hunter-gatherer cultures at high latitudes have found other ways – the Inuit, for example, rely on fatty fish for vitamin D.

Go to sleep when it's dark, get up when it's light. Our bodies have powerful internal clocks that try to enforce this simple rule. Even a night or two of disrupted sleep has immediate effects on your appetite hormones ghrelin and leptin. That's why sleep patterns are closely related to obesity and metabolic syndrome: Too little sleep is most common these days, but too much isn't good either.

An obvious one – but easier said than done in the modern world.

The typical hunter-gatherer life punctuated long periods of low stress with short bouts of acute stress that triggered the fight-or-flight response. In contrast, modern office workers often show signs of chronically elevated stress, which can have consequences such as elevated blood pressure and a weakened immune system.

Sure, paleo folks got more exercise than we do. But what kind?

-Large amounts of light-to-moderate activity, such as walking or jogging, while hunting and foraging. Estimates place the typical distance covered at five to 16 kilometres per day.

-Hard days were usually followed by easy days – though not totally sedentary.

-Short bursts of very high-intensity activity. This can be mimicked with interval training once or twice per week.

-Wide variety of daily activities that strengthen the whole body, ranging from carrying children and digging tubers to dancing.

The paleo diet is often hyped as a meat lover's fantasy. While it varies from culture to culture, modern hunter-gatherers typically get only 35 per cent of their calories from meat, with the rest derived from plants. Even if we assume a 50-50 split, the greater caloric density of meat means that, by volume, the paleo "plate" would have had significantly more vegetables and fruit than meat on it.

BOTTOM LINE: So will going paleo really pay off with better health? As a big-picture guide to how to organize your life, definitely. But don't get carried away with trying to recreate the exact details of a long-lost diet. Humans have changed and diversified even over the past few thousand years, so the only way to know what works best for your genes is to experiment. Go wild. 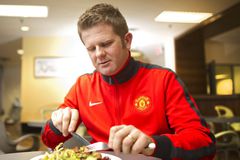 Yearning for fast food? Try the caveman approach
April 28, 2018
Follow Alex Hutchinson on Twitter @sweatscience
Report an error Editorial code of conduct
Due to technical reasons, we have temporarily removed commenting from our articles. We hope to have this fixed soon. Thank you for your patience. If you are looking to give feedback on our new site, please send it along to feedback@globeandmail.com. If you want to write a letter to the editor, please forward to letters@globeandmail.com.
Comments