Most doctors and dietitians would agree that pregnancy is not the time to diet. Moms-to-be who restrict calories also deprive their developing babies of much needed nutrients.

Yet according to a new study published last week in the online edition of the BMJ, dieting during pregnancy is beneficial for some women. Controlling calories was safe and protected from a number of pregnancy-related complications.

Women who are obese during pregnancy have a greater risk of early delivery, gestational diabetes, high blood pressure and pre-eclampsia. (Also called toxemia, pre-eclampsia is marked by the onset of high blood pressure, protein in the urine and swelling (edema) after 20 weeks into pregnancy. If left untreated, it can progress to potentially life-threatening eclampsia.) For the baby, maternal obesity is a risk factor for childhood obesity.

Obesity is on the rise among women of childbearing age. What's more, it's estimated that as many as 40 per cent of women exceed the recommended weight gain during pregnancy.

Given these statistics, it's important to find ways to help women manage their rate of weight gain during pregnancy.

The current study – the largest to date – combined the results of 44 randomized controlled studies conducted in more than 7000 women that investigated the impact of diet, exercise, or both on maternal and fetal outcomes related to weight.

The studies in the analysis mostly involved women who were obese and overweight. Five trials also enrolled women who were diagnosed with gestational diabetes during their pregnancy. (Gestational diabetes increases a woman's future risk of Type 2 diabetes.) The researchers looked at how much weight women gained during pregnancy and whether mother or child experienced any complications.

While all three methods – diet only, exercise only, or the two combined – reduced a woman's weight gain, diet had the greatest effect. Compared to women who were not assigned to a diet or exercise group (the control group), mothers-to-be prescribed a personal diet had an average reduction in weight gain of nearly 8.8 pounds (4 kg).

Dietary advice was provided by registered dietitians and was based on limiting overall calories, balancing protein, carbohydrate and fat, and eating unprocessed foods such as whole grains, fruits, vegetables, beans and lentils. Calorie intake was individualized to the needs of the mother. The women also kept a daily food diary.

There's concern that limiting calories – and nutrients – during pregnancy can result in low birth weight, putting a baby at risk for infection, developmental delays and health problems later in life.

Babies born under 5.5 pounds are considered low birth weight babies. Low birth weight can result when babies are born early (before 37 weeks gestation), are small for their gestational age, or both.

In the study, however, the babies' birth weights were not affected by controlling calorie intake.

The current findings show that by carefully advising women on diet during pregnancy, excess weight gain can be prevented, helping to reduce the risk of complications for mother and baby.

Nutrition is a critical component to a healthy pregnancy. The following strategies are important to protect the health of both moms-to-be and their developing babies.

Weight gain guidelines during pregnancy are based on a woman's body mass index (BMI) before pregnancy. Women with a healthy pre-pregnancy BMI (18.5-24.9) are advised to gain 25 to 35 pounds.

Women with a BMI of less than 18.5 are advised to gain 28 to 40 pounds. Use an online calculator to determine your BMI.

If you're concerned about gaining too much or too little weight during pregnancy, consult with a registered dietitian who can design a meal plan customized to meet calorie needs.

All women who could become pregnant, who are pregnant, or who are breastfeeding should take a daily multivitamin with 0.4 to 1 milligram of folic acid, a B vitamin that's vital to preventing neural tube defects (NTDs) in the developing fetus.

NTDs are serious birth defects caused by the incomplete development of the brain, spinal cord and/or their protective coverings that occurs around the fourth week of pregnancy.

Taking a multivitamin during pregnancy may also guard against low birth weight and childhood cancer in offspring including leukemia, brain tumours and neuroblastoma.

Women who are iron-deficient or who are vegetarians may require additional iron.

I advise my pregnant clients to eat five to 12 ounces of oily fish each week to increase their intake of DHA, an omega-3 fat important for brain and eye development during pregnancy and breastfeeding.

Fish rich in omega-3's and low in mercury include salmon, trout, sardines, herring and Atlantic mackerel. 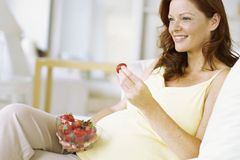 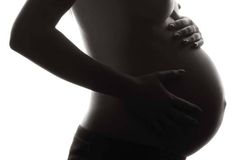