Peter Robinson
Contributed to The Globe and Mail
Published March 9, 2011 Updated May 1, 2018

It was Remembrance Day, 2009, and something didn't feel right about playing hockey that day.

I had been to the cenotaph on Nov. 11 most recent years and my father, Ron, had done the same in Barrie, Ont., where he lived. But this Remembrance Day fell on a Wednesday - hockey day, when I drive up from Toronto to play in our weekly noon game. Recreational hockey players everywhere know the mental anguish you go through when justifying the expense of playing the sport. Life's business means you miss enough skates in the best of times, so if it's remotely possible to make it, you go to get your money's worth.

I scrambled in late as usual as everyone was warming up, Dad's look through the Plexiglass the same had I been late coming home from school 20 years earlier. I hurriedly threw on my equipment and was on the ice about five minutes late.

Soon began our family's painful lesson in the concussion debate currently raging in the hockey world.

Dad, 64 at the time, plays like someone 25 years his junior. A former standout player in university and senior hockey, he once scored the winning goal in his team's Allan Cup triumph. Having kept himself in good shape all these years, he was still a formidable presence on the ice despite being less than a year from cashing his first old-age pension cheque.

But for all his impressive ability, he was no match for the puck that came flying across the ice that day. A player a few metres in front of him had reached out to receive a pass and in doing so had tilted the blade of his stick at an angle. The puck hit that player's stick at a considerable pace and was projected upward at an even faster speed.

It hit Dad square between the eyes.

I was on the bench at the time but it didn't take anyone long to realize this could be serious. A woman with her young children in the arena was noticeably shaken by the sight of blood pouring down Dad's face. The ice around him was crimson.

A few helpful teammates assisted Dad and me in getting him off the ice and ready to go to the hospital. Once in the car, he had the jacked-up disposition of someone who hadn't quite realized he had been through a traumatic incident. Chattering away, alternating between giving me directions to the hospital and making sure he didn't spill blood all over the interior of the car, he seemed more annoyed at the inconvenience than hurt. His ubiquitous companion, Aussie, his yellow Labrador, appeared more concerned from his perch in the back seat.

Once in the emergency room, Dad had a several-hour wait but was stitched up - an even dozen as I recall - just in time for my sister to collect him for their scheduled night out.

Dad and our family's concern at that point was that the scar wouldn't be too bad.

The scar, it turned out, was the least of our worries.

Not long after that game, Dad seemed not himself. Distant, easily distracted and, most worrisome, stricken with headaches that weren't the normal throbbing we all get used to. Worse, these came and went with little predictability.

His shinny mates called to see how he was and most assumed he would be back on skates as soon as his head wound cleared up.

It was around the same time that he began to be forgetful. He would get lost driving. He paid his insurance, only to forget about it and try to pay it again a month later (in a fitting coincidence, his broker organizes our Wednesday shinny sessions).

Later, he was pulled over at a traffic stop and given a ticket for not renewing his licence plate sticker. When he explained the situation to me, I realized his forgetfulness in not renewing it on his 65th birthday was probably because of his condition.

A few months after my father's on-ice accident, Pittsburgh Penguin player Matt Cooke blindsided Marc Savard of the Boston Bruins. Mr. Savard missed months of action, but that incident put the concussion issue square in the focus of the country's hockey community and media.

At the same time Dad was coming to grips with what had happened to him. Diagnosed with a concussion, he was told to rest and do strictly no exercise. A helpful doctor explained that brain injuries are not the same as overcoming broken bones.

Dad showed remarkable perseverance and bravery in overcoming his injury. He accepted that it would be an unknown amount of time before he was fully recovered. Most impressive was his willingness to discard the old athletic notions of "playing through pain" or "shaking it off." Had he done that, we're not sure we would have gotten the Dad we all knew back.

He took almost a year off playing hockey. When he came back, he was his usual self, playing against guys half his age. My Christmas present to him - a face shield - was firmly affixed to his helmet and a mouth guard was securely in his mouth. But age could be catching up to him - he's out with a torn labrum and deciding whether rest or surgery is the best option.

He's likely out for the season but he'll be back. It's nothing compared to what he went through. 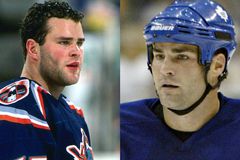 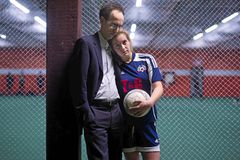