It's a meaty monster that can make even the bravest fast-food fanatic turn chicken - and health and nutrition experts have their doubts whether Canada really is down with the Double Down.

As what is arguably the world's most infamous sandwich makes its debut north of the border, dieticians and academics hope Canadians give KFC's bunless concoction - two slabs of seasoned fried chicken sandwiching bacon, cheese and secret sauce - a wide berth, lest they get wider themselves.

The Double Down's 540 calories, 30 grams of fat and (ulp) 1,740 milligrams of sodium is likely to leave Canuck consumers doubled over in discomfort more than anything else, said Susan Barr, a professor of food nutrition at the University of British Columbia.

"The sodium is extraordinarily high," said Ms. Barr, who's also a fellow with the Dieticians of Canada. The average adult's daily salt intake should be closer to 1,500 mg, she added - a threshold the Double Down exceeds in one single salty supper.

"There's almost no room to eat other food."

Excessive sodium intake over the long term contributes to high blood pressure, which in turn is considered a major risk factor for stroke and cardiovascular disease.

But salt content isn't the only eyebrow-raiser with the Double Down. The sandwich takes up more than a quarter of the 2,000 calories an average adult needs in a day and its fat content is nearly half a day's recommended amount in one serving.

With numbers like those, even the restaurant warns against scarfing a Double Down too often.

"But it's an occasional indulgent eat that consumers will love.... It's everything that Canadians love from a taste perspective."

That sort of reasoning leaves a bad taste in Mary L'Abbe's mouth.

"If we use that argument for a product every day, that's contributing to our issues around obesity," said the University of Toronto professor, who's also vice-chairwoman of the Sodium Working Group, a national coalition of experts that's working to curb Canada's salt intake.

"The reality is there are very few spare calories left over ... for indulgent foods."

"It's a really worrisome trend," said Ms. L'Abbe. But there may be a grain of goodness in all that fat and salt: the buzz around products like the Double Down may end up getting Canadians talking about issues like sodium intake.

"It's very difficult to make them choose not to consume those products, but it's even worse if they consume them without knowing."

The Double Down's debut in the U.S. last year has touched off a domino effect of overly indulgent take-out products, sort of like the extreme-sports version of fast food, said Debi Andrus, a marketing expert at the University of Calgary.

"Who in there wants to be left out of the big, juicy, meaty, high fat, high sodium choice?" Ms. Andrus said. "As soon as one starts it, then the others will look at, 'Well, what can I do to compete with that?"'

The fast food chains are tapping into a demographic that is pushing against the healthy eating trend and giving in to a product that's being unabashedly upfront about being unhealthy, Ms. Andrus added.

Of course, when it comes to Canada, where taste preferences don't move in lockstep with the U.S., the Double Down is far from a safe bet. KFC seems to agree; when the sandwich goes on sale Monday, it will only be available for a month, to see how consumers respond.

Consumer specialist Trevor Norris, a U of T professor who's written a forthcoming book on corporate social responsibility, said he believes it's time the government stopped leaving it up to the consumer entirely.

"We should be asking our government to protect us from corporations who are creating a major burden," Mr. Norris said. Corporations, he argues, should not be free to pass the burden of future health-care expenses to taxpayers if a grossly unhealthy fast food product is wildly popular.

"Is it good business to have an American corporation come in and pass on expenses to Canadians?" Mr. Norris asked.

"There'll be a huge weight placed on the public health system in Canada that we as taxpayers are going to be paying for."

It's Double Down time 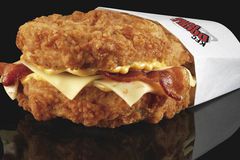 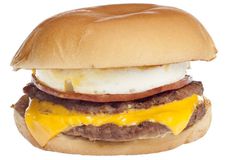 The six health claims that Canada allows on foods Gallery 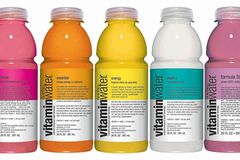 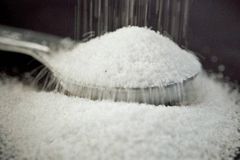