As Toronto Mayor Rob Ford knows all too well, kidney stones can be excruciating. Known medically as "renal colic," the pain of passing a kidney stone can be the most severe that people ever experience. Comparing childbirth with renal colic, many women report that kidney pain is far worse.

The intense discomfort comes from passing jagged crystalline stones down a straw-sized, exquisitely sensitive tube known as the ureter, which connects the kidneys to the bladder. Designed only for liquid, the tube clamps down repeatedly on the intruding pebble in wave after wave of spasm. Patients may feel the stone migrating down from flank to abdomen to groin. They may even start urinating blood, which frightens them more. That's why kidney stone sufferers can be inconsolable, writhing away, unable to settle down in any position.

Last week, Mr. Ford was sidelined by one very painful, close to six-millimetre kidney stone. He checked into a local hospital, complaining of intense pain. The mayor was treated on an outpatient basis and sent home to recuperate.

According to the Kidney Foundation of Canada, about 10 per cent of Canadians will have kidney stones during their lifetime. Men are three times as likely as women to develop the condition, and the number of stones begins to rise as men reach their 40s. Unlike some diseases -which you get only once - having one episode of kidney stones sets you up for having future attacks.

What causes kidney stones? Doctors may be unable to pinpoint causes other than the grab bag of "genetics and family history." Some people are just "stone formers." But several lifestyle factors predispose people to developing stones, including diet, dehydration and obesity. Organ meats, anchovies, beer and gravy are rich in purines, substances that can facilitate stone crystallization. Drinking less than 1.5 to two litres of water a day may precipitate deposits over time. And obese individuals have twice the chance of developing stones compared with those at their ideal weight.

But there is another common culprit: excess salt. "Canadians eat too much salt, much more than the recommended limit of sodium intake of 2,300 milligrams a day," says Sheldon Tobe, an associate professor of medicine at the University of Toronto and a leading kidney specialist. "Excess salt intake is not only linked to hypertension but also calcium stones."

Too much dietary salt seems to "supersaturate" the blood, and calcium stones - the most common type - crystallize out. Dr. Tobe advises his patients to consult the "blood pressure action plan" of the Heart and Stroke Foundation to get salt and lifestyle guidance. You can protect yourself against kidney stones, for example, by having a glass of orange juice daily. Orange juice contains a substance known as citrate, which grabs calcium and promotes safe excretion.

According to the American Urological Association, there are essentially three treatment options for patients with kidney stones, depending on stone size: watchful waiting, shock-wave lithotripsy and open surgery. If a stone is less than six millimetres - as was the recent mayoral stone - doctors may offer pain relievers but allow the patient to "birth it." Though this treatment is quaintly called "watchful waiting," it may be more like grin and bear it.

Shock-wave lithotripsy is like a whirlpool massage therapy for your stones. It works best for stones that have not left home and still sit in the kidney. A high-intensity ultrasound beam delivers hundreds of "acoustic pulses" a second, smashing the stone with sonic booms. This is non-invasive - there is no cutting involved. The disadvantage is that the machines are expensive, require repeated sessions and are not available in every hospital.

Some patients have such large stones that they can't be passed and may cause kidney infections, blockage, damage and possible kidney failure. Huge stones known as "staghorn calculi," for example, resemble the shape of deer horns and can lead to numerous complications. Kidney surgeons have varying approaches, but sometimes the only option is to open the abdomen surgically and remove the entire kidney.

If you are concerned about the health of your kidneys, speak to a professional. Doctors are frequently untangling conflicting advice about kidney stones that patients have hunted down for themselves on the Internet. (Several sites promise same-day stone passage, provided you use their product.) Avoiding a kidney stone attack - either the first or a subsequent one - is about more than just drinking lots of water or buying the latest herbal miracle. As with all important medical conditions, there is a whole lifestyle regimen to be followed. 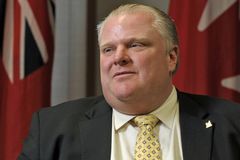 Rob Ford back home after kidney stone procedure
April 30, 2018
Canada's kidney donor registry now nationwide
April 28, 2018
Follow us on Twitter @globe_health Opens in a new window
Report an error Editorial code of conduct
Due to technical reasons, we have temporarily removed commenting from our articles. We hope to have this fixed soon. Thank you for your patience. If you are looking to give feedback on our new site, please send it along to feedback@globeandmail.com. If you want to write a letter to the editor, please forward to letters@globeandmail.com.
Comments