As an emergency-room nurse in an inner-city hospital, Erin Taylor has seen all manner of suffering and trauma and has had people die on her watch. She has treated victims of shootings and stabbings, as well as desperately ill patients in kidney failure. But it wasn't until she watched an episode of the television series Grey's Anatomy about a chain of kidney transplants that she was inspired to help in a whole new way.

Ms. Taylor, 30, of Edmonton, decided to donate her kidney and save a stranger's life. "I found it intriguing that people can give a kidney away and essentially never miss it," she said. "I like the idea of paying it forward."

She is part of an innovative initiative called the Living Donor Paired Exchange Program that has just completed its 100th successful living-donor transplant two years after launching.

So far, one in five living donors in the program are people like Ms. Taylor – people who aren't bound to patients by blood or family ties. They are giving up a kidney purely for altruistic reasons. Often they cannot pinpoint exactly what motivates them, and must endure the strained reaction of colleagues who wonder why they choose to undergo unnecessary surgery.

But it is thanks to their generosity that the program, run by Canadian Blood Services (CBS), has been such a success. While Canada's deceased kidney-donor rate is only 23rd in the world, the growth in living kidney donation has been remarkable, and can be attributed in part to people such as Ms. Taylor. Today, living donors account for one-third of all 1,200 annual kidney transplants in Canada.

The unique aspect of the kidney exchange program is that it allows a friend or relative whose kidney is not compatible with the patient to donate to someone else, and for their friend or family member to in turn be matched with another person's incompatible donor. The pairs are mixed and matched in a registry; everyone undergoes surgery at the same time so that donors can't change their mind. A donor such as Ms. Taylor widens the pool of matches; her decision to donate to a patient in Vancouver triggered a chain of two more transplants.

Canada's national rate of deceased donation has been static for years, although it recently increased in Ontario. But the nation lags behind most Western European countries, as well as Latvia and Malta, with a deceased-donor rate of about 13 per million, a number which refers to those who actually donate kidneys, not to those who sign organ donor cards. There are complex reasons for this, including an aging population and fewer traffic and trauma fatalities. In contrast, Canada's living kidney donor rate is eighth in the world, and has grown by 25 per cent in recent years.

"Before, about 250 living donors were turned down every year because they didn't match their intended recipient. Now we have an alternative way for them to donate," noted Peter Nickerson, CBS's executive medical director of transplant.

The epidemic of kidney disease in Canada also means demand far outpaces supply. A recent article in The Lancet calls the shortage of organs "a worldwide crisis" that has led to a global trade in human body parts, where Westerners buy kidneys on the black market in India and the Philippines. A living donor program can help combat this illegal trade, as can encouraging people to consider deceased donation.

Ms. Taylor, who is recovering in her Edmonton home from surgery, said helping several patients, not just one, made donating more appealing. While curious to meet her recipient, she also understands the need for anonymity. "I do wonder about my recipient from time to time and I wrote them a letter [through the program co-ordinator] But I'm okay if I don't get one in return. I understand that they may want to simply move forward," she said.

Her parents and boyfriend have been very supportive, although not everyone shares her enthusiasm. "One person said, 'Wow, I'm way too selfish for that,' while another hinted they would wait to see if a family member needed their kidney first," she said.

The recovery has been more difficult than she imagined, although she plans to return to work six weeks after surgery – and to her favourite sport, competitive roller-derby. Her teammates have purchased her a kidney protection belt. "I have seen a lot of suffering on the job," the nurse said. "This seemed like a good thing to do." 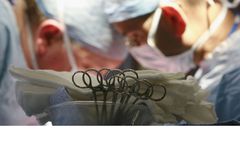 Dialysis three times a week may not be enough
September 22, 2011 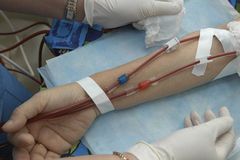 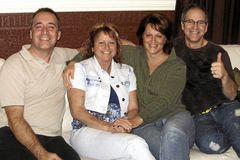 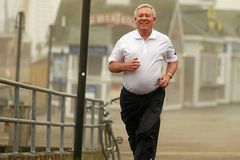