Most people trying to manage their weight don't eat chocolate on a regular basis for fear of consuming too many calories, not to mention excess fat and sugar.

But new study findings published earlier this week in the Archives of Internal Medicine, suggest you don't have to ditch chocolate from your diet. According to the researchers, frequent chocolate eaters actually weigh less – not more – than people who seldom eat it.

Chocolate, in particular dark chocolate, has previously been linked to a lower blood pressure and cholesterol level. Regular chocolate consumption has also been shown to improve how the body uses insulin, the hormone that sends glucose (sugar) from the bloodstream into cells where it's used for energy.

High blood pressure and elevated blood glucose are two features of metabolic syndrome, a disorder believed to double the risk of heart attack and increase the likelihood of developing type 2 diabetes by fivefold.

Having a large waist circumference is another part of the metabolic-syndrome picture.

For the study, researchers from the University of California in San Diego wanted to find out if the benefits of chocolate also extended to reducing body fat, offsetting its extra calories.

They obtained dietary data from 1,018 healthy men and women, average age 57. Participants were also asked how many times per week they ate chocolate. Body weight and height were measured to determine each participant's body mass index (BMI).

BMI is calculated by dividing a person's weight (in kilograms) by his height (in metres squared). BMI values from 18.5 to 24.9 are defined as normal weight and linked with a lower risk of health problems.

Adults who ate chocolate more frequently had a lower BMI than those who consumed it less often, despite eating more overall calories. In fact, BMI was one point lower among people who indulged five times a week compared to not at all. One point on the BMI scale translates to seven pounds if you're 5 foot 10, or a five pound difference if you're 5 foot 3.

Researchers suspect that one flavonoid in chocolate called epicatechin may help explain the lower body weight finding. In animals, epicatechin has been shown to boost metabolism, increase muscle mass and reduce weight without changing calories or exercise.

In other words, these findings suggest the quality – rather than just the amount – of calories may impact body weight, an interesting concept but certainly one that has not been proven. Calories do matter when it comes to weight control.

Flavonoids do have beneficial heart effects: They inhibit blood-clot formation, help blood vessels relax, and slow the oxidation of LDL cholesterol (oxidized LDL cholesterol is thought to be a more dangerous form of cholesterol).

If you love chocolate, the findings from this week's study may seem like good news. But they don't mean you can eat as much chocolate as you want. The researcher, Dr. Beatrice Golomb, told me her analysis hinted that the more chocolate eaten at one occasion had less favourable effects on body weight.

Nor do these findings mean eating chocolate will help you lose weight. They are simply a correlation and don't prove cause and effect.

Keep in mind that a 100 gram bar of Lindt dark chocolate packs in 533 calories, 40 grams of fat and 26 grams of sugar (almost seven teaspoons worth), despite its flavonoids content. I'm pretty sure many of us who don't run marathons would gain weight eating that much each day. Even three squares – 30 grams – delivers 160 calories.

Previous research suggests you need only a little chocolate to get protective effects. A 2007 study conducted in people with borderline hypertension and hypertension found that each 6.3 grams – 30 calories worth or about two Hershey's Kisses – was enough to lower blood pressure. While the magnitude of blood pressure lowering was small on an individual level, it was noteworthy. In the population at large, such reductions would translate into lower death rates from heart disease and stroke.

While chocolate is by no means a panacea for weight gain – or metabolic syndrome for that matter – evidence certainly suggests you may indulge frequently, but modestly, and potentially reap health benefits.

My advice: Keep your portion size of chocolate small – 1 or 2 ounces – and make room in your diet for other flavonoid-rich foods that come with fewer calories and more nutrients such as berries, red grapes, apples, oranges, grapefruit, kale, spinach, broccoli, garlic, onions, nuts, soybeans, and green and black tea.

Try these suggestions to add a small portion of chocolate to your diet.

• Read labels. Look for dark chocolate that contains at least 70 per cent cocoa solids. The greater the percentage of cocoa solids, the more flavonoids.

• Enjoy a small square of dark chocolate after lunch to help curb sweet cravings later in the afternoon.

• Sip on a mug of homemade hot dark chocolate by mixing cocoa powder with skim milk or unflavoured soy beverage. Add half a teaspoon of sugar for sweetness if desired.

• For a healthy dessert, dip strawberries in melted dark chocolate.

• For a breakfast treat, add small pieces of dark chocolate to pancake and waffle batters. 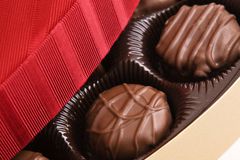 A legendary chocolate a century in the making
January 25, 2011
Follow Leslie Beck on Twitter @lesliebeckrd
Report an error Editorial code of conduct
Due to technical reasons, we have temporarily removed commenting from our articles. We hope to have this fixed soon. Thank you for your patience. If you are looking to give feedback on our new site, please send it along to feedback@globeandmail.com. If you want to write a letter to the editor, please forward to letters@globeandmail.com.
Comments