The largest genetics-based study of multiple sclerosis ever conducted is casting significant doubt on a controversial theory that the disease is a vascular condition caused by blocked neck veins.

The study identified more than two dozen new genetic variants common to people with MS and found the majority of genes involved are pivotal to the immune system.

The discovery strongly suggests MS originates as an inflammatory immune response and casts aside "eccentric and maverick ideas" that it is caused by venous abnormalities, said Alastair Compston, neurology professor at the University of Cambridge and a joint lead author of the study.

"One can say that this provides absolutely no support whatsoever for that [blocked veins]idea," Prof. Compston said.

The study is sure to stoke debate in Canada's MS community, where many patients and researchers are divided over the controversial theory made popular by Paolo Zamboni. The Italian doctor believes MS is caused by venous abnormalities, a theory that has been seized upon by thousands of patients across Canada who have flown to expensive overseas clinics for treatment of blocked veins.

Proponents of the Zamboni theory have used social media to pressure politicians into bringing the unproven treatment to Canada. The federal government recently announced it will invest funds in a clinical trial of the procedure.

David Hafler, professor and chair of the neurology department at the Yale School of Medicine, said it's "shameful" so much attention and investment is being placed on an idea that is simply not true in light of findings about the immunological roots of the disease.

"We now know the cause of MS. It's no longer a mystery," said Dr. Hafler, who was involved with the new study.

Nearly 250 researchers working as part of a major international consortium found 29 new genetic variants common to MS and confirmed that 23 previously identified genetic associations are linked to the disease.

In addition to playing a role in the immune system, one-third of the genes involved in the research are also linked to other autoimmune conditions, including Type 1 diabetes, rheumatoid arthritis and Crohn's disease. The findings are published Thursday in the journal Nature.

"It really kind of brings absolute clarity and precision to what is the starting point of this disease mechanistically," said Prof. Compston, who jointly led the study on behalf of the International Multiple Sclerosis Genetics Consortium with Peter Donnelly from the University of Oxford on behalf of Wellcome Trust Case-Control Consortium.

While the discovery is important, the large number of genes implicated in MS also indicates how complex it is and how much more work remains to be done, said Amit Bar-Or, associate professor of neuroimmunology and director of the experimental therapeutics program at the Montreal Neurological Institute and Hospital.

"It hasn't made things any simpler. It's made them more complicated," he said. "We are several steps away from translating this to effective therapy but it's an important step."

MS is a debilitating condition in which the body's immune system damages the protective sheath that covers nerves, interfering with the brain's ability to send messages to the body. Symptoms vary between patients and can include fatigue, balance problems, difficulty walking, bladder dysfunction and paralysis.

Although it's a common disease, particularly in Canada, which has one of the world's highest rates, research has been plagued by the fact no one clearly understands what causes it and how it unfolds. Significant debate has centred on whether the disease starts as a degenerative condition which then prompts an inflammatory reaction from the immune system, or vice versa.

Researchers believe that a certain set of factors causes genes to change, which leads to the development of MS.

While no one knows what causes the disease, many in the scientific community say a combination of genetic and environmental factors are involved. A growing amount of research suggests a link between vitamin D deficiency and increased risk for MS.

Dr. Hafler said that while the findings are important, there is a long way to go before researchers understand the early stages of the disease, its progression and whether any predictive testing methods could be developed.

"This is the beginning of the understanding," said Dr. Hafler, who was one of the researchers involved in the study.

He also hopes the new research can help quell "hysteria" surrounding the theory MS is caused by blocked neck veins.

Despite the fact thousands of patients and advocates believe the Zamboni theory is true and many who have undergone the vein-widening procedure report feeling much better, scientific research examining the idea has been mixed.

On the other hand, a growing body of research from a variety of academic centres has been unable to replicate the findings. For instance, this week a study published in the Archives of Neurology found no significant difference in venous abnormalities between MS patients and healthy controls.

The results "refute that hypothesis and corroborate those of other investigators who have recently been unable to replicate the Zamboni et al observations," the study authors wrote. 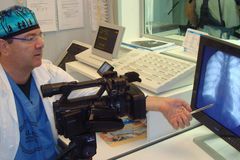 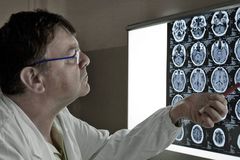 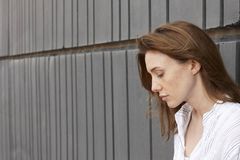