Because of her cerebral palsy, four-year-old Scarlett Wilgis has trouble opening her hands and can't get around without help. Her parents have scoured store shelves and websites for toys for her but have mostly been disappointed.

"Finding the toys at Wal-Mart or Target, they're pretty much non-existent," said mom Dezaraye Wilgis, sitting with Scarlett in front of their twinkling Christmas tree in St. Augustine, Fla. "Or if you get them through a medical supplier they're extremely expensive."

While major toy makers have changed with the times and sell dolls with wheelchairs and crutches, those designed to be used by children with severe disabilities are still difficult, if not impossible, to find. Because the toys have to be customized for each child, the cost can skyrocket.

This conundrum gave two University of North Florida professors an idea: mix engineering and physical therapy students in a lab with the goal of converting toys from store shelves into custom-made fun for disabled children. The Adaptive Toy Project is now in its third year and has drawn a five-year grant from the National Institutes of Health (NIH). It is helping families such as Scarlett's while giving the students a dose of community service and real-world experience that will stick with them long after graduation.

Dr. Alison Cernich, a neuropsychologist and director at the NIH's Eunice Kennedy Shriver National Institute of Child Health and Human Development, said the agency funded the program because it forces students from different fields to collaborate and solve a problem in the community.

"This program is getting students in the early phases of their training thinking about ordinary objects, toys, and how to adapt those toys so that children with limitations can use and play with them like children without limitations," she said.

On a recent day, the school's small lab buzzed with the sound of tools and chatter as students customized cars for their new owners.

Chris Martin, an electrical engineering student, had removed the hood of Scarlett's car, exposing its wires.

A large push button replaced the steering, and light sensors mounted underneath the car will allow it to follow a line of tape along the floor whenever Scarlett hits the button. Now, Scarlett's parents can design routes for the car with tape or use a remote-control mode for family walks.

When Martin first met Scarlett's mother, "she actually cried, and it just made me want to work harder," Martin said. "I just want to make it as perfect as possible for her."

Mary Lundy, a UNF professor of physical therapy who started the Adaptive Toy Project with an engineering colleague, said the students meet with families, and go to therapy appointments and schools.

"Engineering students teach the physical therapy students how to modify basic electronics … and in the process engineers learn how to do people-centred designs, and how to look at their clients differently," Lundy said.

For the kids, it's also a way to continue important therapies through play.

Dr. Peter Rosenbaum, a professor of pediatrics at McMaster University in Hamilton, said his field is increasingly focusing on "augmented mobility," to give kids a way to move around so they can be more independent.

"We can't fix them," Rosenbaum said. "What we can do instead is say, 'What would a child at this age and stage of development be doing if they didn't have their impairment? How can we give them those experiences?' This changes the perspectives of everyone around her, and her perspective of herself."

UNF's program is one of 60 related toy-car programs for disabled children internationally that are part of the Go Baby Go network, but is the only one that has enlisted students to customize the vehicles for free.

After weeks of work, Scarlett finally tested the car Martin and his colleagues built. They strapped her in and showed her how to hit the push button in the toy she would hopefully use for at least three years. The car drove forward, and Scarlett rocked back and forth. Her mother fought back tears, and her father walked alongside her.

"For her, she's going to be able to get out more and not be trapped by a wheelchair … and for us it'll be nice to see her interact with other children. It's amazing," Dezaraye said.

Should you keep a late-birthday child back from starting school?
October 27, 2016 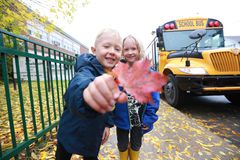 Legally blind photographer Hani Al Moulia brings refugee crisis into focus
October 13, 2016
Report an error
Due to technical reasons, we have temporarily removed commenting from our articles. We hope to have this fixed soon. Thank you for your patience. If you are looking to give feedback on our new site, please send it along to feedback@globeandmail.com. If you want to write a letter to the editor, please forward to letters@globeandmail.com.
Comments