It might not sound all that significant until you consider that Ms. Hutchinson was completely paralyzed nearly 15 years ago after a brain-stem stroke. She has locked-in syndrome, meaning she can't speak and is only able to move her eyes and head.

But on that day in April last year, Ms. Hutchinson was able to fetch coffee with the help of a robotic arm that used a small device implanted in her head, called BrainGate, to read the electrical signals in her brain. All she had to do was think about reaching her arm out to grab the bottle of coffee, and the robotic arm responded.

"This was the first time in nearly 15 years that she had been able to pick up anything solely of her own volition, and the smile on her face when she did this was something that I, and I know our whole research team, will never forget," said Leigh Hochberg, associate professor of engineering at Brown University in Rhode Island and critical-care neurologist at Massachusetts General Hospital and Harvard Medical School in Boston.

The monumental move, detailed in a study published Wednesday in the journal Nature, was the result of years of work by Dr. Hochberg and his colleagues. It's raising hopes that one day, people who have lost limb function because of injury or disease may be able to regain some independence.

"This would be amazingly liberating for people, that they could drink and eat at will and they wouldn't require someone to be there to give them a drink of water," said John Donoghue, one of the study's authors, a senior research scientist at the Providence VA Medical Center and director of the Brown Institute for Brain Science at Brown University.

Two patients were involved in the trial: Ms. Hutchinson and a man in his late 60s, identified as Bob, who also suffered a brain-stem stroke that led to locked-in syndrome.

Both of them had the BrainGate system, a small sensor the size of a baby Aspirin, implanted on top of their heads, near the area of the brain that controls movement. Ninety-six electrodes in the device pick up the electrical impulses of neurons in the brain and transmit those signals to a computer, where algorithms translate them into commands that cause the robot arm to move.

In earlier studies, the patients demonstrated the ability to move a cursor on a computer screen. But, in this case, they accomplish a far more complex task – they were able to use their thoughts to move a robotic arm which reached out and grasped foam targets. Ms. Hutchinson was also able to make the arm pick up a bottle of coffee and bring it to her mouth for a drink.

In a written response provided to the media, Ms. Hutchinson said moving the robotic arm wasn't an excessively taxing challenge.

"I think about moving my hand and wrist. I'm right-handed, so it's very comfortable and feels natural to imagine my right hand moving in the direction I want the robotic arm to move."

The researchers noted that despite the brain's ability to adapt and change, it is remarkable that the patients' brains continue to send signals for movement, considering they have been paralyzed for many years.

The movement of the robotic arm is slow and, at times, appears almost clumsy. The accuracy level of the study patients was also inconsistent. For instance, Ms. Hutchinson was able to touch the target object in about 49 per cent of cases using one type of robotic arm called DLR and about 70 per cent of cases with DEKA, a robotic arm with a wider grasp.

The results demonstrate how much scientists have yet to learn about how the brain controls movement and what various electrical signals mean.

But the fact that researchers have been able to translate a paralyzed person's intentions into movement is a significant feat.

Despite the initial excitement, it's definitely an uphill road to refine the technology so it can be used to help paralyzed individuals brush their own teeth or feed themselves.

Scientists don't yet know how to interpret or harness all the brain signals involved in carrying out many daily tasks. And if this type of brain-computer interface is to be of practical use, scientists need to develop a compact, implantable model so individuals can be mobile and technicians won't have to be on hand to make sure it works properly.

Drs. Hochberg and Donoghue have had a financial interest in BrainGate research. Dr. Donoghue is the former chief scientific officer and director of Cyberkinetics Neurotechnology Systems Inc., which directed previous research and provided funding. Dr. Hochberg indirectly received funding from Cyberkinetics through the Massachusetts General and Spaulding Rehabilitation Hospitals. The intellectual property of Cyberkinetics is now owned by BrainGate, a privately held firm.

Many challenges lay ahead, but researchers such as Dr. Popovic are convinced the day is coming when paralyzed individuals will be able to regain their independence with the help of technology.

"Even though it's still far out, maybe it's not that far out," he said. "Maybe this will come at a galloping speed." 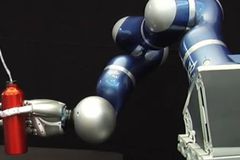 Surgery lets man walk away from potential paralysis
April 27, 2018
Follow Carly Weeks on Twitter @carlyweeks
Report an error Editorial code of conduct
Due to technical reasons, we have temporarily removed commenting from our articles. We hope to have this fixed soon. Thank you for your patience. If you are looking to give feedback on our new site, please send it along to feedback@globeandmail.com. If you want to write a letter to the editor, please forward to letters@globeandmail.com.
Comments