Women born in India and living in Canada are slightly more likely to have male children than other mothers living in this country, raising the possibility of sex-selective abortions.

But the researchers warn that without any evidence documenting this trend, it's impossible to conclude that female feticide is the only explanation.

"We need more data … or we have the risk of committing a wrong by filling in the blanks that need to be filled in by data, not assumptions," said Joel Ray, lead author of the study and a physician and scientist at Toronto's St. Michael's Hospital who focuses on obstetrical medicine.

Researchers looked at data for all single (not twins or triplets) live births that took place in Ontario from 2002 to 2007 and categorized mothers based on their country of origin.

They found the ratio of male to female births was even for all women except those from India and South Korea. Women from those countries who had one prior child were much more likely to give birth to a boy. But the trend was much more noticeable for Indian-born mothers with two or more prior children.

The issue of sex-selective abortions has received considerable attention in recent months, following the publication in January of an editorial in the Canadian Medical Association Journal that claimed female feticide is a serious issue in Canada.

The editorial, which was based on research that also found a higher proportion of males being born in Canada to Indian-born mothers, called for a ban on disclosing the sex of the fetus until 30 weeks, when it would be considered too late to have an abortion. Most patients undergo ultrasound at 18 to 20 weeks.

Although the preference for sons remains the most "likely reason" for the higher ratio of males to females among Indian-born mothers in Canada, the authors say, they note an investigation needs to be done to determine the impact of other potential factors, such as implanting only male eggs during in-vitro fertilization.

One of the world's leading authorities on sex-selective abortions warns the study has several key limitations that should dampen any temptation to conclude female feticide is a major issue.

Prabhat Jha, chair in disease control at the University of Toronto and director of the Centre for Global Health Research at St. Michael's Hospital, calculated that the actual number of females born to Indian women was only slightly under the expected normal range.

During the study period, about 4,100 babies were delivered to Indian-born mothers who already had two or more children. Using the "normal" ratio of 1.05 males to female births, the number of baby girls expected to be born in that group would be 1,999; the actual number was 1754.

The calculations show the total number of "missing" girls is 245, which equals about 35 births per year, or less than one per cent of the total births to Indian-born women.

Dr. Jha said in an e-mail if sex-selective abortion is at play, it is a very small problem and other "important but subtle biases," such as migration of Indian women about to give birth to a son, could help explain the trend.

Dr. Ray said he plans on doing a study looking at pregnancy termination rates and the country of origin of mothers in order to better understand the issue of female feticide.

Even if sex-selective abortions are a problem in Canada, Dr. Jha noted that restricting gender-identifying ultrasounds until 30 weeks gestation may do more harm than good, as any possible solution to the issue "should be commensurate with the size and consequence of the problem." Opinion
Why care less about the disabled fetus?
January 19, 2012 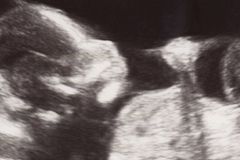 Opinion
Is it okay to abort girls?
February 7, 2012
Follow Carly Weeks on Twitter @carlyweeks
Report an error Editorial code of conduct
Due to technical reasons, we have temporarily removed commenting from our articles. We hope to have this fixed soon. Thank you for your patience. If you are looking to give feedback on our new site, please send it along to feedback@globeandmail.com. If you want to write a letter to the editor, please forward to letters@globeandmail.com.
Comments