Taylor Binns was nearly blind by the time he met Allan Slomovic this fall at Toronto Western Hospital. A rare, extremely painful disorder that damages stem cells in the cornea had blurred his vision. Sometimes it felt as if he was being stabbed in the eyes with a knife.

But the fourth-year commerce student at Queen's University in Kingston is celebrating the gift of sight this holiday season thanks to his kid sister, Tori, and a new stem cell transplant program started by Dr. Slomovic and his colleagues.

Tori, 19, donated stem cells from her left eye for the operation, which took place Nov. 30. Before the surgery, Mr. Binns couldn't see the big "E" on the top of the eye chart. Now, his vision is good enough to drive a vehicle, read street signs and, for the first time, see his girlfriend. As well, his pain has been greatly reduced.

"It is the greatest gift. I couldn't ask for anything better. I can't explain how much it means to me, what Tori did," said the 23-year-old.

Mr. Binns was the first patient in a program that could eventually help several dozen people a year. It means Ontario patients who need stem-cell transplants will no longer have to travel to a specialized clinic in Cincinnati for the procedure.

His eyes became sore and red 3 1/2 years ago during a trip to Haiti to build a school and repair a hospital. His vision became increasingly blurry, the pain more intense However, it took more than three years to get the correct diagnosis - stem-cell deficiency. The stem cells that replenish the corneas and keep them clear had been destroyed or damaged.

"The cornea is the watch glass of the eye. It is what you look through in order to see," said Dr. Slomovic.

Without stem cells to keep it healthy, the cornea becomes cloudy and can get pockmarked with abrasions and painful ulcers.

In Mr. Binns's case, the damage to the stem cells was caused by wearing contact lenses, said Dr. Slomovic.

"It can occur but it is very rare," he said. Normally, stem-cell deficiency results from an industrial accident, from getting acid in the eyes, for example. The condition is debilitating, and can leave patients blind, in pain, and often unable to work. In the case of Mr. Binns, his left eye was far worse than his right one.

It is possible to do the surgery with tissue from the eye bank, but there is a better chance of success if stem cells come from a sibling. Doctors at Toronto Western determined that Ms. Binns was a perfect match. She didn't hesitate.

"I don't know how he managed it for this long. We are really happy for him, that he can finally live again. He was on every sports team, the captain of everything. For once, I can help him out," said Ms. Binns, the youngest of three children.

She recently moved from the family home in Orillia, Ont., to Toronto, where she is working at an upscale hair salon. She said she didn't feel nervous until two or three seconds before the procedure, which was done once her left eye was frozen with a local anesthetic.

Dr. Slomovic removed stem cells and a small amount of tissue and put them in a Petri dish.

Then he and his colleagues performed surgery on Mr. Binns's left eye. First, Dr. Slomovic removed scar tissue. It came off like a sheet, a promising sign. Then he used very fine stitches and special glue to attach the new tissue in place. The surgery was done under the microscope.

"It was weird getting used to seeing again," he said.

Dr. Slomovic expected that Mr. Binns would also require a corneal transplant, but it looks like that won't be the case. But to prevent rejection, he will have to take drugs that suppress his immune system for several years. He may also need a second transplant to fix his right eye, which still causes him pain.

Dr. Slomovic said the new program is a collaborative effort with colleagues on the kidney transplant team, who have the expertise on anti-rejection drugs and can offer presurgical counselling for donors about the risks of the surgery.

Edward Cole, who helped set up the new transplant program, cautions that with only one surgery performed so far, it is too early to call it a success.

"We hope things continue to go well, but it is way too early to declare victory," said Dr. Cole, who is also Physician-in-Chief of the University Health Network.

But it feels like a victory for Mr. Binns and for his sister, who has recovered from her surgery. The star rugby player can think about playing competitive sports again and has started applying to law schools. He is looking forward to being able to study without using giant-size text on his computer and to being able to focus on a screen for more than 45 minutes without getting a severe headache.

"It is amazing to be able to see again." 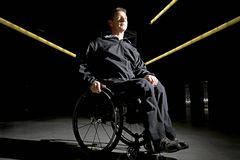