Wheat - the "staff of life" - is looking downright unhealthy.

Naturopaths who used to rhapsodize over stone-ground sourdough are advising clients to treat wheat like a biohazard. And ever since Oprah, Gwyneth and the Old Spice Guy (a.k.a. Isaiah Mustafa) started raving about "detoxing" from wheat, it seems everyone has been going gluten-free.

Gluten (Latin for "glue") sounds like something you'd want to be free of - until you grasp the implications. Gluten is a protein found in rye, barley and wheat. It's what makes bread chewy and cakes moist. It fills beer with malty goodness. Amazing stuff.

But the very thing that gives baked goods that spring may be the culprit behind an array of health problems, including diarrhea, eczema, headaches, joint pain and depression, researchers suggest.

No wonder so many people are talking about having "gluten issues."

Although the symptoms may seem nebulous, gluten sensitivity is a real condition, says Alessio Fasano, director of the University of Maryland Center for Celiac Research. Dr. Fasano says gluten sensitivity is part of a spectrum that includes wheat allergy and celiac disease, an autoimmune disorder that attacks the small intestine when even trace amounts of gluten are consumed.

About one in 100 people has celiac disease, and with it, increased risk of osteoporosis, infertility and intestinal cancers, according to the Mayo Clinic.

But the prevalence of non-celiac gluten intolerance is unknown, Dr. Fasano says, adding that medical knowledge of gluten sensitivity today is where it was with celiac disease 10 years ago. "The field is very foggy."

Until a biomarker for gluten sensitivity is found, doctors must rely on a gluten-free diet for diagnosis, Dr. Fasano says. If, after testing negative for celiac disease and wheat allergy, patients' symptoms improve after one month of avoiding even a speck of gluten, they are considered gluten sensitive, he says.

Published studies of gluten sensitivity tend to be small, including a recent double-blind randomized trial involving 34 patients at Monash University in Victoria, Australia. The research, published in January in The American Journal of Gastroenterology, found that gluten triggered symptoms in non-celiac patients with gastrointestinal problems. It concluded that "non-celiac gluten intolerance may exist."

Vikki Petersen, a chiropractor, clinical nutritionist and author of The Gluten Effect, estimates that up to 40 per cent of the population have some form of gluten sensitivity. The figure is based on clinical observations at her wellness centre in Sunnyvale, Calif., as well as statements made by Enterolab in Dallas, she says.

Enterolab is a private laboratory that offers a "gluten sensitivity stool and gene panel" test on its website for $369 (U.S.).

Gluten sensitivity affects all systems in the body and may lead to recurrent miscarriage, skin disorders, anxiety, migraines, digestive problems and premature death, Ms. Petersen says. "The human body is actually not designed to digest this protein."

She points to an analysis of mortality in 35,000 Swedish patients from 1969 to 2008, published in the Journal of the American Medical Association. The study included patients with inflammation of the small intestine, celiac disease or "latent celiac disease" - those with elevated gluten antibodies in a blood test but a negative intestinal biopsy. Compared with the general population, the risk of death for patients with gluten-related disorders was "modestly increased," the study concluded.

For the gluten-free brigade, the Swedish study is proof that gluten is toxic.

But Dr. Fasano cautions against confusing atypical, latent or potential celiac disease with gluten sensitivity, which by his definition rules out all forms of celiac disease and wheat allergy.

Dr. Fasano says he disagrees with assertions that a third of North Americans have gluten sensitivity. "I have a really hard time believing that we are plagued by this."

That 30 to 40 per cent of the population has a gene associated with celiac disease is meaningless since it is not a single-gene disease, he adds.

A small percentage of people avoid gluten out of medical necessity, he says, but the majority do it "because it's fashionable, like the South Beach diet."

Feeling bloated after eating too much bread is like getting diarrhea after binging on blackberries - a natural consequence of overindulgence, Dr. Fasano says. He adds that gluten is difficult for everybody to digest, "not just for celiac or gluten-sensitive or allergic folk."

Urban lore suggests that more people are developing gluten sensitivity because today's wheat has higher gluten content than in decades past. But according to data from the Canadian Grain Commission, there was no upward trend in the protein content of Western Canadian wheat from 1927 to 2009. In fact, the amount of protein was higher in 1940 than it is today, and the 83-year mean was 13.6 per cent.

Going gluten-free may do more harm than good, according to Rosie Schwartz, a Toronto dietitian and author of The Enlightened Eater's Whole Foods Guide.

The diet could mask celiac disease, since people who cut out gluten may not show antibodies in blood tests used to detect the disease. Instead of latching onto the gluten-free fad, people with digestive problems should "eat lots of gluten and then go for the blood test," she says.

Without a diagnosis, people with underlying celiac disease are unlikely to maintain the strict gluten-free diet required to lower their risk for cancer and other long-term effects of untreated celiac disease. As well, they may mistake gluten sensitivity for more common causes of digestive symptoms, such as lactose intolerance, Ms. Schwartz says.

If a person tests negative for these disorders and still decides to go gluten-free, replacing wheat with whole grains such as buckwheat and quinoa can be a healthy choice, Ms. Schwartz says. But now that everything from gluten-free cookies to frozen pizzas are on the market, she adds, "unfortunately, I don't see that happening much."

Gluten sensitivity may affect the digestive and central nervous systems. At the University of Maryland Center for Celiac Research, patients diagnosed with gluten sensitivity - without celiac disease or wheat allergy - reported the following symptoms:

Gluten-free has gone mainstream - but how long will that last?
February 1, 2011 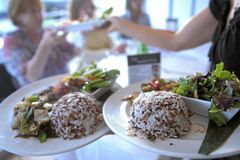 What to feed the family?
June 8, 2010
Celiac disease: an elusive 'iceberg'
July 9, 2008
Follow Adriana Barton on Twitter @AdrianaBarton
Report an error Editorial code of conduct
Due to technical reasons, we have temporarily removed commenting from our articles. We hope to have this fixed soon. Thank you for your patience. If you are looking to give feedback on our new site, please send it along to feedback@globeandmail.com. If you want to write a letter to the editor, please forward to letters@globeandmail.com.
Comments