The H1N1 pandemic is over, but for those who suffered through the disease or watched loved ones ill with it, the scars remain.

My 25-year-old son was felled by H1N1 last October and though he survived, his ability to breathe is severely limited by permanent scars the virus left in his lungs. Previously athletic and energetic, he's now winded by walking up a flight of steps.

The same medical experts who didn't know exactly how to treat this virulent disease now don't know exactly how long recovery takes or if victims will ever completely get well. All they can say is it may take up to two years to recover from H1N1 and some effects may be long-lasting or lifelong.

I hope and pray my son experiences a total recuperation, but as his mother I know I will never get over the experience of watching him fight the disease.

Our nightmare began with a phone call at 3 a.m. from a doctor in the intensive care unit of Edmonton's Royal Alexandra Hospital. He was calling to say Lindsey had been admitted with what they were assuming was H1N1 and he was on a ventilator in a medically induced coma. The doctor said I needed to come soon. His exact words, spoken in a grim tone, were, "If it were my kid, I'd get here right away."

The dark, rain-soaked ride to the Vancouver airport at 4 a.m. was surreal. We caught the first flight out at 6:30 a.m., and after an interminable cab ride from Edmonton's airport, we arrived at the hospital by 9 a.m.

We were met by a doctor at the door to Lindsey's ICU room. He explained Lindsey was ill with what they were assuming was H1N1 and though it would take a few days for the lab to confirm it, they were treating him as if he had it. He told us a friend had brought Lindsey to the hospital's emergency room the night before and his condition had deteriorated rapidly.

"Within a couple of hours, he could no longer breathe on his own. We put a tube down his throat so the ventilator can do that work for him. He was conscious long enough for us to explain it and now we will keep him deeply sedated so his lungs can accept the help. We're giving him antibiotics to fight the H1N1, as well as fluids to hydrate him."

He was also running a high temperature, so he was getting anti-inflammatories, and just before we arrived, they had put him on a bed of ice and removed his gown, leaving a small towel across his front.

"Are you ready to see him now?" the doctor asked.

We put on gowns, gloves, masks and eye shields and the doctor slid open the heavy glass door.

There was my son stretched out on a bed, his head slightly elevated. In addition to the breathing apparatus covering his mouth, I counted nine tubes and lines attached to his body. His eyes were closed and he was very, very still. The only sound in the room, after we closed the door, was the artificial hissing of the ventilator.

I approached the bed and tried to blink back the tears that were blurring my vision. I wanted to take his hand, but both of them had medical apparatus attached. I stroked his arm and whispered to him. He didn't respond.

Confirmed a few days later with both H1N1 and influenza A, Lindsey lay paralyzed for more than two weeks, occasionally twitching or opening his eyes, but for the most part uncannily still. Once he squeezed my hand. It may have been just a reflex, but the nurses told me he could hear, so I chose to believe he knew I was there.

He didn't like it when the nurses shaved him and no matter how gentle they were, he groaned and tried to turn his head. I put lotion on his hands, feet and forehead, wiped his dry, cracked lips and made sure his blankets were tucked in after the fever broke. I became adept at one-sided conversation. I sang songs from his childhood, recited poems and read passages from a prayer book.

Because of the dangers of infection and contamination in the ICU - especially with H1N1 - the usual hospital comforts of pictures, flowers and books were forbidden, but I smuggled in a photograph of Lindsey with me and his grandmother at his graduation.

Visitors were restricted to family only, so his grandmother and I took turns by his bedside. After the initial shock, it was amazing how swiftly we adapted to the routine of going to the hospital, gowning up, reviewing his status with the nurses, asking about his fluids and medications and sitting with him. We talked about him and talked to him, but often just sat watching him, willing him to live.

Time stands still in the isolation of the ICU; you snatch sleep where you can and yet still feel disoriented and often terrified.

After almost three weeks of this suspended animation, the doctors explained they needed to make a decision about Lindsey's care: whether to keep him sedated or try to bring him off the ventilator to see if he could breathe on his own. If he couldn't, they would do a tracheotomy and put the ventilator tube through a hole in his throat.

When I entered the ICU the next day, I was greeted with big smiles. "I have an early Christmas present for you," the attending doctor said. He walked me down the corridor and with a flourish pointed to Lindsey's room.

There was my son, sitting up, the ventilator tube removed. His eyes were open wide, and though he looked dopey, he was smiling. He saw me and his grin widened.

I laughed, I cried and my hands shook as I struggled through the gown and gloves routine. My son was awake. Everything was going to be okay. 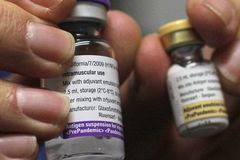 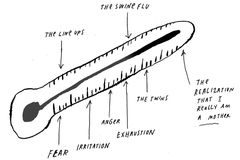 Facts & Arguments
Life in a time of germaphobia
December 7, 2009 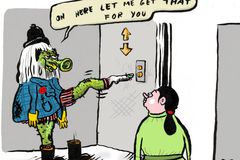