Federal Health Minister Jane Philpott has committed to reducing tobacco use among Canadians to less than 5 per cent by 2035, telling an audience Wednesday at the National Forum on the Future of Tobacco Control in Canada that "preventing a new generation of smokers is a priority."

"This is a pressing public health matter – there's no question about it," Dr. Philpott said in her keynote address, adding that the government is prepared to take an aggressive approach to meet the ambitious target.

According to Health Canada, 4.6 million Canadians (about 13 per cent) currently use tobacco, with 115,000 picking up the habit in 2015 alone. Smoking rates among youth and young adults haven't changed since 2013 – a major concern considering that more than 80 per cent of current smokers had their first cigarette by the age of 18. A Canadian dies from a smoking-related illness every 14 minutes. The government forecasts that if tobacco use continues on its current course, smoking rates will dip to 9 per cent by 2036.

So what will it take to bring that down even further, to less than 5 per cent, by 2035? Here's a quick primer on what's being done, what proposals might be on the table – and what challenges stand in the way.

The country's national tobacco control strategy is set to expire next March. The government convened the National Forum on the Future of Tobacco Control in Canada this week to look at new and aggressive steps to reach the ambitious smoking-reduction target across the country. According to a consultation document released by Health Canada last week, all kinds of policy options are being considered, including raising the minimum age for the purchase of tobacco products to 21; developing regulations to reduce the addictiveness of tobacco products; and banning smoking on postsecondary campuses, in parks and in multi-unit apartment buildings. The government said it's also looking at ways to help people quit or reduce their use of tobacco products, possibly through a shift to less harmful products such as e-cigarettes. The consultation document is open for public comment until April 13.

The explosion in the use of e-cigarettes in recent years created a significant new challenge for the government. Currently, e-cigarettes that contain nicotine are unregulated and not approved for use. But they are relatively easy to get, and health experts warn that young people will use them as a gateway to smoking cigarettes. The 2015 Canadian Tobacco, Alcohol and Drugs Survey found that 13 per cent of young people 15 and over said they had tried an e-cigarette, up from 9 per cent in 2013. Last year, a study in the Canadian Medical Association Journal found that 10 per cent of Grade 9 students in one Ontario region had tried e-cigarettes, calling them "fun" and "cool."

While the former Conservative government faced calls for several years to legislate e-cigarettes, also known as vaping products, it did not take action. Last November, the Liberal government introduced a new Tobacco and Vaping Products Act that would finally set rules for how the products can be used in Canada. The proposed legislation would ban the sale of e-cigarettes to those under 18, prohibit the use of candy, fruit or other flavours in e-cigarettes that could appeal to young people, and allow the government to introduce health warnings on product labels, similar to those in place for cigarettes.

However, the government also says it realizes vaping products can help some smokers by giving them a less toxic option than cigarettes, so adults would be able to purchase vaping products under the new legislation. Health Canada says it's working with the Canadian Institutes of Health Research to study the health impacts of vaping products in order to make evidence-based policy decisions.

One of the hallmarks of the government's new approach to tobacco control is the decision to introduce plain packaging for tobacco products. The proposal would prohibit tobacco products from carrying any brand logos or colours. Research from Australia, where plain packaging has already been implemented, shows it can help deter young people from picking up the habit.

Tobacco companies have mounted a campaign opposing the move, suggesting it would keep important product information from consumers, fuel the market for contraband tobacco or simply fail to work. Several think tanks and advocacy groups have also come out swinging against plain packaging. Coincidentally, they all have financial ties to the tobacco industry.

The federal government is in the process of introducing new rules to ban menthol from cigarettes, little cigars, most other cigars and blunt wraps – tobacco leaves used for rolling. Tobacco control advocates have spent years questioning why Canada has allowed menthol to be used as a flavouring agent in tobacco products and say the move is a long overdue step in the right direction. According to Health Canada, research shows many young people smoke menthol cigarettes, which can help mask the harsh taste of the tobacco.

The challenges and next steps

Rob Cunningham, senior policy analyst at the Canadian Cancer Society, says the federal government's ambitious agenda harkens back to the early 2000s, when Canada was a world leader on the tobacco control stage through its leadership on graphic health warnings and other initiatives. The proposal to reduce tobacco use rates to below 5 per cent by 2035 is "doable," Mr. Cunningham said, but it will take a firm commitment and ample funding. Certain groups – those living in rural or remote areas, people with mood or anxiety disorders and Indigenous people – are highly prone to using tobacco products, so specific policies need to be created to figure out how to tackle this.

Overall, Mr. Cunningham says he's encouraged by what he sees at the federal level and believes the suite of proposed changes on the table will help Canada reassert itself on the tobacco control file.

"Canada should again be the world leader – and there's no reason why we can't," he said. 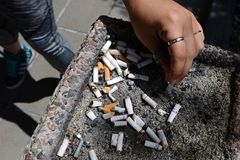