After years of pumping weights and pounding the treadmill in the gym, Jennifer Boksa decided it was time for a change of pace. So she signed up for a yoga class in January and since then has been regularly practicing her asanas and pranayamas - yogic poses and breathing techniques.

"I was starting to get injuries from my gym workouts," says Ms. Boksa, a 40-year-old resident of Georgetown, northwest of Toronto. "Yoga feels like something I can sustain as I get older."

Once viewed largely by North Americans as a New Age fad, yoga is now part of the fitness mainstream in Canada, with classes offered in hundreds of gyms and boutique yoga studios throughout the country. This ancient practice - believed to have originated more than 5,000 years ago in South Asia - is based on three main components: exercises that put pressure on the body's glandular systems, breathing control techniques, and meditation to quiet the mind.

Combined, these three components add up to a practice that gradually increases the body's efficiency and improves overall physical and emotional health - all without the pain typically associated with gym workouts.

"Yoga gets you out of this competitive mode of thinking that you have to beat your body into shape," says Heather Morton, owner-instructor at the Yoga Way in Toronto. "Unlike going to gym, which is like a chore for most people, yoga is something that you want to do, something you look forward to doing for yourself."

Angela Alchesi, a yoga instructor at the Yoga Sanctuary in Toronto, says people often equate yoga with pretzel poses and other seemingly impossible body contortions. As a result, some think yoga is only for the young and elastic.

"You're never too old to do yoga," says Ms. Alchesi, who teaches a "senior's yoga" class where the youngest student is 55, and the oldest is 85. "In fact, as you get older and your body is no longer able to take those punishing workouts, you'll find yoga to be the perfect practice."

Patrick Winogrond, a teacher at Salt Spring Centre for Yoga in British Columbia points to a number of classes he teaches "where I don't think there's anybody without grey hair in the group."

Whether you're 16 or 65, you can do yoga, says Mr. Winogrond, who teaches Ashtsanga, an advanced and more challenging form of yoga.

But while yoga is suitable for older youth and adults of all ages - the American Yoga Association [www.americanyogaassociation.org]doesn't recommend yoga for children - those who are less limber and physically fit should take precautions to avoid getting hurt, according to the experts.

Maureen Vohora, co-owner of iGita Hot Yoga Club, Spa and Boutique in Oakville, just west of Toronto, says it's a good idea to start in a beginners' class, which are less demanding physically and focus more on learning basic yoga poses.

If a studio doesn't offer a beginners' class, Ms. Vohora suggests letting the instructor know you're new to yoga and discussing your physical limitations. This way, the instructor is likely to suggest ways to modify poses to make them easier and safer for newbies.

"Be sure to disclose all health problems," says Ms. Vohora. "If you were in a car accident five years and had a neck injury, or you have ongoing back pain, you need to tell the teacher."

Ms. Alchesi at the Yoga Sanctuary suggests using props such as wooden blocks, cushions or straps, which can all help those with limited flexibility execute poses without straining themselves too much.

"And perhaps the most important thing to remember is that, at any time, you can just sit out a particularly challenging movement or pose and just go into [a resting pose]" she adds.

"The right type of yoga practice can heal injuries," he says, "while the wrong type can make it worse."

For example, hot yoga would be helpful for someone with scoliosis, a condition where the spine is abnormally curved, says Mr. Panwar. Yoga classes that involve a lot of floor work - where students lie on the ground - and side bends are also good for scoliosis, he adds.

With so many different types of yoga in practice - more than 100, according to the American Yoga Association - finding the most suitable one can be a challenge. Ms. Morton, who practices a type of yoga called Atma Vikasa, says the best thing to do is to try different classes and see which one feels right.

"Once you find a yoga you believe in, stay with it and take it as far as you can before gradually moving on to try something else," she says. "Otherwise, you just end up dabbling too much."

In the end, all yoga yields the same fundamental benefits, she says.

"Yoga is all about liberation and breaking the conditioning of the body and mind to make us stronger physically and spiritually," she says. "The various types of yoga offer us different paths, but they all lead to the same place."

The different paths of yoga

There are more than 100 types of yoga in practice today. Most draw from the same pool of poses and breathing exercises, but differ in sequencing and in their emphasis on certain things, such as breathing, duration of each pose, and the temperature of the yoga studio. Here's a quick glimpse at a handful of these yoga practices:

Ashtanga - This advanced form of yoga synchronizes breathing with movement - with one breath for each movement - to produce intense internal heat and detoxify muscles and organs.

Iyengar - With a strong focus on proper body alignment, Iyengar uses props such as blocks, belts and wooden gadgets to help practitioners who lack the flexibility to execute poses properly, or who can't hold the poses for the prescribed period.

Restorative - Like Iyengar, restorative yoga uses props but adds cushions and bolsters for added support. The focus is on helping the body relax through a series of resting poses.

Hot yoga - This class of yoga, which includes Bikram and a Bikram offshoot called Moksha, is performed in a studio that are temperature-controlled to reach certain levels of heat and humidity. This warms and loosens the muscles, making it easier to execute poses. The profuse sweating in hot yoga also helps rid the body of toxins.

Vinyasa flow - Also referred to as power yoga, vinyasa yoga connects movements so that each flows into the next. The movements are performed in sync with breathing techniques. Vinyasa flow is similar to Ashtanga but not as advanced, making it suitable for those with health concerns. 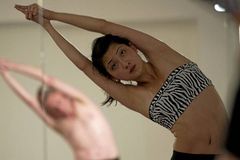 The longer you practise yoga, the happier and healthier you'll be
May 29, 2011 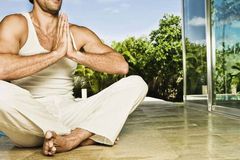 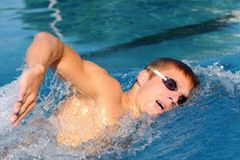