When dining out, it's an impossible guessing game to know how many calories, how much fat, or how much sodium comes with your order. Most people don't know, or grossly underestimate, what they're consuming.

Who would think that Boston Pizza's regular-sized Greek salad has 1,040 calories and 1,960 milligrams of sodium? That's half your daily calorie requirement and more than a day's worth of salt. Compared to other items on the menu, it sounds fairly healthy.

And who knew that a slice of Starbucks's lemon-poppy-seed loaf delivers 410 calories? Along with your Grande non-fat latte, that's a pretty darn hefty snack (total 540 calories).

Of course, some folks don't care. That's fine. But many people do, and think they have a right to know what's in their food so they can make an informed choice.

A handful of U.S. cities including New York; San Francisco; Seattle; Portland, Ore.; and Philadelphia have passed menu-labelling laws for chain restaurants in an effort to curb obesity.

So far, research suggests that calorie information on menus in New York -in effect since July, 2008 - does change habits. Preliminary data from the city's department of health reveal that among 12,000 customers surveyed this year, 56 per cent reported seeing calorie information, and 25 per cent of those acted on it and ordered lower-calorie items.

An earlier study from New York University and Yale University found no change in habits after the New York law went into effect. But that study was conducted in low-income neighbourhoods, where people are more concerned about cost than calories.

While Health Canada has created strict labelling guidelines for packaged foods, critics decry the lack of nutrition information in restaurants.

In 2007, a bill calling for improvements to nutrition labelling was defeated. It would have required that menus disclose calories and levels of saturated and trans fat, as well as sodium.

Earlier this year, the Ontario Medical Association called for the posting of calorie counts on chain-restaurant and school-cafeteria menu boards across the province.

Yet nothing much is happening in Canada. While fast-food restaurants and some full-service chains voluntarily provide nutrition information in brochures and online, diners often don't have access to it when they need it: when they're placing their order.

Personally, I think posting calorie counts on menus is a good thing. The information is needed more than ever with half the adult population overweight or obese, and one-quarter of our nation's kids in the same boat.

Studies have shown that people who dine out tend to consume more calories than those who usually eat meals prepared at home.

I am not saying that posting calories will solve our obesity problem. But knowing this information - and putting it in the context of your daily calorie needs - is one step toward making it easier for Canadians to make healthier choices.

Would knowing this information sway your order? I think it might. The chart accompanying this article provides a snapshot of what you'd see on menus at your local coffee shop, food court or full-service restaurant chain. (Some of the "lighter" choices can still have more calories and sodium than you need. When dining out, order the smallest portion - or share an entree.)

How accurate are calorie counters?
October 25, 2010 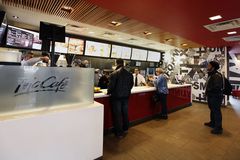 I count every calorie I consume. Is there anything wrong with that?
May 4, 2011 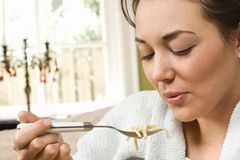 Follow Leslie Beck on Twitter @lesliebeckrd
Report an error
Due to technical reasons, we have temporarily removed commenting from our articles. We hope to have this fixed soon. Thank you for your patience. If you are looking to give feedback on our new site, please send it along to feedback@globeandmail.com. If you want to write a letter to the editor, please forward to letters@globeandmail.com.
Comments