TORONTO — An organization dedicated to supporting younger women with breast cancer is calling for a national standard of care for this population, whose severity of disease and treatment can differ significantly from their older counterparts.

In a report released Thursday, Rethink Breast Cancer said women aged 20 to 45 across the country should also have access to nurse navigators to help them through the process of diagnosis and treatment, while putting them in touch with community resources aimed at helping them deal with issues particular to their age group.

Results of a survey of 574 young Canadian women diagnosed with breast cancer or a recurrence of the disease found many have more difficulty than older women navigating the health-care system, finding women their own age with the disease — less than two-thirds were able to make this connection — and getting proper referrals for fertility preservation.

"They feel that their concerns are maybe not taken as seriously by health-care providers," said M.J. Decoteau, executive director of Rethink Breast Cancer, which she founded 12 years ago. "We heard time and time again of young women (being told) 'Oh, you're too young to have breast cancer. We'll keep an eye on it. Don't worry about it."'

In extreme cases, it took two to three years for some women to get diagnosed, said Decoteau, who was 22 when her mother died at age 48 of aggressive breast cancer.

Once diagnosed, many younger women have difficulty making their way through the process of treatment, she said.

"Part of it is they maybe just don't have the life experience of someone in their 50s or 60s. So they're thrown into this upheaval at a very young age, trying to figure out what the doctor is saying. 'How do I get to treatment? What are all the things that are happening to me?"'

One of the issues emphasized in the report is that younger women often have an aggressive form of breast cancer, which results in more intense treatment and increased side-effects, said Decoteau, who co-authored the report.

"So it's just that combination of having your life turned upside-down at a time when you're just really trying to find your footing and get started that makes it extra hard for these young women both to navigate the health-care system and also to deal with picking up their life post-treatment."

Decoteau said the report's authors were shocked that half of the young women facing treatment for breast cancer and concerned about having children later were not sent to a specialist to discuss options for protecting fertility, such as preserving their eggs. Chemotherapy can destroy a woman's ability to conceive.

"That's an example of something we'd like to see in a standard of care, so it just becomes a part of protocol."

Katie Evans of Ottawa was 26 when she learned she had breast cancer, but it took seven months to get that diagnosis.

Now 28, Evans found a golf ball-sized lump in her right breast. Her doctor told her that although it shouldn't be ignored, it was probably nothing to worry about because of her age and having no family history of the disease.

She had a number of ultrasounds, but it wasn't until Evans was sent for a mammogram and subsequent biopsy that she got confirmation that the lump was malignant. It has also spread to one of her lymph nodes.

"I felt as though if I had been 55, I would have been diagnosed within the first month," Evans said from Ottawa, where she is an administrator for a drug-store chain. "My age definitely had an impact on my delayed diagnosis."

Evans said it was hard to know where to turn. She felt alone.

Any pamphlets explaining breast cancer, its treatment and advice on getting through the experience all had photos of older women on their covers, she said.

"My friends are having children and planning weddings and I'm stuck in a hospital getting chemotherapy for a disease that is known as your grandmother's disease."

She didn't go to breast cancer support groups because there were no other young women in the groups and her issues were so different from those of the older women attending.

Evans, who is engaged to be married, was referred to a fertility specialist before starting treatment, but decided against preserving her eggs because the drugs needed for harvesting them could fuel her estrogen-positive breast cancer. She now has a 40 per cent chance of conceiving.

"I probably cried more about that than I did when I heard I had cancer," said Evans, who chose to have a mastectomy, which was followed by six gruelling rounds of chemotherapy.

Even dealing with the aftermath of her breast removal left her feeling disconnected from other women with the disease.

"My mom and I would go shopping for mastectomy bras and they would always go to her first and then she'd say, 'No, we're here for my daughter.'

"Isolated, I think, is the best way to describe it." 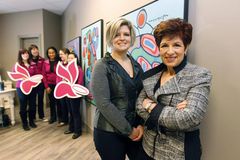 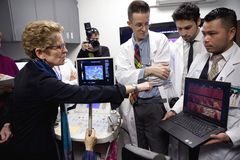