Fred Gitelman made headlines this month after the Toronto native and his team won the Rosenblum Cup, the premier event at the World Bridge Championships, one of the biggest bridge tournaments in North America. Total cash purse? Zip. Nada. Nothing. The vast majority of bridge tournaments, in fact, don't offer cash prizes. But top players such as Mr. Gitelman can rake in large sums thanks to well-heeled players who pay to sponsor them to be on their team.

"Bridge is an unusual sport to some extent in that you can somewhat buy your way into a highly competitive team," says Geoff Hampson, a Canadian-born professional bridge player who lives in Los Angeles and was on Mr. Gitelman's winning team. "It's all a matter of appearance fees that are contributed typically by wealthy individuals that you have an ongoing business relationship with who have the money to sponsor a team or a pair to play with them."

Mr. Hampson, one of the top professionals in the United States, says that typically there is one person paying five other people to comprise their six-person team (the extra players are there to allow substitutions throughout a tournament). "In my case, bridge is all I do for a living. So if somebody, even a really, really good player, wants to play with me, I have to make a living. So I'm going to need to get paid," the 42-year-old says.

Just who these patrons are remains a bit of mystery. But one thing that can be said for sure is that they have plenty of money, a passion for bridge and a keen interest in shelling out for the bragging rights of winning tournaments.

"There are a large number of millionaires, billionaires, multimillionaires who play bridge. And they're delighted to hire professional players as partners and as teammates," says Michael Gold, online manager of Bridge4Money.com, a British-based website.

It's not unusual for a sponsor to pay anywhere from $200,000 to $250,000 to put a team on retainer for the year, says Janice Anderson, executive assistant at the Canadian Bridge Federation.

"They'll hire them with the understanding, 'Okay, you're going to play at the world championships with me. We're going to play the three North American championships and maybe one or two other tournaments,' " she says. "It would not be unusual at a high-level event for one of the top players to be making close to $1,000 or more a day with all expenses covered."

For single tournaments, professionals can command fees of anywhere from $8,000 to $50,000, says Gavin Wolpert, 28, a Toronto-born professional bridge player who lives in Jupiter, Fla.

Many sponsors are very good bridge players in their own right who, along with the quest for glory, want to rub shoulders with the best in the game.

"It gives them a chance to sort of hang out with, get to know and become friends with the best players," Mr. Gitelman says. "For some sponsors, the social aspect is very important."

Becoming a professional player is usually a matter of developing a reputation within the bridge community. Players will start at their local bridge club, work up to sectional tournaments, move on to regional tournaments and then, depending on their skills, to national tournaments, says Jonathan Steinberg, a Toronto-based bridge player and a member of the executive council of the World Bridge Federation.

"You just sort of climb your way up the ladder," says Mr. Hampson, who plays in about 20 tournaments a year.

Mr. Gitelman only plays in about four or five tournaments each year. The rest of the time he devotes himself to the bridge-related software company he runs with his wife.

"It's not just about your ability. You have to be entertaining and have to have good team spirit and people have to want you on your team. Obviously there's a prerequisite of being a great player," he says. "But there's still enough choice in the market that if people don't like you, you're not going to get work," he says.

Mr. Wolpert estimates that there are only about 100 professional players in the world who make their living solely playing in top-level competition.

"There's a few dozen players in North America who are certainly making a six-figure income each year," Mr. Gitelman says.

There are several thousand professionals in the world making their living playing in smaller tournaments, he says.

Some professionals will supplement their income by teaching or with other side projects. For instance, Mr. Wolpert runs Bridgewinners.com, a news and education site.

While there has been controversy in the past over players being able to hire pros to play with in tournaments, it is now mostly accepted practice, Mr. Wolpert says.

"Over time, I'm sure there's been a lot of people who don't like the idea of being able to hire a good team and compete. But really bridge has only been able to advance the way it has because of it. There's no corporate sponsorship. It's not a televised game. This is the only way for players to devote their lives to the game," he says.

Most amateurs, by contrast, aren't in the game for money, Mr. Steinberg says. But their goals are much the same as the sponsors shelling out for professionals.

"People play for the prestige, the ego, the honour," he says. 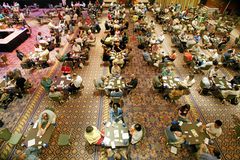