Who can't relate? It's hard not to feel like a sucker when big-box stores are casually suggesting that two Christmas trees is the new normal and lady mags command you not just to send cards but to make them yourself with glitter glue and stencils.

Yes, Christmas is stressful, commercial, oppressive. According to the "holiday tree" lobby, it's also kinda racist.

But non-Christmas is worse.

The annual exchange of a card or gift is fraught with potential tension. In his 1967 essay The Sociology of Gift Giving, Barry Schwartz writes: "Gifts are one of the ways in which the pictures that others have of us in their minds are transmitted." This is precisely why it's so horrific when you open a sparkly box to find anti-aging skin cream or a pair of handerpants (contenders in the Worst Gift Ever contest on the British shopping website 15gifts.com). When you think of me, you think of fingerless gloves that look like tighty whities? Really?

For cynics, the ritual of holiday exchanges is an act of social warfare. Christmas resisters believe that cards and gifts reinforce social status and are designed to make us feel bad about our inevitable failure to reciprocate. It's the evil "gratitude imperative" dressed up with a cute Rudolph nose.

But if gifts and cards are a way of imposing identity, they're also a way of asserting identity, by saying: This is who I am, and I am thinking of you. Those who have given up on Christmas cards will say that we are already connected all the time and that there's no need for an annual update when Facebook allows us to see someone's vacation photos minutes after they jump in the pool. Plus, who knows anyone's address any more?

Recently, however, a Harris/Decima poll for Canada Post found that nearly 90 per cent of Canadians between the ages of 18 and 24 (that age group that's supposed to be sub-literate) prefer receiving hard-copy Christmas cards to e-cards; 75 per cent of Canadians are expected to mail an average of 20 cards this year. Perhaps this traditional nostalgia reflects a general feeling that cards are even more imperative in the e-age. Of 893 Facebook friends, probably only a dozen truly matter and are beloved. Separate the wheat from the chaff and give those ones a card (or a gift or a poem or a knock on the door – some kind of Non-Electronic Holiday Gesture).

Emerson wrote that a gift should be "a portion of thyself: Therefore the poet brings his poem; the shepherd, his lamb; the farmer, corn … This is right and pleasing, for it restores society in so far to its primary basis, when a man's biography is conveyed in a gift." This is not so simple circa 2011 – the accountant gives the … spreadsheet? The waitress gives the … salt? – but the one thing we do have that is purely ours is time. Our biography is conveyed by what we do with it and how much of it we give away to the people we love. The problem with e-cards is that that they bypass the actual labour of the NEHG; the minimal gesture of a handwritten signature isn't even required, let alone the walk to the mailbox.

Conversely, it's possible, because we're so electronically transparent, to know who's Tweeting every 20 minutes or updating his profile daily. This works as evidence against any ensuing excuse about not having had time to lick an envelope.

There is, of course, the environment. If the environment is preventing you from participating in the holidays, then make something out of your beer bottles and drop it off by foot, preferably shoelessly – oil in the soles! Mother Earth doesn't like it when you hide behind her; she knows it's laziness, not love.

Looking back, those non-Christmases were fine experiments. I was happy to bypass the crassness of the debt-addled, socially tense holiday. But an entirely resisted Christmas lacks optimism. It's hardly a holiday without good wishes in some shape or form, those reminders of who and what matters, received and sent.

My holidays include family - glorious warts and all
December 23, 2010 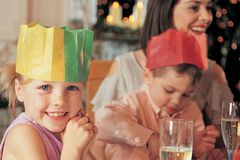 The year I hallucinated the Christmas presents
December 23, 2010
Follow us on Twitter @globeandmail Opens in a new window
Report an error Editorial code of conduct
Due to technical reasons, we have temporarily removed commenting from our articles. We hope to have this fixed soon. Thank you for your patience. If you are looking to give feedback on our new site, please send it along to feedback@globeandmail.com. If you want to write a letter to the editor, please forward to letters@globeandmail.com.
Comments