Sukhi Ghuman has a secret. The homemade holiday biscotti and shortbread she's been passing off as her own? She didn't make them.

Ms. Ghuman's husband, a professional chef, is the one who carefully researched the recipes, bought the ingredients and prepared the treats so she could bring them to parties and share them with friends and co-workers.

If anyone asks how she made them, Ms. Ghuman has an excuse ready so she won't blow her cover. "I'll say these are secret family recipes that have been passed down for generations," she laughs.

The Surrey, B.C., resident is an admitted fake baker, and she's far from alone. People who are too busy or inept to do their own baking are finding creative ways to cheat their way through holiday bake sales, potlucks and cookie exchanges by using packaged mixes, roughing up store-bought items, or relying on the help of more highly skilled bakers.

Sure, it's dishonest to take credit for something you didn't make, fake bakers concede, but there's more pressure than ever for people to bake their own holiday goodies.

It's being fuelled in part by a renewed popularity for all things homemade, according to Jessie Oleson of Seattle, who writes the dessert blog www. CakeSpy.com.

"I think people have started to look at things like food that's not homemade as kind of the enemy, or not having enough care put in," she said.

On top of that is an enduring cultural expectation of women.

"Generally, society feels that women should take time out and do Christmas baking," Ms. Ghuman said. "But nowadays, with busy schedules, work and kids and balancing family life, you just don't have time to bake."

Michelle Lamar, a Kansas City mother of two and co-author of a slacker's guide to domestic perfection titled The White Trash Mom Handbook , regularly passes off store-bought goods as her own at school parties and bake sales.

She keeps a plate and decorating supplies on hand for emergencies, when she needs to refashion supermarket brownies or cookies on the way to a school function.

"Literally, I'm in the grocery-store parking lot, dumping the brownies off and putting them on the plate and cutting them," she said, adding she's not above writing the school's initials on top with squeeze-tube icing to disguise them as homemade.

There's an unwritten rule that mothers should never bring store-bought items to school events, she explained. While she acknowledged it might sound ludicrous, failing to do so elicits whispers and looks of disapproval from other parents and teachers.

"Your motherhood is judged in line with your baking skills," she said. "Our culture is still under the illusion that there are perfect mothers. … If you're not all that, you're a failure."

Asked whether men are subject to the same pressure to fake bake, Ms. Lamar scoffed. "Are you kidding? Dads are like heroes if they do anything."

Ms. Lamar said her children, aged 11 and 16, are in on her scam, which is really intended to fool other adults.

"They [the children]know all about it and they just roll their eyes, basically - the teenage eye roll, it's classic," she said.

Ms. Oleson has her own tips for faking it, which she noted on her blog earlier this year. Techniques include scraping the bottoms of store-bought cookies with a serrated knife and browning them in a frying pan to make them look homemade, or smearing the frosting on bakery cupcakes so they look less professional.

Too-perfect store-bought pies can be rectified by making gentle indentations in the crust with the bottom of a spoon after briefly reheating the pie in the oven, she wrote.

She also offered responses to deal with inquiries about recipes, such as "I found it on a blog … and forgot to bookmark it," "I'll e-mail you the recipe," and conveniently forget to do so, and, "That's weird - they do taste just like that bakery's (insert baked good here)! Excuse me," before beating a hasty exit.

"I tend to believe that what people don't know won't necessarily hurt them," Ms. Oleson said.

But she noted she would never be cheeky enough to follow through with her own advice, lest her reputation among fellow foodies be tarnished. "I think the repercussions would be swift and harsh."

In Langley, B.C., pastry chef Tina Bacon, owner of The Pink Spatula bakery, suspects that buyers of her ready-made gourmet cookie dough often take credit for the finished product. It doesn't bother her, though, since her customers do the baking themselves, and she knows the ingredients are of high quality and don't contain artificial additives.

But she is appalled when people bring squares to parties that have obviously been bought from Starbucks, then cut up and presented as homemade; or when less-than-scrupulous professional caterers serve desserts purchased from Costco.

"It's pretty widespread," Ms. Bacon said of the practice. "As a baker … I personally find it a bit disappointing to show up at a potluck or at a Christmas party and have something purchased there. I don't know. That's just me. I want the good stuff."

How to fake it

Perfectly shaped cookie edges and flawless icing are the tell-tale signs of store-bought baked goods, according to Jessie Oleson, blogger of www. CakeSpy.com.

If you're going to fake it right, fake bakers suggest the following tricks:

Dip packaged cookies in melted chocolate to hide mechanically shaped edges, or disguise them under a coating of (sloppily applied) frosting and shredded coconut.

Cover the too-smooth surface of a pumpkin or pecan pie with a generous topping of whipped cream and an imperfect sprinkling of cinnamon or nutmeg.

Use a butter knife to smoosh perfectly piped frosting, but make sure it's soft so it doesn't get crumbs in it.

Re-cut the edges of store-bought squares to make them look just a little jagged.

Facts & Arguments
I discovered my inner baker. Sadly, so did my waistline
January 11, 2011 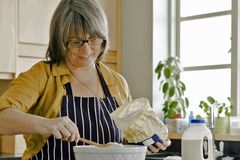