The animated holiday shop windows garnished with tinsel and fairy lights are beckoning shoppers from coast to coast – some with sparkle, some with sales flyers and red-tag deals. Depending on the kind of consumer you are, you are either beguiled by it all or think that – whatever the wrapping – it's all crass commercialism.

Every year, there seems to be some new manifestation of this great divide, framing our recurring conversation about the debasing of Christmas. In the United States, the fact that the holiday retail season, traditionally kicked off by Black Friday, is starting even earlier has raised anti-capitalist hackles: This year, Americans needn't even wait until Nov. 28 to get their deal on because certain retailers, including Kmart, Toys "R" Us and J. C. Penney, will be opening on Thursday, American Thanksgiving itself. Who needs seconds of turkducken when there are half-price TV sets to be had?

Pretend as we might that we're loftier of mind in Canada, the Black Friday phenomenon crept north of the border in the wake of the 2008 economic downturn and was in full swing by 2012. Indeed, a new IPG Mediabrands consumer study has it that about 2.8 million of us are planning on taking a vacation day to shop on Black Friday this year; by comparison, the number of Canadians who have never heard of Black Friday (or Cyber Monday, its hair-of-the-dog followup) continues to dwindle, down to just 7 per cent.

Whether one's preference runs toward eggnog or coal, the seasonal juggernaut is inescapable – even in Britain, where the same economic downturn has inspired a newly spiritual spin on the selling of Christmas. There, though, the adverts about family, love and peace being the true meaning of the season are as high-gloss as any fragrance ad, feature celebrity cameos and musical performers and generate as much chatter as Taylor Swift album analysis. The department-store chain John Lewis, for instance, spins the tale this year of #MontyThePenguin, a fluffy stuffed bird (or is he real?) belonging to a boy named Sam. Having spawned a children's book and a storytelling app, Monty is less a pitchman than a brand unto himself. The ad's theme song (John Lennon's Real Love, covered by Tom Odell) is available on iTunes.

"Christmas is bigger than the 25th of December," Burberry CEO Christopher Bailey told Bloomberg during the big reveal of that brand's holiday windows at Printemps department store in Paris. "It's really about celebrating and storytelling again." That's his story, anyway. Burberry may prefer to call its big commercial "a festive film," but the British heritage brand's campaign has built a multiplatform experience around it, one that includes shopping directly from tweets.

Granted, the Burberry commercial is good-looking, as lush as Baz Luhrmann's recent short film for Chanel No. 5 and more like a golden-age Hollywood musical than a plug. In the spot, a handsome young man (in a tan trenchcoat, natch) dances with his shadow, who turns out to be posh 12-year-old soccer scion Romeo Beckham. Everyone carries umbrellas and branded parcels tied with a bow. Who knows what goodies the boxes contain? Who cares! What matters is that, throughout the routine (think Singin' in the Rain choreographed by Busby Berkeley on a Vincente Minnelli set designed by Maison Martin Margiela), the gilded logo catches the light and dissolves into golden glitter CGI. After such spectacle, how can we begrudge the brand the sale of a few more Nova Check scarves?

Over at the British grocery chain Waitrose, meanwhile, the narrative involves a teenage girl's failed attempts to bake gingerbread for her class's holiday fair and the kindly sales associate who helps her, all set to a rendition of Dolly Parton's Try. At Boots, the hashtag and theme is "SpecialBecause." In its rather moving commercial, extended family in various parts of a town travel in the dead of night to surprise the family matriarch as she returns home from an overnight work shift.

The award for the most shameless display of sentimentality (the one universal language bigger than a bargain) has to go to the supermarket chain Sainsbury's, however. It has gone and invoked the First World War, recreating a famous moment called the Christmas Truce: Enemy soldiers, shivering in their respective trenches, mark Christmas Eve by harmonizing Silent Night together before an unofficial détente in no man's land the next day. By the end of the spot, there is nothing for it but openly weeping for humanity. As affecting as it is, though, it could actually be counterproductive as an ad. After all, what monster could possibly think of shopping at a time like that?

For every dehumanizing trip I made to the mall last year, I watched John Lewis's animated (and irresistibly sweet) The Bear and the Hare commercial 10 times. The undisputed hit of 2013's warm and fuzzy holiday-advert lineup, it also provided a real sales boost: According to financial reports, that non-commercial commercial about the magic of friendship, caring and sharing of oneself improved the retailer's holiday bottom line by 6.9 per cent. In other words, the dusting of glitter and make-believe is as effective a means to the same economic end as opening on Thanksgiving Day. It is just a subtler and more captivating approach.

Nathalie Atkinson: Now lurching toward a runway near you, the catwalking dead
November 13, 2014 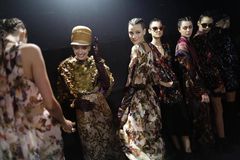 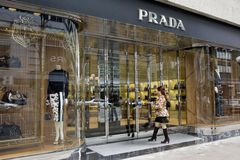 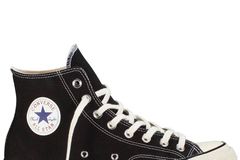