For many people, turkey is the main attraction of the holiday meal. And when it comes to nutrition, it's probably one of the most straightforward foods on the holiday menu.

It's packed with lean, filling protein and delivers plenty of B vitamins along with potassium, zinc and selenium. Yet despite its nutritional merits, misconceptions persist about the healthfulness of the holiday bird.

Before you feast on your holiday meal, take a moment to read the facts about turkey. The truth might surprise you.

Myth: Dark meat is much higher in calories than white meat.

If you think you're saving a lot of calories by choosing white meat over dark, think again. The small difference won't break your holiday diet.

Dark meat does have a few nutritional advantages over white meat, though. Ounce per ounce, it has twice as much B12 and selenium and three times more iron and zinc.

Dark meat contains myoglobin, a protein that carries oxygen to a turkey's active leg and thigh muscles. The more myoglobin, the more nutrients and the darker the colour. Since domestic turkeys are flightless birds, their breast muscles don't contain much myoglobin.

Both dark and white meat are an excellent source of protein, supplying 29 and 32 grams per 3.5 ounces, respectively. (You'd need to eat nine large egg whites to get 30 g of protein.)

If you like the crispy skin, it's not necessary to forgo it. Eating a 3.5 ounce serving of skinless turkey – white or dark meat – saves only 14 calories and two grams of fat. Big deal.

What's more, 60 per cent of the fat in turkey skin is monounsaturated, the type that's thought to improve blood-vessel function. Still, eating turkey skin isn't the same thing as eating an avocado or handful of almonds, excellent sources of the heart-healthy fat.

Myth: You should rinse your turkey before cooking it.

From a food-safety standpoint, rinsing turkey (or chicken or meat) is a definite no-no. Doing so can set the stage for cross-contamination and food-borne illness.

Water that splashes from rinsing a turkey can spread its loosely attached bacteria up to a metre surrounding your sink. That means that bacteria can mingle with other foods, serving utensils and anything else that's in the vicinity, including you.

The only way to destroy bacteria is to properly cook your turkey.

Myth: The turkey is done when the leg pulls easily away from the breastbone.

You can't judge if the turkey is done – or safe to eat – by how easily the leg pulls away, or if the turkey juices are no longer pink. Neither indicate that your turkey has reached an internal temperature that's necessary to kill off harmful bacteria such as Salmonella and Campylobacter.

Your turkey is done when an instant-read digital meat thermometer, inserted into the thickest part of the breast or thigh, reads 82 C (180 F). Stuffing, cooked alone or in the bird, should reach 74 C (165 F). To kill harmful bacteria, roast your turkey at or above 177 C (350 F).

Myth: Pass on the turkey gravy to save calories.

Sure, you'll eat fewer calories if you skip the gravy. But you're better off making other cuts to your meal if you want to save meaningful calories.

One-quarter of a cup (four tablespoons worth) of turkey gravy made with drippings, flour and water delivers 103 calories. That's considerably less than the butter spread on a dinner roll, whipped into potatoes and added to stuffing (120 calories every tablespoon).

If you like it, enjoy the gravy and, instead, skip the roll and butter (you'll get plenty of bread in the stuffing), add less butter and more milk to mashed potatoes and moisten stuffing with low-sodium chicken stock.

You've enjoyed your big holiday meal and now you're ready to take a nap. But don't blame your food coma on the turkey.

Turkey allegedly causes sleepiness because it contains tryptophan, an amino acid that the brain uses to form serotonin, a chemical that makes you feel relaxed. Serotonin is also used to synthesize the sleep-inducing hormone, melatonin.

But turkey contains many different amino acids and tryptophan is the least abundant. With so many other amino acids competing to enter the brain, tryptophan has a hard time getting in. To achieve its relaxing effect, tryptophan would have to be consumed alone and on an empty stomach.

You can, however, blame the potatoes, stuffing and shortbread cookies.

Consuming carbohydrates triggers the release of insulin, which shuttles amino acids, but not tryptophan, into body cells. That allows tryptophan to enter the brain and ramp up serotonin synthesis.

And let's not forget the booze. The sedative effect of alcohol can make you feel sleepy, too.

A make-ahead Christmas dinner your family will love
December 13, 2016 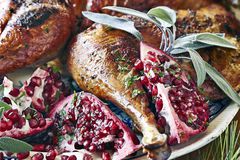 Six dos and don’ts for healthy holiday eating
December 3, 2018
Help for the holidays: Affordable wines under $20 (plus Champagnes that won’t break the bank)
December 8, 2016 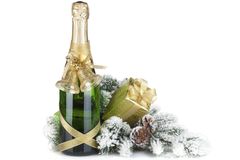