Most kids look forward to Christmas and the excitement of running downstairs to see what Santa has left them under the tree – dolls, trains, games, bubble bath.

When I was young I loved that part, too, but it didn't bother me when the actual day was over as there was another event I anticipated almost as much that took place between Christmas and New Year's.

It was the visit to my Great-Aunt Grace's stately house in Toronto's Forest Hill neighbourhood for afternoon tea. At first just my mother and me went, then when my brothers were of an age to sit mostly still on the couch they were allowed to come, too.

I loved the house's leaded windows and Persian carpets. The most beautifully decorated tree I had ever seen adorned the living room. It was covered in large, colourful lights set amid star-shaped tin reflectors. Atop each light sat fan decorations with blades that spun around from the heat. Little felt-and-wire Santas perched on the branches.

Underneath, spread out on cotton batting, was a miniature English village straight out of Charles Dickens, with lampposts, confectionery shops and tiny cottages. Chiming away on the coffee table were cherubs circulating over a tray of lit candles, their trumpets held aloft, ringing as they touched their bells.

Aunt Grace would pass around shortbread and serve my mother tea in a fancy cup, and for us ginger ale in little cocktail glasses. She would smoke while she asked us what gifts we had received, and what our plans were for New Year's. Then she would regale us with gossip from the neighbourhood.

Once the visiting was done, we would ask politely if we could see the toys. Aunt Grace's daughter Evelyn, who was in her 20s, would disappear upstairs and return with a box of the most unusual and captivating toys we had ever seen.

One by one she unwrapped them. We weren't allowed to touch, as she stressed that the only reason they had survived was that she didn't have any younger brothers or sisters to destroy them.

There was a tin ballerina with a long blue dress, her feet pointing down to a single tip. Evelyn would insert a metal blade into her side, then pull it out quickly, whereupon the ballerina would pirouette in a twirling frenzy.

There was a little crying boy in shorts with a terrier biting his behind. When he was wound up he ran all over, but could never escape that dog.

A bent-over bellhop in a blue-and-yellow uniform, when wound up, pushed a large trunk frantically around the room.

Donald Duck, made of heavy-duty plastic, opened and closed his mouth when offered a small box of magnetized corn flakes.

Then Evelyn flicked the pages of a Mickey Mouse flip book, a prize from a box of Cracker Jack. She explained that it was an early form of animation in which quickly flipping the pages made the images look as if they were moving.

But the toy that was the most intriguing was the gyroscope, a metal sphere with a wheel in the centre that moved independently from the outer circles.

Evelyn's father, Uncle Art, had given it to her when she was 14, the Christmas before he died. He had been the only one who knew how it worked, and she couldn't remember exactly how he had done it.

The Germans had used gyroscopes during the Second World War in their V-2 rockets and other navigational devices. Intrigued, we too tried to figure out how it worked, but to no avail.

Then the toys were packed away for another year.

As we got older, we didn't visit as often. Then Aunt Grace died of lung cancer. Evelyn stayed on in the house, and later, after my own two sons, Stephen and Peter, were born, I took them there every year I could, battling snowstorms and traffic.

The toys, showing signs of wear, remained as enchanting as ever. The boys learned to sit still through the demonstration as my brothers had. And they endured the explanation that the toys had remained intact because she didn't have any siblings to break them.

Until it came to the gyroscope. When Evelyn said she never could get it to work, Stephen jumped into action. A Lego and Capsela fanatic, he loved figuring out how things worked. She allowed him to take the string, whereupon he wound it tightly around the stem and threw the gyroscope onto the floor. It spun around the dining room for several minutes before collapsing on its side. We all watched, mesmerized, appreciating the powerful force of this tiny, magnificent toy.

Stephen received great accolades from Evelyn for finally figuring out how that toy was supposed to perform. And Santa gave him his own gyroscope for Christmas the following year (he is now working as an engineer!).

While in the process of downsizing, Evelyn considered selling her toy collection, but she decided not to as it held so many happy memories. I was secretly relieved, because I'm waiting for the time when I can take my future grandchildren for a visit and a glimpse of an old-fashioned Christmas.

This grandma is done with family Christmases – or so I thought
December 23, 2012 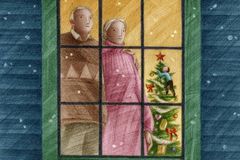