When Zeina Esmail, FASHION magazine's newly appointed fashion editor-at-large, attended Milan Fashion Week for the very first time in September, she got nervous. "Going to the shows is the event of the season in our industry," she says, pointing out that editors and stylists bring their best sartorial swagger to the international presentations, often for the hordes of street-style photographers outside. "It was such a big deal for me."

Esmail, who in the past has always defaulted to dresses and skirts for big occasions, confidently dug out an oversized grey pinstriped suit for the collections one day – a move that inadvertently landed her on popular style blogs.

The suit, it seems, has stepped out of the practical confines of the office and the work cubicle into the domain of high fashion. In the corporate world, trousers are as stiff and dated as Melanie Griffith's Elnett-doused mane in Working Girl . Powerhouse women, such as Marissa Mayer, the new CEO of Yahoo, have shunned them altogether. Today, unashamedly girly execs prefer cinched dresses and printed Oscar de la Renta numbers. Even Hillary Clinton has left her trusty blue pantsuit behind.

But if the trouser suit has lost its workplace lustre, it is gaining, as Esmail discovered, new cachet in less buttoned-up and even high-glam situations – and fashion's forward thinkers are leading the charge. Miuccia Prada, for one, showed little else at Miu Miu and Prada for fall 2012. Marc Jacobs, meanwhile, introduced a fresh formality to trousers at Louis Vuitton, layering them underneath skirts in all kinds of luscious, beaded brocades that give the party dress a run for its money.

"When you think about what you're going to wear for holidays, [consider that] we're coming out of a big dress period," says Susie Sheffman, the fashion director at eLuxe. "A dress doesn't feel as fresh anymore. What feels and looks fresher is a sharp pantsuit, a tunic over a pant or a trouser with a boxy top. It's the idea of a sharper line."

In the 1920s and thirties, it was the genderbending Marlene Dietrich and tomboyish Coco Chanel who introduced women to the idea of trousers. Now, says Esmail, it's red-carpet stars such as Kristen Stewart, who wore a beaded Zuhair Murad pantsuit to a recent Twilight premiere, who are setting the example in terms of formal power dressing.

"We're more acclimated now to the idea that women can wear trousers and be sexy and feminine and stylish," says Lizzie Garrett Mettler, author of the book Tomboy Style , which is based on her blog of the same name. "Designers are creating clothing for the modern-day woman," she adds. "It's the 21st century: Under what circumstance is a ball gown something that you would want or need in this era?"

Indeed, Sheffman points out, it's the women who are done-up and overdressed who, in social situations, are often looking enviously at the rebel in the pantsuit: "It says that she's confident enough to look really feminine and attractive but still be in pants."

The trick, as both Sheffman and Esmail explain, is to opt for curve-conscious shapes and details that reinforce femininity. Sequins and embellished brocades, much like those details at Louis Vuitton, will help. So will a hint of lace or lingerie underneath a crisp white shirt.

Mettler is one of those women who will dress up her trousers with jewellery and lipstick for a party. "To me, it has always been about mobility. When I get dressed, I want it to be in a way that makes me feel like I can do anything."

Mettler references the first scene in the new James Bond movie Skyfall , wherein star Daniel Craig is jumping on and off trains in a slick, tight-fitting Tom Ford suit. "It's that same idea – you want to look nice but you want to go where the night takes you," she says. "If you're functional and mobile and even able to run around, the adventure can follow. There's a freedom and a power to that."

So while Yahoo's Mayer and others like her have succeeded in breaking through the glass ceiling to pave the way toward the emergence of more women CEOs than ever, the notion of the corporate power suit as previously understood may be a thing of the past.

Embracing glamour and adventure in a tuxedo, however? That can still be liberating and exhilarating. 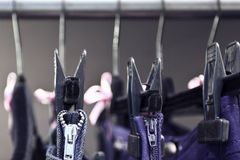 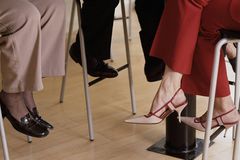