O Christmas tree, how lovely are thy branches. No one is saying that about the huge evergreen towering over Montreal's Place des Festivals, which is both the tallest natural Christmas tree in Canada and the most abused.

Since it was put up this month, the 26-metre Quebec fir has weathered the kind of savage ridicule usually reserved for female TV anchors who don't meet someone's standard of beauty. The tree's top is too blunt and its branches too sparse, people say. It's skinny, crooked and lacks the symmetry we expect from an organic plant dressed up as a symbol. These perceived faults have been hashed over on social media, in The New York Times and in other journals whose readers might have trouble finding Montreal on a map.

Judgment has been especially harsh in comparison with the enormous Norway spruce at New York's Rockefeller Center, which Montrealers were told would be eclipsed this year by a taller evergreen in their town. The New York tree topped out at 27 metres, and won even more bigly by displaying the kind of bushy, conical perfection we demand.

Related: Where Munich makes merry: There's something for everyone at famous Christmas markets

Never mind that it too was crooked and unshapely, when it was found in a backyard in Oneida County, N.Y. Its most conspicuous trait from ground level was a mass of thick branches that sprouted from overhead and reached up into the main canopy, like mutant candelabra. But the New York tree had the good sense to get some work done. Branches were trimmed and perfected through all the arts available to cosmetic surgeons for trees. No way was that spruce going to pose for a million selfies in its natural condition.

The New York tree also has the benefit of a stately placement, in a grand plaza flanked by tall buildings. The Montreal tree's environment is much less favourable. It stands incongruously near a string of small holiday-market kiosks, like a lonely guest with a growth-hormone disorder. It's also right next to a frame from which hangs a huge and hideous clown puppet, whose articulated joints can be jerked into action by kids yanking at cords.

At close range, the tree is less noticeable than the immense metal frame that sprawls at eye-level around its trunk, and the many cables lassoed into its columnar canopy. The poor thing is as bound and trussed as King Kong.

It's also naked, or nearly so. Apart from the small white lights tangled in its branches, the only ornaments are blatantly promotional doodads, every one the same, donated by a national chain store that sells tires and stuff.

Stand well back, and you can see the slight curve in the tree's upper third. Anyone who has spent time looking at forests in Canada would recognize that this fir probably stood on sloping ground, and that the curve was a natural corrective to that placement. Trees with much more pronounced curves often reach out over Canadian lakes and rivers, and no one calls them ugly. The Group of Seven founded a school of Canadian painting on such trees, which stood on the land as God or natural selection made them.

But Christmas trees are not natural, even if they were once alive. They're bound by a Platonic ideal of the holiday tree, which must have a certain density and symmetry, and a more or less conical shape. The giant Montreal tree that meets these requirements most perfectly goes up every year at Place Ville-Marie, and it's not a tree at all. It's a purely synthetic definition of empty space by 13,000 lights strung over a 20-metre frame.

Another giant expression of the Platonic ideal went up at Place Vendôme in Paris two years ago, in the form of Paul McCarthy's inflatable sculpture, Tree. But that green monster also expressed the ideal form of a butt-plug sex toy. The uncouth resemblance led to Mr. McCarthy getting his face slapped at the unveiling by an unidentified Christmas reveller. The work was later vandalized.

At about the time Mr. McCarthy was slapped, I was travelling in Crete, where I saw several big public Christmas trees. All were straight-sided green cones, with no hint of anything as irregular as a branch or twig. Crete's most common tree by far is the gnarly, crooked, asymmetrical olive tree. That tells you something about how widely and deeply the dogma of the perfect Christmas tree has taken root.

"What we delivered is a natural Quebec tree, as a Quebec tree should be," said Philippe Pelletier of the Place des Festivals fir, which was provided by his company, Sapin Mtl. "People have in mind that a Christmas tree should be perfect, but that's not the reality."

In similar terms, others have defended the presence of women in media who are neither pretty nor young, and whose bodies are merely ordinary. Mr. Pelletier is making sense, but I doubt that he is making many converts. We all know how skinny the fashion model should be, and how evenly shaped the Christmas tree.

The funny thing is that the original point of honouring an evergreen during the shortest days of the year had nothing to do with shape. When every other plant in the landscape has lost its leaves or vanished under the snow, trees such as fir and spruce remind us that life persists in the harshest conditions. That would have been a potent message in the days when Quebeckers could eat only what local farms could produce.

O Christmas tree, your branches carry a message that we have forgotten how to read. Persistence, Christianized as faithfulness, is what the old German carol celebrates: "Lovely" is an inexact replacement for "treu," (true, or faithful), which is what the German lyrics say. From the Place des Festivals tree, which I reckon is the most meaningful in Canada, comes this additional newsflash: Nothing outside mathematics is perfect. 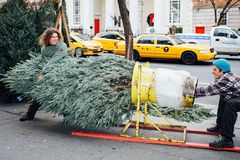 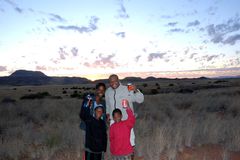 Facts & Arguments
How one sickly Christmas season taught me to say ‘no’
November 30, 2016 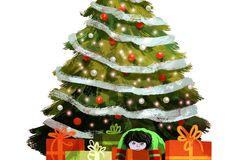