It was Christmas, 1963. I remember some of the gifts I received that year: a reversible skirt, a transistor radio, some long-playing records. There was the ubiquitous box of handkerchiefs from an aunt who either didn't know or didn't care that Kleenex had been invented. Hankies notwithstanding, most of the things I wanted were under the tree that Christmas morning.

The usual large family gathering took place at our farmhouse. Two of my sisters were married by then and had little ones of their own. There were still six of us living at home, my parents included. My brother had a girlfriend that year. We were a typical rural WASP family, perhaps a bit more comfortable than some.

Even though there was always some discord, we all got together to make merry. An overabundance of food was served at midday. There was no alcohol or smoking allowed, but some of the grownups would drift off in the afternoon to various neighbours' homes and sail back later in a mist of cigarette smoke and Scotch vapours.

It was pretty well the same scenario every year but what I remember most about that particular time were the events leading up to Christmas.

Living in a rural community and being too young to drive or date, I depended on a circle of friends to provide entertainment. A yellow school bus would take us to the high school in the nearest town, where we would devise adventures to assuage our endless energy and raging hormones.

As it happened, the father of a large family in the area had died. I don't recall the circumstances, only that it appeared the family was in for a bleak Christmas.

Fancying ourselves little Good Samaritans, we decided to organize a caroling party. About 10 of us would meet at the home of one of the gang in a nearby village, then walk through the streets singing Christmas carols, asking for donations from those who listened and explaining our noble cause as we went. The money we collected would be used to buy gifts for the bereaved family.

It was bitterly cold the night of our big adventure. Our freshly teased coiffures were covered with woollen hats. Hard-packed snow covered the streets, sometimes causing us to slip and fall, our pliable young bones absorbing the shock and sending us into fits of laughter. We slithered and slid along, carrying lights and singing our hearts out. We explained our cause as we went. Some gave dimes and quarters, and there were occasional one- and two-dollar bills.

When our toes were numb and icicles had formed on our mittens, we returned to our meeting place for hot chocolate and treats. The excitement of the evening hadn't worn off. We discussed the possibility of including a new British group called "the Beatles" in our collection of teen idols.

Again we sang, this time changing the lyrics of familiar carols to suit our burgeoning sexuality: "Hark, it's Harold, angels sing/And he's got a really big thing."

I'm sure some of us didn't understand the metaphor. In matters concerning sex, we were not as informed as today's generation.

I was voted one of three to go shopping and deliver the gifts. We decided groceries would be best, so the next day we three (kings?) trooped off to the grocery store. We bought canned goods, powdered milk, some fresh vegetables. We threw in some sweets: candy canes, chocolate. A large box was procured and decorated with Christmas paper.

Now it was time to deliver our offering. The house where the family lived was small, with a rundown appearance that spoke of poverty. There were no Christmas lights hanging from the eaves, no decorated tree shining in the window.

Boldly, we knocked on the door. A girl, about our age, answered. I vaguely remembered having seen her in the halls at school, always poorly dressed and definitely, to our small minds, not one of our gang.

It was hard to read the look on her face. Was it embarrassment, mistrust, anger?

"Merry Christmas!" we shouted and stood there in our pea jackets and sealskin boots, eagerly awaiting thanks, perhaps tears of joy. She folded her arms and stared until her mother came up behind her. Several pairs of curious eyes looked out from inside. Okay, so now we'd get the praise we felt we deserved.

"Just leave it on the step," her mother said, and turned away. Deflated, we went away grumbling.

I'd like to report that we saw the error of our ways, that we befriended the girl on the step and let her in on our dreams and schemes. But the truth is we shunned her even more.

Looking back, I realize our little foray into good deeds was simply an excuse to get together and have fun. We must have harboured some compassion for the bereaved family, but it was lost in our own self-fulfillment.

We didn't understand that pride was probably one of the few things this family had left, and they weren't about to give it up for a box of food delivered by cocky teenagers.

In the season of holiday charity drives, perhaps it is wise to remember, as Goethe so succinctly put it: "The deed is everything, the glory is naught."

Facts & Arguments
Dear me: confession of a selfish Santa
December 19, 2012 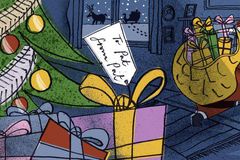 I love Christmas shopping with my wife
December 10, 2012 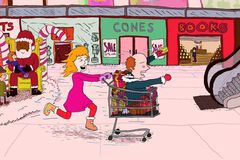