Glad tidings, followers of the Peter Jackson film adaptations of J.R.R. Tolkien's stories of Middle Earth. The second film in the trilogy of movies based on the 1937 fantasy novel, The Hobbit, is a big improvement from last year's first entry, The Hobbit: An Unexpected Journey. With the introductions and bag-packing out of the way from the first film, the new movie jumps straight into the action and doesn't relent until the cliffhanger ending almost three hours later. The ending was effective enough to leave the audience at an advance screening shouting a collective "Aww!" of disappointment as the credits began to roll. They'll have to wait until Dec. 14, 2014 for the wrap-up.

In last year's The Hobbit: An Unexpected Journey, there was a lot of preparatory business to get out of the way, as the hobbit, Bilbo Baggins (Martin Freeman), was recruited by the wizard, Gandalf (Ian McKellan), to join 13 dwarfs on a quest to reinstate their leader, Thorin Oakenshield (Richard Armitage). Their mission was to reclaim Oakenshieild's hereditary throne inside the Lonely Mountain, which was occupied by a massive fire-breathing dragon, Smaug, resting atop a heap of treasure.

Whether you find director Peter Jackson's work majestic and whimsical, or just bombastic and twee, his Tolkien films have created an indelible set of cinematic images over the past dozen years. From the swooping and looping cameras over splendid New Zealand terrain, to the legions of clammy, gnarly and ethereal creatures.

The trouble is, as he shovels on the visual awesomeness, the characters can feel like cutout figures bobbing about against a gorgeous diorama. Nothing much has improved here on that front. Jackson and his writing team (Fran Walsh, Philippa Boyens and Guillermo del Toro) have augmented Tolkien's Hobbit text, much of it consists of sequences where Bilbo and the dwarf friends get captured, escape and get confined again, between battles with blood-thirsty Orcs.

Ian McKellen's Galdalf, our standard of all that is trustworthy, disappears for a long stretch of the film. Even the protagonist, Bilbo, though showing some fresh swagger and the stain of greed since acquiring the ring of invisibility in the first film, fades back into the ensemble of dwarfs. In a presumed effort to add some emotional heft and continuity with The Lord of the Rings, we get a guest appearance from Legolas (Orlando Bloom), the flaxen-haired elf from the LOTR trilogy. There's also an invented female elf, Tauriel (Canadian actress Evangeline Lilly of the TV show Lost), a welcome, elegant feminine presence in a story overrun with hirsute males. No wonder the screenwriters couldn't resist providing her with some non-canonical flirtation with the handsome dwarf, Kili (Aidan Turner), who she has taken prisoner.

"Aren't you going to search me?" he asks. "I could have anything down my trousers."

"Or nothing" she replies.

While not exactly Hepburn and Tracy, this flutter of sexuality slightly raises the script's age level. Other humour here tends to be more juvenile, as Bilbo and the dwarfs do things that make them stinky. With the help of barge man and smuggler, Bard (Luke Evans) – a doughty human of whom we'll hear more later – the gang are forced hide under piles of fish and, later, crawl up latrines to enter the economically depressed port town of Lake-front.

This medieval community of workers and scoundrels under an epicene leader (a droll Stephen Fry), offers a brief respite from the gallery of exotic creatures. The best of The Desolation of Smaug is saved for the last, when Bilbo goes to steal from the massive fire-breathing dragon, Smaug. The orange-eyed beast is voiced by Benedict Cumberbatch, who, through a sludge of voice-altering electronics, seethes and preens between fiery exhalations; this scene is one of the few occasions in the film where anyone actually takes time to talk. The sequence echoes the best part in the first movie, Bilbo's encounter with Gollum, with language that is menacing and riddle-filled. The treasure cave also encapsulates Tolkien's developing theme, that greed is a trap, indistinguishable from a dungeon. 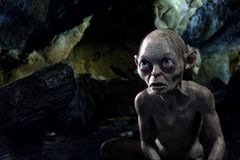 Life of Pi, The Hobbit, Anna Karenina: There's a holiday film for everyone this season
November 16, 2012 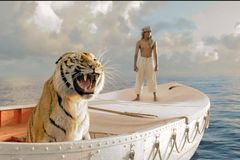