It’s beginning to look a lot like … November? With a strong El Nino causing Mother Nature to rethink her usual schedule, much of Canada is experiencing warmer than normal temperatures this December. Winnipeg set a new record with a high of 10.6 degrees last week, trench coats have replaced winter jackets in Toronto and even Whitehorse is uncharacteristically balmy (well, for the Yukon). And while not sweating under layers of winter accoutrements as you hit the mall for gifts is a welcome change, the lack of sparkling snowflakes and roaring fireplaces can make it hard to get into the holiday spirit. But if your festive cheer needs a kick-start this year, it’s not too late to head somewhere that has Christmas down to an art.

Light it up: Brighten your mood

The 140-metre-long Capilano Suspension Bridge in Vancouver is impressive year-round, but it truly shines in winter. For the 10th time, the Canyon Lights event (on until Jan. 3, 2016) illuminates the bridge and surrounding park with thousands of bulbs. Along with braving a walk 70 metres above the Capilano River, visitors can see what is touted as the world’s largest living Christmas tree (at 153 feet tall) and try out VocaLites, a new interactive light display. capbridge.com. 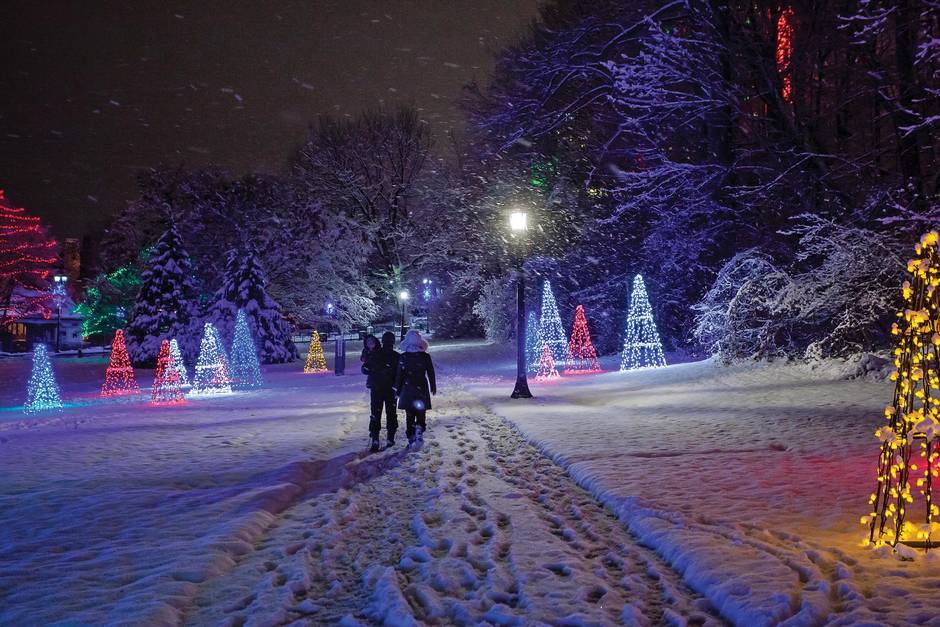 The mild weather has upsides: Visiting Niagara Falls in December often involves mist turning your hair into an icy crown. But you might be able to leave the tuque at home while checking out the 33rd edition of the Winter Festival of Lights, on until Jan. 31, 2016. Take Aura – Let It Glow, a five-kilometre outdoor display presented by Niagara Parks that spans the Niagara Parkway, Dufferin Islands and Queen Victoria Park. A few of the scenes are not exactly on theme (Teenage Mutant Ninja Turtles, anyone?) but free fireworks (visit wfol.com for the schedule) and nightly illuminations of those incredible falls make up for any tackiness. And, hey, it is Niagara Falls. niagaraparks.com; wfol.com 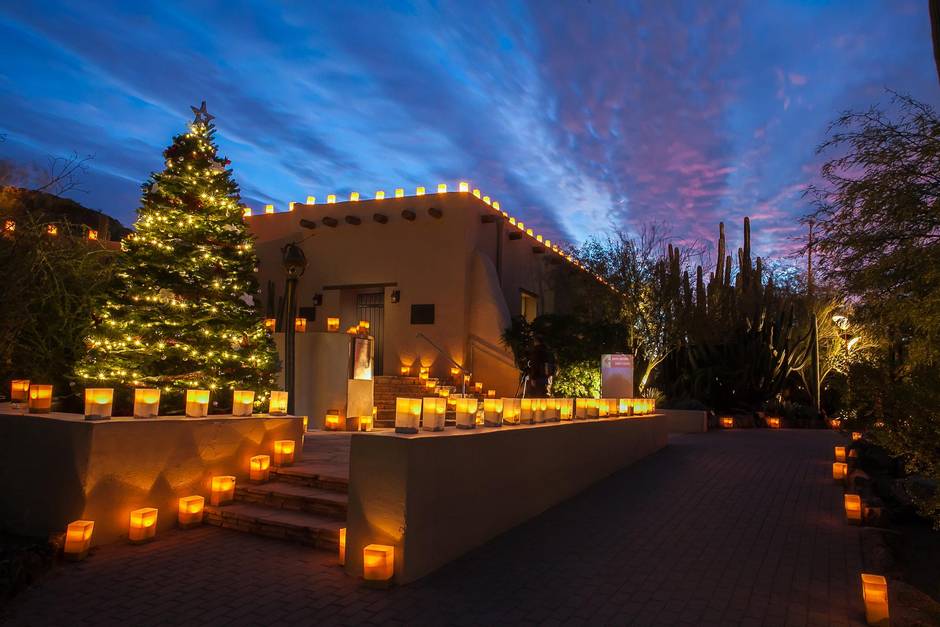 Las Noches de Las Luminarias in Scottsdale, Ariz., is an entirely different take on Christmas lights. Eight thousand paper-bags lanterns line the trails of the Desert Botanical Garden, bathing the Sonoran Desert in a warm glow (until Dec. 31). No snow, but the effect is magical. Making this year’s display extra-dramatic is Bruce Munro: Sonoran Light, eight site-specific installations by the British artist that range from 58 dazzling multi-coloured towers rising among saguaro cacti to 30,000 spheres on a nearby hillside (on until May 8, 2016). dbg.org

Snug as a bug: Escape the family visits

The Dream Hotels chain has transformed its New York properties into two distinct winter wonderlands. At Dream Downtown, the lobby and bar are now “Manhattan’s only ski lodge.” The makeover includes fur and plaid throws, log furniture, an antique toboggan and even a snow machine. Dream Midtown is more for the kids – or at least the young at heart. Its holiday toy workshop theme comes to life with a giant teddy bear, a decorated two-storey fish tank and countless gift boxes (and a chance to donate an unwrapped present to charity). Rooms from $325 and $245US, respectively; dreamhotels.com. 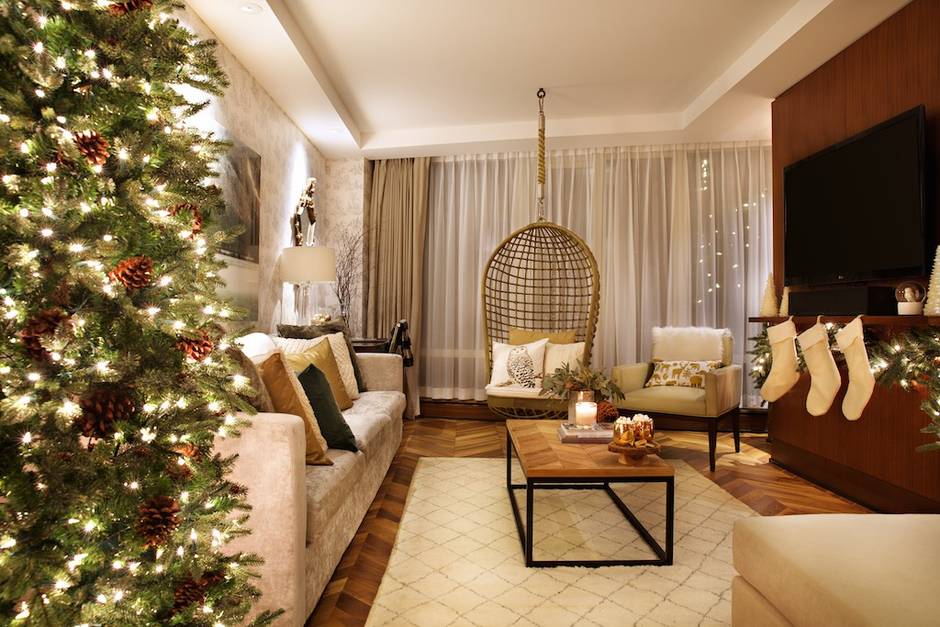 House & Home design experts teamed up with Toronto’s Shangri-La Hotel to offer guests a Winter Wonderland this season (until Feb. 1, 2016). The room usually known as the Garden Suite boasts a subtle, wintry look with chic snow globes and white stockings begging to be stuffed. Birch reindeer and loads of green garlands await on the private patio. Starting at $3,030CAN including breakfast for two and valet parking; shangri-la.com/toronto 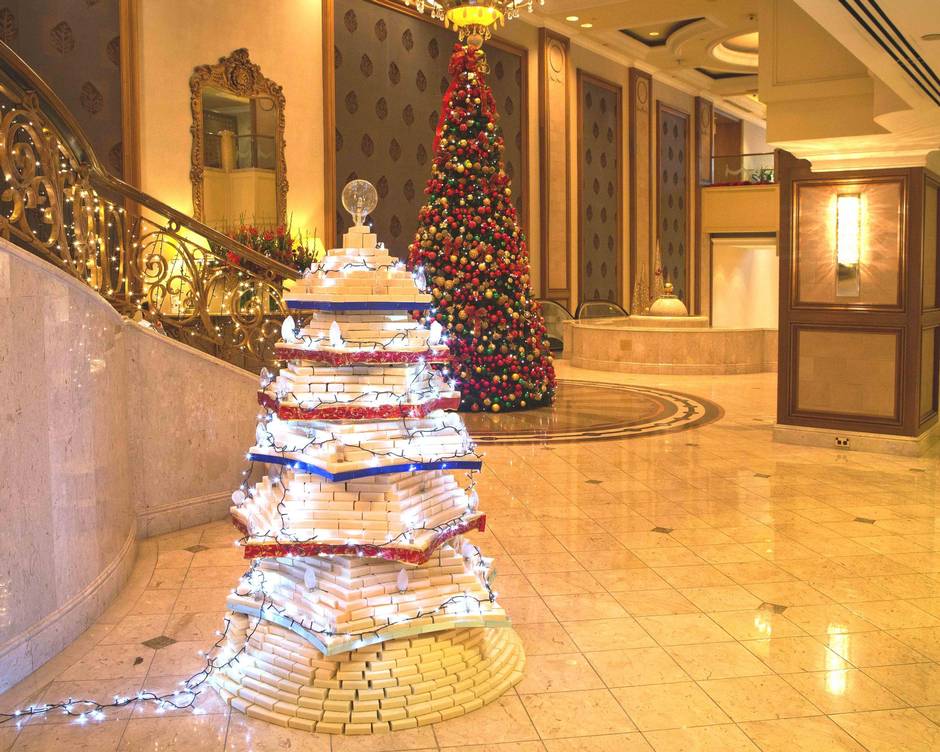 This year, Langham hotels took on the challenge of creating completely sustainable Christmas trees: nothing could be bought new. Some of the creative results include trees at the Langham outposts in Boston (constructed using old stationery that was set to be recycled) and Hong Kong (discarded pipes), and at the Chelsea Hotel in Toronto (decorated with seed ornaments and popcorn strings for local birds). langhamhotels.com

Vancouver’s Fairmont Pacific Rim lives up to its luxe reputation with a high-fashion tree. The result of a collaboration with Versace Home Vancouver, it is actually a stack of Versace chairs – some turned upside down – adorned with the designer’s home accessories. If that’s too avant-garde for your taste, a 15-foot traditional tree (albeit also styled by Versace) graces the lobby. fairmont.com/pacific-rim-vancouver.

In Chicago, the Hilton hotel, an iconic building that dates back to 1927, has been recreated in delicious, exacting detail. The festive version of the massive building stands more than six feet tall and was created using 16,000 little gingerbread bricks over the course of 250 hours. hilton.com/chicago

The Ritz-Carlton Toronto does one better: Its house – decorated with more than 250 pounds of icing and candy – took almost 500 hours to build. Big enough to stand in, it was mixed up using 200 pounds of flour, 75 pounds of sugar, 60 pounds of shortening and 12 pounds of molasses among other ingredients. ritzcarlton.com/toronto

And if that’s not enough, 11 Great Wolf Lodges in the United States, plus the Canadian location in Niagara Falls, are home to dine-in gingerbread houses until Jan. 3. Up to six people at a time can enjoy breakfast, lunch or dinner, and the $20 dining fee goes to Ronald McDonald House Charities. Reservations are required. greatwolf.com.

St. Nick: When nothing else will do

In Elf, that modern Christmas classic starring Will Ferrell, Santa Claus refuses to reveal himself to the public. “Christmas spirit is about believing, not seeing,” he explains. “If the whole world saw me, all would be lost.” But sometimes it takes that white beard and a hearty “Ho, ho, ho” to put you in a festive frame of mind. Even if it is on a boat in the Hudson River. The Lunch with Santa cruise from Spirit of New York lets believers of all ages dine with North Pole’s most famous resident while enjoying fantastic view of the Manhattan skyline. $32.95 for children/$54.90 for adults; spiritcruises.com

Or you can really confuse the kids by vacationing at the Walt Disney World Swan and Dolphin Hotel. Here, Santa and Mrs. Claus greet guests in Florida-appropriate outfits: shorts, sunglasses and sandals. A second Santa – made of chocolate and weighing about 2,000 pounds – hangs out in the lobby in his more customary attire. And there you get a guaranteed “snow fall” every day. Hey, it’s better than no flakes at all. Rooms from $159US a night; santasfavouriteresort.com.