The slope is difficult to discern in the flat light. Shadowless, its features smoothed by storm snow, I struggle to gauge its steepness from the scattered spruce. At 2,150 metres in elevation, I'm at the top of Telephone Gullies, a north-facing, backcountry ski run in McGillivray Pass, in the Chilcotin Mountains, north of Whistler. My guide, Ross Berg, stares downhill, as blowing snow swirls around the group.

Young and capable, he drops in making hard slashes to test the slope's stability. He's trying to trigger an avalanche, and if he does, not go down with it. I've often thought that being a ski guide is the coolest job on Earth, but right now, not so much.

I arrived yesterday on a four-day trip with Whitecap Alpine, a backcountry ski tour operator. Coming from Vancouver, I made the 25-minute drive past Whistler on Hwy 99 to the town of Pemberton, where I caught a helicopter flight to the McGillivray Pass Lodge, Whitecap's base at 1,860 metres. Although it's not far from Canada's best-known ski resort, it's a world away. In this rugged white wilderness, there are no chic bistros, spas, chairlifts or many other people. But for the skiers in my group, that's the attraction.

After Berg disappears from view, and the slope is deemed safe, our group follows, one-by-one, carving big swooshing turns in light, airy powder. I ski close to the others for reference, to avoid the disorienting sensation of being lost in white. The run drops 300 metres over a kilometre or so. It's short but exhilarating. We keep going and by the end of the day, have climbed up and skied down more than a vertical mile.

Alpine ski touring is often confused with cross-country skiing. With its roots in mountaineering, the sport today combines the cardio fitness of climbing mountains with the excitement of skiing remote, untracked slopes. Specialized, lightweight, fat skis with heel-lift bindings are fitted with synthetic skins for ascending. Bindings are locked and skins removed for going downhill. Snowboarders use split boards, a modified snowboard which separates into two wide skis for climbing with skins.

"The sport is definitely growing," says Brad Harrison, executive director of the Backcountry Lodges of B.C. Association. "A lot of the growth is coming from [resort skiers]. People want to try something different, to experience powder, the fitness and adventure."

The next morning, it's snowing as the group sets out. I climb through glades of alpine fir, lightly dusted like fairy-tale Christmas trees, and am soon down to my base layer. While the ascent is tiring, the rhythmic gliding of skis on snow feels easier than humping up a hiking trail in the summer. High on the shoulder of 2,380 metre Star Mountain, the trees become stubby and sparse, until there are no more. The clouds lift and I finally get a view. The peaks are not dog-toothed and dramatic like the Rockies, but rough, dome-shaped, whittled down by ancient glaciers – and there's skiable terrain in every direction. The group makes a long descent, on a run aptly named Sparkle Bowl. But by early afternoon the weather window has closed and we retreat to the lodge in a winter storm.

There's something about returning to a rustic log cabin in the mountains after a day's skiing that warms you right through. Perhaps it's the wood stove or the scent of fresh baking, but I've never felt the same going back to a hotel. The 2,000-square-foot McGillivray Pass Lodge was built in 1972, by a pioneering Austrian couple, Helmet and Christa Weinhold, and is one of the oldest in B.C. Today, it's managed by father and son team, Ron and Lars Andrews. The lodge is quaint and cozy, but guests need to bring their own sleeping bag. Meals are hearty and high-calorie; we dined on lasagna, butter chicken and baked salmon, and evenings give us a chance to relax in the wood-fired cedar sauna, before heading to the lounge room where beer is on tap and conversations flow easily.

On the last day, I leave the lodge early to get in some turns before the midday heli-flight out. Twenty centimetres of snow has fallen overnight. Clouds hang in the valley below like wispy smoke. I drop onto a run called Full Frontal, directly above the lodge. I'm getting the hang of skiing in flat light, feeling the slope steepen, turning faster. Then my ski tips go skyward and I'm on my back, like a turtle, arms splayed out. I've skied up a wind lip (a ramp that's invisible in untracked snow). "Thanks for spotting that," laughs Gerald, another skier in my group, as he glides past.

I must I look like a kid making a snow angel, so I smile, and move my arms back and forth.

Pemberton, B.C., is located 33 kilometres north of Whistler. Most guests spend a night in town prior to the early morning 25-minute helicopter flight from Pemberton Airport to McGillivray Pass Lodge.

Whitecap Alpine runs trips from late December through mid-April. Skiers need an upper-intermediate level of downhill ability and guides will ensure guests are up to speed on avalanche safety precautions. Three-day, three-night trips start at $1,400 and include meals, accommodation, guiding and helicopter flights. A seven-day trip runs $2,250.

Pemberton Valley Lodge is a large, comfortable hotel close to downtown Pemberton (pembertonvalleylodge.com). Another choice is Pemberton Gateway Village Suites (pembertongatewayvillagesuites.com) in the centre of town. It consistently gets good reviews. Rooms start at $129 a night for both hotels.

In Pemberton, stop at Mile One Eating House for gourmet burgers at near fast food prices, a fantastic selection of local beers, and six B.C. wines on FreshTAP (mileoneeatinghouse.com). For more upmarket dining try The Pony (thepony.ca). Lighter appetites should check out Blackbird Bakery. It's run by a pair of professional chefs and specializes in fine pastries, breads and coffee (blackbirdbread.com).

The writer travelled as a guest of Vancouver Coast and Mountains Tourism and Pemberton Tourism. Neither agency reviewed or approved the story.

Take your baby hiking in the backcountry
August 22, 2012 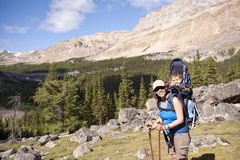 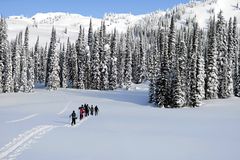 What's the best time for backcountry skiing in Quebec?
November 25, 2010 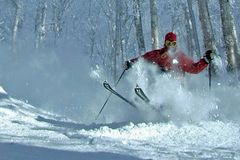 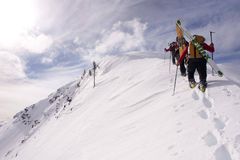