When Toronto-based craft blogger Gabriela Delworth goes on her perennial hunts for gift wrap, she looks for the Goldilocks level of paper weight: not too heavy and not too light.

Thick, stiff papers always do the opposite of what you want, she says. "The paper needs to be thin, but tough. Embossed papers are thick - once you fold it, it's creased and will stay like that."

"One year we got this super deal and it was cheaper quality paper and it ripped easily. You want to be able to tug on it without it ripping," she says.

Globe Style selects the prettiest of the season

Pack it in a box

Vases, stuffed animals and mittens can go from inanimate objects to unruly little beasts when you try to wrap them, so Ms. Fulton places such oddly shaped gifts into boxes whenever possible to make wrapping a cinch.

You can purchase boxes from stationery stores or wholesalers, but a more economic option is hitting up housewares or trinket retailers, Ms. Fulton says.

"All the stuff they have out on display they have in boxes in the back," she says. A simple query to a clerk at Hallmark or Bowring could reward you with a perfectly sized free box.

Envirosax, a line of reusable polyester totes, are flying off the shelves, says Suzanne Fox, the store's manager and buyer, who ordered another shipment of the product last week. The bags come in an array of charming prints: damask, camouflage, animal and Japanese-inspired to list a few. A video tutorial on Envirosax's website shows how they can be transformed into gift wrap - complete with a bow - and then used later by the recipient to haul groceries home.

"Really, the price of paper gift bags has gone up. It's just a couple extra dollars … [to]give somebody something they can use over and over again," Ms. Fox says.

Shawn Gibson of home accessories shop Teatro Verde in Toronto shows you his tips and tricks.

Customers of Paper Things are also snapping up Waste Not Paper, a brand that boasts eco cred: The paper is sourced from sustainable forests and is made from recycled content.

Conceal your mistakes with flair

Ms. Delworth is a stickler for measuring the right amount of paper before she brings out her scissors, but not all the rest of us are. If you've made a gaffe and end up with too little paper, just use your leftovers to cover it up, she says.

*And don't do this

Use too much tape, because it'll make your package look messy and kill the recipient's ability to reuse the paper.

If you're really lazy...

OK, you're down with spiked eggnog but could do without fumbling over tape.The Onion's got you covered. The gag news company sells Decoy Gift Boxes: cardboard containers that are misleadingly covered with labels for useless ephemera one may see peddled on the Shopping Channel. They feature absurd fictional goods such as a USB-powered toaster and visor-ganizer: a black case that straps onto the beak of your hat and can allegedly "carry up to seven pounds with four handy storage areas." Hey, at least it keeps the element of surprise alive.

For the picky people on your list, go for tailor-made gifts
November 27, 2010 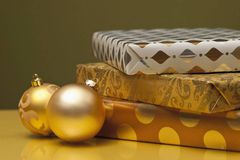 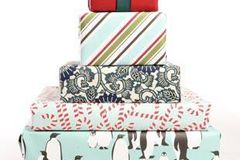