In early April, about a month into the COVID-19 lockdown, Daniel Rotsztain, an artist, writer and cartographer living in Toronto, built what he calls a “social distance machine.” Imagine a giant hula hoop, jutting two metres in all directions, worn around the neck like an Elizabethan collar, minus the Shakespearean ruffles.

As Rotsztain filmed, his friend Bobby Gadda donned the contraption and tried to walk around downtown streets, sidewalks and parks. Invariably, his device bumped into just about everything – people, construction hoarding, the sides of buildings. Absurd? A little. But the resulting YouTube video, viewed nearly 385,000 times, illustrated an important point. “We were being told to stay two metres from other people,” Rotsztain says. “Often, that involved stepping into the road, into a live lane of traffic. That’s not safe.”

Canada’s cities, with their narrow sidewalks and car-clogged roads, were simply not designed for physical distancing. As COVID-19 continues to force us apart, designers are looking for ways to rethink the spaces and places where we live with wellness in mind. But not just with new bike lanes and car-free roads (both of which increased in Toronto after Rotsztain made his video): The inside of our homes, parks and playgrounds are also getting a health-focused rethink.

If cholera led to the invention of the modern sewage system and, by extension, the toilets that link into it, COVID-19 might lead many North Americans to finally embrace bidets. California-based bidet-maker Brondell has seen a 300-per-cent jump in interest since March. Many clients of Toronto interior designer Nora Voon have been asking for them, freaked out by the prospect of toilet paper shortages. “Copper handles, faucets and fixtures are particularly popular,” says Voon, adding that copper is naturally anti-microbial, killing viruses, including COVID-19, faster than other metals, plastics and glass.

Beyond bidets, Voon, founder and principal of Noda Designs, says “a lot will change” in our homes as a result of COVID-19. Some of the shifts will be small, yet practical. Pantries might get larger, to cut down on the need for extraneous grocery runs. Extra bathrooms can help if someone in a house becomes infected, making in-home distancing easier. “People want more sinks in general,” Voon says. “There’s increased attention to handwashing. I’m being asked for sinks in mud rooms, so people can scrub down as soon as they come home. I was never asked for that before.”

Outdoors, the concept of the Victory Garden is making a comeback. The idea throws back to the Second World War, when Canadians grew their own backyard produce so the gas and oil used by farms could instead by sent to the front. According to Martha Kantorczyk, a member of the Mississauga Master Gardeners, an association whose mandate is to give free, useful advice to amateur green thumbs, one of the upsides is that space needn’t be a constraint.

“You can grow just about anything in container planters and hanging baskets on a condo patio,” she says. And it’s not too late for vegetables. Whereas tomatoes, peas and cucumbers are typically planted in early spring, “there are fall vegetables that can be started inside now and moved out as the weather gets cooler. Kale, for example, does really well in colder weather.”

For homeowners with lots of space and big budgets, Voon is planning elaborate garden revamps, including outdoor kitchens and alfresco living and dining set-ups. “Swimming pools are becoming more popular,” she says. “People are looking for ways to entertain themselves and friends outside, while keeping a distance. The trend used to be to bringing the outside in. Now, it’s bringing the inside out.”

Some designers are trying to facilitate such backyard hangs with extreme precaution. Multinational architecture studio Scott Brownrigg, based in England, has designed something called the Social Contact Pod. It’s basically a prefab box that can be trucked to someone’s lawn and set up in a day. It works a bit like a prison visitation room, albeit a fancy one, lined with big windows and blond woods. Each party enters through separate doors and are kept apart by a plexiglass divider, ensuring no one shares the same surfaces, let alone the same air.

If space is tight, the thought of gathering in a public park might be tempting, although it can also be anxiety inducing. It is hard to know, just by eye, whether friends and family are keeping their two-metre distance. Some municipalities have tried to help by painting circles, six feet apart, on park lawns. For where that doesn’t exist, London-based designer Paul Cocksedge has released something called Here Comes the Sun. It’s a free DIY pattern, downloadable through his website, for a picnic blanket that marks out exactly where to sit to stay six feet from others. It’s like the anti-Twister board, with spread out dots.

Equally daunting while in a park: where to go to the washroom. Many public toilets are locked for the foreseeable future. A Dutch company called, fittingly, Lapee, has invented a moveable, outdoor urinal – specifically for women. The pavilions could easily be mistaken for a swirling, pink Richard Serra sculpture, all folding, overlapping walls. There are no doors. Women need only walk in, squat over an ergonomically positioned receptacle and clean their hands with built-in bottles of sanitizer.

Among the more upsetting signs that COVID-19 has disrupted modern life, especially the lives of children, is the site of yellow caution tape draped across so many playgrounds. “I can only imagine how distressing that is to a child,” says Nathan Schleicher, a playground designer at Ontario’s Earthscape Play. “I respect the need for quarantine. I also know that kids need to play, and to play with each other.”

Two German designers, Martin Binder and psychologist Claudio Rimmele, have envisioned a playground that keeps children at least two metres apart, separated in shallow, lily-pad-shaped platforms, each with their own individual entrances. Some activities span pad-to-pad, such as see-saws; others are solo, such as sandboxes connected by a network of speaking tubes (like cans on a string, but nicer looking) to encourage conversation, if not direct contract, during play.

Schleicher has a simpler suggestion: Build more playgrounds to help prevent overcrowding, and follow public-health recommendations for cleaning shared equipment. “Many playgrounds will be worth going back to after the pandemic,” he says. “They don’t all need to be redesigned. We may just need added protocols to keep them safe.”

Mahgoub-Desai points out that there are lots of underutilized spaces in our cities that could be turned into additional parkettes and small play spaces. “Because of the pandemic, we’ve seen parents bring their kids to bike around parking lots,” she says. “There’s no reason those spaces can’t also be beautiful, can’t also have this wonderful, extra purpose to them.”

How restaurants, bars and hotels are creatively adjusting to pandemic restrictions
August 6, 2020 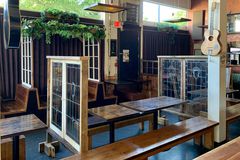 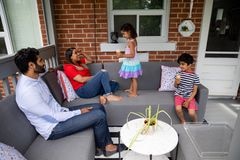 How to address air quality at home through design and decor
Subscriber content
June 11, 2020 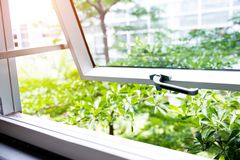