Rosalinda, one of Toronto’s newest vegan restaurants, was conceived to celebrate all things plant based. But as interior designers Brenda Bent and Karen Gable were coming up with the concept, they quickly learned that installing a functioning greenhouse in the space would be impossible.

The restaurant is on the sunless ground floor of an office building in the shadow of myriad other downtown towers.

To cheat an Edenic effect, Bent and Gable (who have also created restaurants for musician Drake and chef Susur Lee, who is Bent’s husband) used dried moss instead. The crinkly, emerald undergrowth fills a glass enclosure at the front desk, pokes out of a wall of bricks, and creeps between a series of potted ferns. Because it’s no longer living, the moss needs no sunlight or water. It’s also preserved in a natural salt solution (similar to the brine that keeps tofu fresh) so it won’t decay. “It’s really pretty,” says Bent. “And it would be almost impossible to find something that green except on a manicured on golf course.”

Rosalinda is one of many recently designed spaces using dried moss as a feature. It’s also cropping up in hotels, offices and homes for its lush, versatile look and its unique practicality. Aside from the rich texture, some varieties grow white or grey so they can easily be dyed a multitude of hues. And the sponge-like structure acts as a natural dehumidifier (sucking up sticky moisture in the summer and releasing it again during dry winter days) as well as a sound buffer.

“The moss has worked really well to tamper the echo from all the concrete,” says Bent.

Polarmoss is one of the world's oldest purveyors of the plant. The company is based in Hailuoto, Finland, a small island that has the cool, damp forests necessary for abundant growth. The company has roots that date back more than 80 years, and originally foraged the moss for use in fancy flower arrangements (the moss isn't farmed but grows naturally in the woods, and is only harvested by specially trained pickers so as not to deplete the stock). Five years ago, the company noticed an uptick in demand for interior applications and started making rectangular sheets (available in 15 colours, including bright pinks and purples) that can be cut to size and arrayed over both small and large surfaces, from picture frames to condo lobbies. Today, they ship their product all over the world from Manhattan to Munich to Dubai.

It was co-founded three years ago by Carl-Oscar Pressfeldt, who first started working with the material in 2013 when he was an engineering student at the University of Lund. With one of his professors, Pressfeldt ran a series of tests to evaluate how sound transmits through locally grown Reindeer Moss. “What we found is that it does a better job than many synthetic products,” he says. “It earns the highest possible rating for sound absorption.”

This useful quality is one of the major reasons many businesses, including Apple, BMW and Ikea, seek it out for their clattering offices.

But, according to Pressfeldt, its decorative nature is just as important.

“I started working with it for its acoustic properties,” he says. “But when I see people interact with it, that’s how I know how beautiful it is. It brings a surprise element of nature indoors, which I think is something people need more and more in their lives.”

The connection to the great outdoors is evident in the new Calgary head office of Re/Max realty. Walking into the lobby, a homebuyer would be forgiven for thinking they were in the wrong place. Instead of the typical, colourless corporate doldrums, a vibrant, green carpet of reindeer moss, cut at sharp angles, wraps around the glass and wood enclosures of twin meeting rooms.

Designer Majida Devani, principal of Building Bloc Design and the creative director of development company RNDSQR, wanted the transparency of the glass to create an open, dynamic vibe. But she also knew the spaces had to provide privacy for people to have important, deal-making meetings. “It’s nice because you can see into and out of the spaces,” says Devani. "The realtors also seem a lot happier,'' she says. “The moss has made people want to spend a lot more time in the space.” 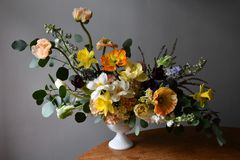 The design trends and brands soon making their way into your home Subscriber content
September 11, 2018 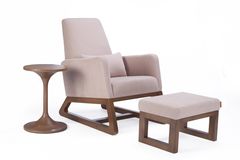