Lindsay Cameron Wilson is a storyteller at heart and her kitchen – in addition to being a place for roasting, basting and broiling – is where she cooks up stories.

The best-selling cookbook author is also a food stylist and host of The Food Podcast (recent episodes feature Alexander McCall Smith on etiquette, and a disquisition on the humble, oft-rumpled staple, the tea towel ). It’s here, in her kitchen, perched at (or sometimes atop) her Caesarstone quartz island, that she writes scripts, photographs food and generally enjoys the light from the south-facing windows. “[It] can be quite harsh, or soft. It does kind of inform the story of the food because the light changes,” she says. “I love that spontaneity.”

The house, in historic Schmidtville, Halifax, dates from 1850, when the community bustled with tradesmen and artisans. “The house was built by a merchant, while the smaller houses on neighbouring streets were said to be owned by bookkeepers, bakers and candlestick makers,” says Cameron Wilson. Her sister, Lee Cameron Surrette, lives in one of those, “and reminds me of this all the time,” she says. Cameron Wilson and her husband, James, returned to Halifax after a four-year stint in London, England – though Schmidtville wasn’t their first stop. “You don’t picture yourself living down the street from your junior high school, which is where we moved,” she says. But, soon after, the family relocated to the Georgian-style Victorian. “We found a new neighbourhood and made it ours; made the city new for us.”

What is now the kitchen was, for 167 years prior, the dining room, “complete with a servants’ bell to summon the staff from the basement kitchen,” says Cameron Wilson. The latter is long gone – “along with the staff,” she says – and in 2017, the couple decided to renovate. Cameron Wilson and her sister, an architectural designer who helped create the space, maintained a delicate sensitivity to the room’s original character and function. “Where kitchen designers tend to say, ‘Okay, capture the triangle, how are you going to move from fridge to stove?’ ” she says they approached it from an architectural perspective, thinking holistically about light, flow and maintaining balance and proportion (important attributes in Georgian-style architecture).

The fridge and dishwasher are hidden behind panels, and the cupboards are painted to match the walls (Benjamin Moore’s Moonshine, says Cameron Wilson), with molding to mimic the ceiling. The hanging light fixture, from Ralph Lauren and purchased at local shop 31 Westgate, is akin to what you’d find over a dining table, with large globes that are easily washable, since “kitchen grime is so unique, like honey,” says Cameron Wilson. Two vintage runners, a nod to the previous owner who had a penchant for Persian rugs, were picked up at an auction. And the painting above the original marble fireplace is by Toronto artist and friend Andrew Rucklidge. “It was our first art purchase and it’s travelled with us, informing our colour schemes ever since,” she says.

Cameron Wilson calls it a “secret, camouflage kitchen” that, despite being highly functional, doesn’t “scream kitchen.” Her sons, Luke, Charlie and Rex, aged 14, 12 and eight, respectively, make dishes that range from bowls of cereal to omelettes, do their homework and even dance here. The space, refreshingly unprecious, supports all these functions. For her part, Cameron Wilson is making an effort to appreciate beautiful things, not store them away for a later, or worse, never-arriving, date. She recalls receiving a delivery of eggs from a friend’s nearby farm. Tucked inside was one special-hued egg. “And I was not eating the blue one,” she says. “Then I thought, screw that. From eggs to china to wedding gifts to art … I’m really trying my best to use my things, wear my clothes, hang art in the bathroom even,” she says. 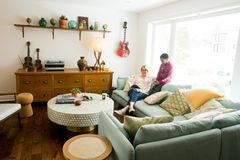 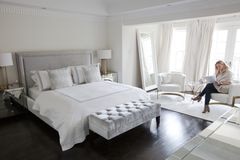 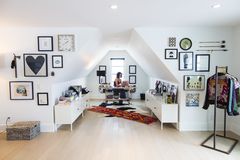