In the hamlet of Greensville, Ont., about an hour’s drive west of Toronto, the historic stone house Springdale sits on a parcel of land that the British crown granted to an army colonel named John Showers in 1797 shortly after the American Revolution. He built a small homestead there.

A few decades later the 31.5-hectare plot of land and the humble house was sold to a local wealthy industrialist named Joseph Webster Jr. He built the stately Georgian manor that has been an architectural landmark in the area for the past 223 years.

The house, made of cut stone, has changed hands many times in the past two centuries and today it’s owned by Richard and Charlotte Rumi, a semi-retired couple who are antique dealers from nearby Oakville, and the perfect duo to care for a home with such a rich history and so many stories to tell.

Favourite Room: Tiles and statement appliances give this Calgary kitchen a creative facelift

The Rumis bought the 3,300-square-foot house in August, 2018 and did a nine-month renovation that included the kitchen, bathrooms, painting every room and fixing up a dark basement where one of the previous owners had built a small chapel, with a few church pews.

“No one is sure who built the tiny chapel, but that is part of the wonderful charm of the house,” says Richard Rumi, who adds it now sits on a 0.6-hectare parcel of land in the middle of the Dundas Valley Conservation Area. “It’s the kind of house that has an energy to it and also a certain mystique. We didn’t renovate so much as restore, conserve, preserve and beautify it.”

The one room they barely touched, however, was the sunroom, which only required a few cosmetic tweaks. “It was perfect as it was,” he says of the room where he and his wife sit and read, and entertain guests with cocktails before dinner. “We love the red-brick floor, the dark beams and the nine-over-nine Georgian windows that seem to invite the outside in. It’s an incredibly peaceful place to be.”

When they bought the house, the panes in the sunroom were a pale pink. Sherwin Williams’ Tuxedo Grey paint gave the room a bit more gravitas. The dark windows were offset by light walls freshened up with Farrow and Ball’s Pointing, a creamy white.

Then came the fun part, which for these avid collectors, meant adding furniture, artifacts and artwork that they had accumulated from 30-plus years travelling and operating Rumi Antiques (which they continue to run from Dundas) and Rumi Galleries in Oakville, (now owned and operated by their son, Joseph).

Points of interest are everywhere: a carved ebony monkey hangs playfully from the ceiling; a 19th-century Philippine carved land marker (an exotic property post) stands in a corner; a 19th-century French faience (fired ceramic) cat and bird sits on an English Pembroke table (circa 1780); and a solid bronze putti (a cherub) hangs over the door.

They also inherited an unexpected keepsake: a solid bronze-plate and copper Union Jack that hangs over the stone mantle. “It was here when we bought the house and of course it’s something you would never touch,” Richard says.

Charlotte, who did the interior design of the house, rescued the zebra carpet from a Toronto antique dealer who was going to throw it out because it had a hole. “We simply lined the back of it with a fine leather,” Rumi says. “Normally you put these types of things on the wall, but Charlotte was adamant it would look great on the floor. She was right, as usual.”

Rumi says Webster built the house as a throwback to the grand country houses built by the aristocrats in Britain – though obviously on a much smaller scale. “It’s a secluded paradise and we pinch ourselves every day that we live here.” 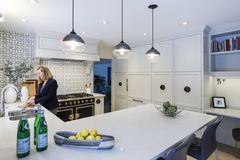 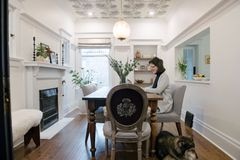 Favourite Room: The master bedroom in this remodelled Toronto home is a balance of luxury and convenience
Subscriber content
February 6, 2020 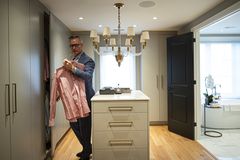